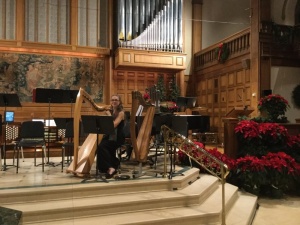 The church before the concert

These incredible concerts have the best bagpipers, drummers, violinist, bass, harpists, and brass players. Celtic interpretation of the holiday favorites such as “O Come, O Come Emmanuel”, “Joy to the World” and “Amazing Grace” all performed live on pipes, drums, harp, fiddle, organ and brass, accompanied by readings taken from Scottish, Irish, and Welsh literature was a night to remember.

Two world premiere compositions. The “Old Bard of Stilligarry,” composed by Eyler Coates of New Orleans, Louisiana, is a piece for Scottish harp and chamber instruments, and the work was composed for the Society through a songwriting competition sponsored by the Scottish Harp Society of America. The “John Muir Suite,” composed by Steve Gibb of Inverness, Scotland, pays tribute to the life of Scottish naturalist John Muir, and was commissioned in honor of the Centennial of the US National Parks. The later was so spiritual and spectacular, we videoed the whole piece and will have it for you Christmas Eve.

Proceeds from the concert support an extensive music scholarship program, which includes annual gifts to the National Piping Centre and the Royal Conservatoire of Scotland in Glasgow, the Gaelic College of Nova Scotia, and Lyon College in Batesville, Arkansas. Proceeds also support the Society’s sponsorship of the US National Scottish Harp Championship, the Gaelic Literature Competition at the Royal National Mod, and an annual academic research prize at Sabhal Mòr Ostaig, Scotland’s Gaelic college on the Isle of Skye.

The concert is made possible by generous gifts from the Gaelic College of Cape Breton, Nova Scotia, the Grand Summit Hotel in Summit, New Jersey, and Celtic Life Magazine.