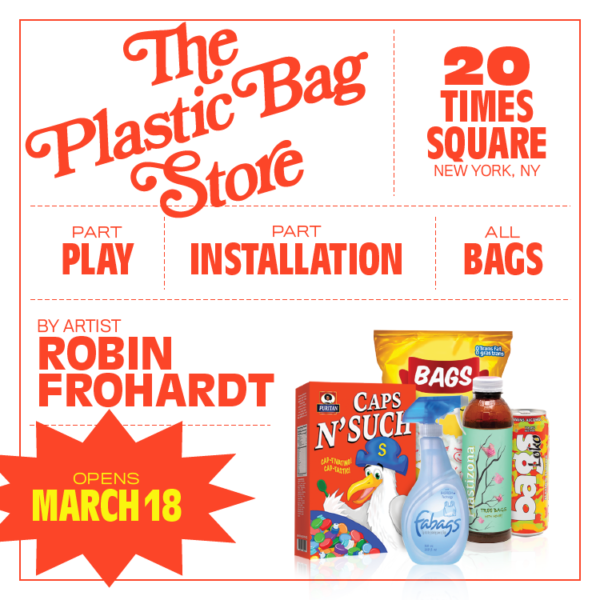 Times Square Arts is proud to present The Plastic Bag Store, Tuesday – Sunday, 11am-6pm. This is a public art installation and immersive theater piece by artist and director Robin Frohardt employing humor, craft, and a critical lens to our culture of consumption and convenience — specifically, the enduring effects of our single-use plastics.

Free and open to the public, The Plastic Bag Store will occupy 20 Times Square at 20 Times Square (W 47th St and 7th Ave), where shelves will be stocked with thousands of original, hand-sculpted items — produce and meat, dry goods and toiletries, cakes and sushi rolls —  all made from discarded, single-use plastics in an endless flux of packaging. At night, the store transforms into an immersive, dynamic set for free performances where hidden worlds and inventive puppetry tell the darkly comedic, sometimes tender story of how the overabundance of plastic waste we leave behind might be misinterpreted by future generations.

“The Plastic Bag Store is a visually rich, tactile, and humorous experience that hopefully encourages a different way of thinking about the foreverness of plastic, the permanence of the disposable, and that there is no ‘away’ when we throw something out. It is my attempt to make something authentic and human from that which is mass-produced. There is great humor to be found in the pitfalls of capitalism, and I find that humor and satire can be powerful tools for social criticism especially with issues that feel too sad and overwhelming to confront directly.”

Known for her bold aesthetic and highly detailed constructions, Frohardt is an award-winning artist, puppet designer, and director based in Brooklyn, NY. Skilled at taking a simple premise to an elaborate realization, her vibrant imagination, unique sense of humor, and meticulous technical craft come together to create work that defies the conventions of traditional storytelling.

The Plastic Bag Store is presented to coincide with the New York State plastic bag ban, which will go into effect March 1, 2020. A controversial issue at the heart of the single-use plastics debate, the conversation around plastic bags has activated elected officials, environmental groups, business owners, everyday consumers, and press alike on a local, national, and global scale.

“Robin has created the quintessential New York City public artwork — satire, smarts, local politics, global concerns, challenging Times Square’s love affair with consumerism and spectacle, and all within an beautiful project artwork quite literally made for and by New Yorkers, specifically from our trash.”
—Jean Cooney, Director, Times Square Arts

“Amidst society’s relentless cycles of consumption and destruction, this project drives us to create and re-create — rather than just destroy — so that hundreds of years from now we find that it is our cultural products which endure: our plays rather than our piles of plastics, our shows rather than our scraps, our imagination rather than our excess. Frohardt’s work is one of the most significant and ambitious Times Square Arts public projects to date, combining environmentally-conscious art, immersive installation, and live performance.”
—Tim Tompkins, President, Times Square Alliance

The Plastic Bag Store is created, written, designed, and directed by Robin Frohardt and produced by Pomegranate Arts, which is led by Executive Producer Linda Brumbach and Associate Producer Alisa Regas. It features original music by Freddi Price.

The Plastic Bag Store is commissioned by Times Square Arts with generous support provided by the Rockefeller Brothers Fund; The Andy Warhol Foundation for the Visual Arts; the New York State Council on the Arts with the support of Governor Andrew M. Cuomo and the New York State Legislature; and public funds from the New York City Department of Cultural Affairs in partnership with the City Council. Additional commissioning support has been provided by Carolina Performing Arts, University of North Carolina at Chapel Hill. The project was also developed with critical support from MANA Contemporary; The Made in NY Women’s Film, TV & Theatre Fund by the City of New York Mayor’s Office of Media and Entertainment in association with The New York Foundation for the Arts;  Olson Kundig; The Jim Henson Foundation; and is sponsored, in part, by the Greater New York Arts Development Fund of the New York City Department of Cultural Affairs, administered by Brooklyn Arts Council (BAC). The Plastic Bag Store is a project of Creative Capital. Produced by Robin Frohardt and Pomegranate Arts.

The Plastic Bag Store would not be possible without the generous support of Mark Siffin, CEO of Maefield Development and owner of 20 Times Square. For more than a decade, Siffin has delivered passionate support for the Times Square community and the Times Square Alliance, and has long been a champion of the performing and visual arts within the district and beyond.

Performances: Tuesday – Sunday, 7pm and 9 pm. Performances are free, but advance registration is required. Sign up to be notified when registration opens for The Plastic Bag Store performances.