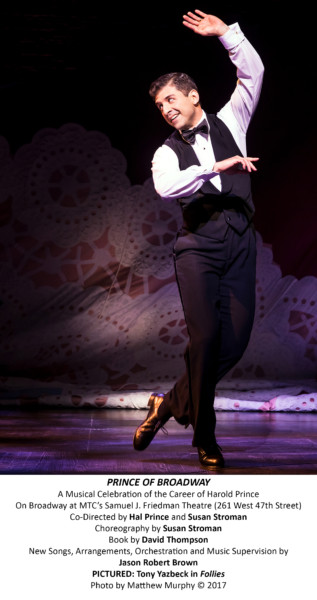 Since I can remember, Hal Prince was not only a prince but a king and a God. To me, he could do no wrong. I idolized the man and what he had accomplished in musical theatre. I was enamored and thought he was the epitome of Broadway. Sometimes, our idols have to fall off their pedestals. The Prince of Broadway, which opened two nights ago, doesn’t highlight the best of his career. The song choices are strange and the performances not always stellar. Who does come across as a star is Tony Yazbeck, who monopolizes the stage with his superb singing and excellent dance skills, but more on that later.

The show starts with Brandon Uranowitz stating “My name is Hal Prince, I’ve been directing on Broadway for seven decades.” Then the rest of the cast states one-liners of being Mr. Prince and you’re thinking why didn’t they just use a film of the real Hal Prince talking? The first song in the program is a muffled recording of Michael Xavier singing “Hey There” from Pajama Game.

The first live musical number is “Heart” from Damn Yankees. When it starts you think, oh I get it, Mr. Prince wants you to know it is heart that drives him. This is the first time Mr. Yazbeck stands out. Immediately he is Tony singing “Something’s Coming” into a romantic “Tonight” with Kaley Ann Voorheees to honor West Side Story. Suddenly, I am thinking, wait, why not “Steam Heat,” “What Ever Lola Wants,” “A Little Brains a Little Talent,”“These Were the Good Old Days,” “Dance at the Gym,” the quartet of “Tonight” or “A Boy Like That;” these are the numbers we want to see.

Uranowitz comes back with an adorable “Tonight at Eight,” followed by a vocally inconsistent “Will He Like Me” sung by Beyonaha Marie Parham.

Michael Xavier and Janet Ducal do a lively “You’ve Got Possibilities” from It’s a Bird… It’s a Plane…  It’s Superman. 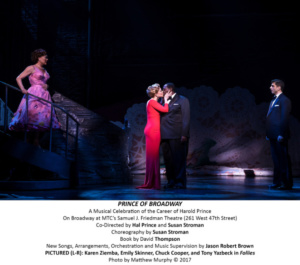 Beowulf Boritt’s set designs place you into that moment in time, as do William Ivey Long’s costumes, and there is that air of nostalgia as selections from Follies include “Beautiful Girls,” “Waiting for the Girls Upstairs” and “The Right Girl.” As much as I love “Waiting for the Girls Upstairs,” it really doesn’t work out of context. Again, why not “Lucy and Jessie” or “I’m Still Here”? But for me, this show is completely worth Tony Yazbeck’s brilliant rendition of “The Right Girl,” complete with musings of the original tap choreography by Michael Bennett. I saw Gene Nelson do this and still have that memory seared into my brain even though I was only 10. 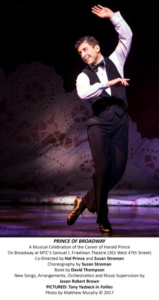 I saw A Little Night Music the same day I saw No No Nanette. Now 13, it was Sondheim’s score that won my heart. Here Michael Xavier and the elegant Emily Skinner brought to life “Night Waltz” and “You Must Meet My Wife.” Ms. Skinner sang the piece as a vocally endowed Glynis Johns, and now we see the brilliance of Hal Prince’s direction. 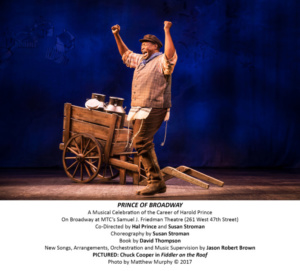 Chuck Cooper brought a jig to “If I Were A Rich Man” from Fiddler on the Roof…different. 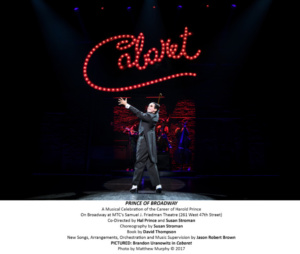 Then the piece that really put Hal Prince on the map, Cabaret, brought Uranowitz channeling Joel Grey with “Willkommen,” and “If You Could See Her.” A searing “So What” was embodied by Karen Ziemba. Ms. Parham redeemed herself stepping through that mylar curtain to belt out the title number. 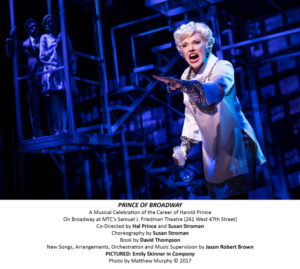 Act Two brought back Company, Evita, Showboat, Merrily We Roll Along, Parade, Kiss of the Spider Woman, Sweeney Todd and Phantom of The Opera. The overture to Company thrills, as Ms. Skinner electrified with the “The Ladies Who Lunch,” but Mr. Xavier pales in comparison to Aaron Tveit, now playing the role at Barrington Stage. 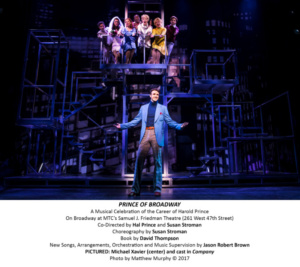 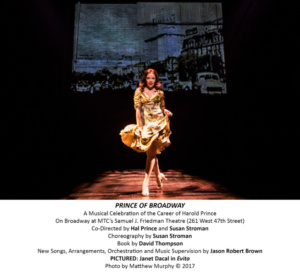 Janet Dacal sizzles in “Buenos Aires,” but is no Patti LuPone in “Don’t Cry for Me Argentina.”

A strange arrangement of “Now You Know” from Merrily had Ms. Skinner back.

Mr. Yazbeck gave a strong rendition of “This Is Not Over Yet” from Parade that melted into Uranowitz version of “Dressing Them Up” and Ms. Dacal on the theme from Kiss of the Spider Woman.

Sweeney Todd brought Ms. Ziemba and Mr. Cooper back with “The Worst Pies in London,” “My Friends,” and “The Ballad of Sweeney Todd,” – “By the Sea” or “Have a Little Priest” would have been more entertaining.

With The Phantom of the Opera still playing just down the street the theme song, “Wishing You Were Here Again” and “The Music of the Night” sung by Mr. Xavier and Ms. Voorheese just seemed redundant.

The show ended with a new composition by orchestrator Jason Robert Brown which was lackluster. Susan Stroman helped co-directed this piece. With such talent, one wonders why they didn’t choose better material considering what was available.

It may seem like I am being hard on Prince of Broadway, but I still recommend it. My guest, who is not a musical theatre aficionado, now wants to see these shows and in all honesty, so do I. As a matter of fact, Mr. Prince please come back with a new show. I still believe you are a Prince.

Suzanna BowlingJanuary 22, 2023
Read More
Scroll for more
Tap
What To Do, Where To Go In September
If Only: They Discovered Some Bigger Hills and Valleys