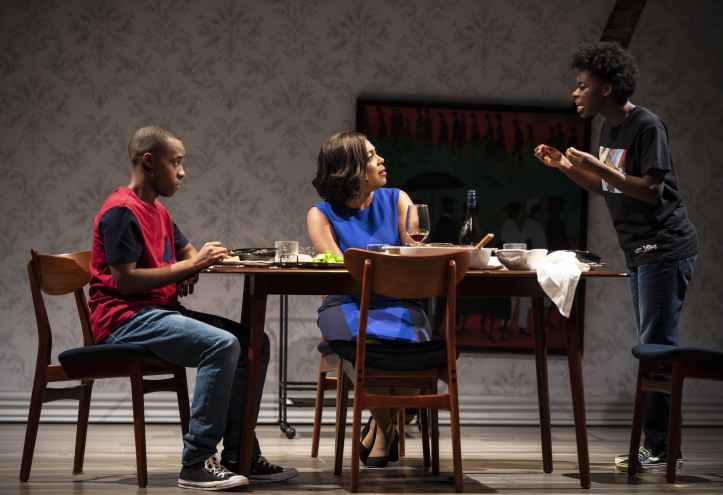 The Public Dares Us to Forget Eve’s Song

The Public Dares Us to Forget Eve’s Song

Seemingly “both nutritious and delicious“, The Public Theater presents Patricia Ione Lloyd’s new and dynamic exploration of what it means to be a black person living in the violence and danger of racist America. It’s not a surprising topic, especially for such a venue and time in history, but in many ways  Eve’s Song sings the conflict and troubling scenario with a strangely altered and comedic tone circulating around a difficult subject aiming its shots clearly on target. It’s not the only play on the boards that are exploring this real and disturbing place. Currently on Broadway, there is Christopher Demos-Brown’s American Son, a powerful new play that I saw pretty much one right after the other (that review will be posted soon), but as that construction focuses its eye on the frightening world of being a young black man driving around on the streets of Miami late at night, Lloyd wants to dive into the dark waters of violence against women of color, of all ages and in many different scenarios.  As directed with a subtle floating intensity and dark humor by the intuitive Jo Bonney (Public’s Mlima’s Tale), the young black man’s dangerous existence isn’t ignored or overlooked, but it clearly isn’t the main thing on Lloyd’s mind. As the disturbing spirits of black women (Vernice Miller, Rachel Watson-Jih, Tamara M. Williams) float across the stage, creeping out of nowhere and sending chills down our spine (the first one really got to me – sending me into that nervous place when I see horror movies), the ghostly visitations and spotlight monologues keep us from ever forgetting the message of the personal and deeply felt Eve’s Song regardless of how smartly funny the writing truly is.

After a messy divorce, the well put together professional mother, Deborah, played with efficiency and tense clarity by De’Adre Aziza (Public’s A Midsummer Night’s Dream), tries hard to keep up appearances even as the cracks are beginning to show. The politeness and civility that she demands from her two children are her defense and her armor.  “Excuse my reach” says her young teenage son, Mark, played with tight control by the very good Karl Green (Signature/DC’s Veni-Vidi-Vici).  He’s secretly obsessed with videos of young black men getting shot by the police, a frightening but clearly authentic scenario that quietly sits heavy and hard on our hearts. He watches them when his mother isn’t looking.  She thinks it’s probably porn and completely natural, but the darkness of the dead are all around the well-appointed home, shaking their comfort and rotating the walls around them. Her daughter, Lauren, played with purpose and a wonderful level of nervous optimism by Kadijah Raquel (Purchase Rep’s Blacktop Sky), has just come out as a lesbian to her seemingly supportive family. She is itching to connect to her community and to her sexuality in a true manner. She loves her family deeply, even when striving to become separate, but feels a strong desire to search for some other more internal and soulful experiences to discover.  The three sit at the table for dinner nightly, mirroring one another in behavior and attitude, asking polite questions of one another, and embracing a standard safe life. They think they are safe and secure, until the world intrudes and the floor boards rot and crack under the weight of the battle.

A disturbance comes in the form of Upendo, compellingly portrayed with strength and power by the formidable Ashley D. Kelley (PH’s Bella: An American Tall Tale). She’s the polar opposite to mother Deborah, dressing with bright colors and culture that emphasis her determination and passion, courtesy of the solid costuming by Emilio Sosa (Public’s Miss You Like Hell) . She’s the super hero lesbian that Lauren has been looking for, to kiss, goddess to goddess. For that, and for so many other reasons, Lauren is hooked. Tiffany, oh wait, I mean Upendo breathes life into Lauren’s search for identity and meaning, while also fortifying the young teenager’s unconscious rebellion that exists simultaneously beside her desire that Upendo will be included in the very family she is fighting against. And although Upendo doesn’t bring forth the dead with her arrival, the ghosts ramp up their desperate pleas for visibility.  Floating and collapsing with distinct and horrific physicality, telling their tortured tale through their poetic words of Lloyd and the dramatic movements of Stefanie Batten Bland (American Ballet Theatre Women’s Movement choreographer). The spirits have their say, purposefully and with deadly seriousness, relaying their forgotten song before it vanishes forever. Deborah tries to maintain civility and properness in a hopeless world of tragedy and violence but the dread seems to be closing in on her, watching and informing her of the possibilities of the future.

What is that song that they are singing? The spirits float by, telling their version of violence against the backdrop of videos projected on the dining room wall. It’s an ever-growing still life parade of death. One that at first is used by Deborah to hide the cracks in her construct of middle class safety, but the world won’t let that happen, no matter how much Deborah moves things around to pretend that all is ok. It blows that march of women up larger than life, taking over the space with floating depth and tight detail by set designer Riccardo Hernandez (Public’s Oedipus El Rey), with dramatic and intense lighting by Lap Chi Chu (Public’s Mother of the Maid), powerful projection design by Hana S. Kim (LA Opera’s Wonderful Town), and strong and precise sound design by Elisheba Ittoop (NYTW’s An Ordinary Muslim). These ghostly stories are the ones we don’t hear so much about; the black women who die at the hands of the police for just being who they are and born to be. The culture of our society is trying to make her forget their own song, the one that is nicknamed Eve. We feel the dread as we watch the seams of her civility coming apart around her, pushing forward a day of reckoning. They are coming for Deborah and her family, and it hangs heavy around her neck. The press release refers to this as a dark comedy, and at times it is funny and utterly engaging, but the darkness is in the air, seeping into our bones as we laugh at the witty dialogue and family dynamics.  It’s the darkness that is still trapped in our blood and our mind, a feeling that we can’t shake as we make our way down those Public stairs out into the dangerous world.  It’s provocative and intense, this feeling that has snuck in. Just make sure you push your chair in, or be prepared for Deborah’s spirit haunting you until your dying day.