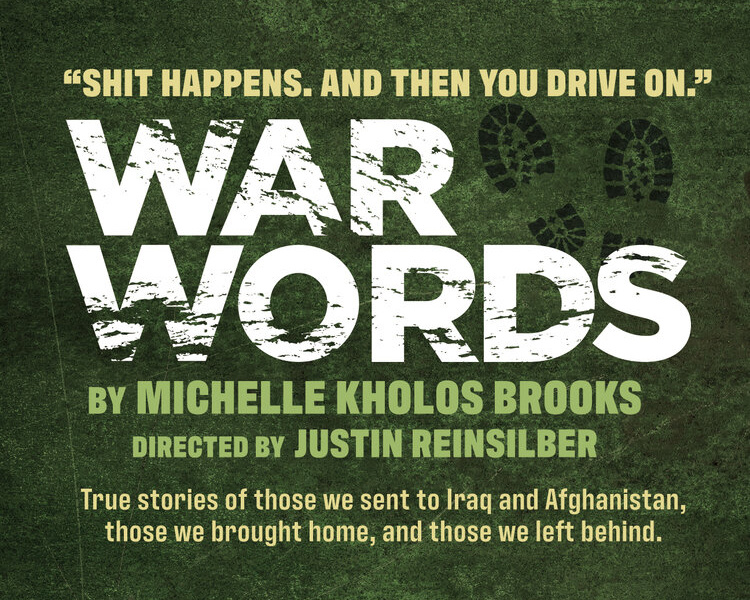 In New York on Tuesday, November 9th, 7:30 PM, on The Intrepid, Talk-Back to follow

In Los Angles on Thursday, November 11th, 7:30 PM, at the The Actors’ Gang Theater, Reception to follow

War Words, is a Pulitzer Prize nominated, docu-play in the words of the men and women who served in the U.S. Military during the Afghanistan and Iraq wars. We have always felt the need for civilians to better understand the motivation and sacrifice one makes to serve.

Few Americans enjoy close, personal relationships with service men and women and their families, and that fact risks veterans remaining at arms-length. This gap is no one’s fault or dereliction. It exists as a natural consequence of the fact that proportionally fewer and fewer Americans serve in the military, and those who do are mostly concentrated in small geographies across the country. Still, if Americans’ admiration and gratitude toward warriors is fulsome but bereft of real affinity, we suffer a kind of civic deficit which, among other adverse effect, can erode citizens’ engagement with the hard problems and big opportunities for which American leadership in the world is critically important.

That’s where the play,War Words, comes to bear. It is an inspiring and entertaining work that gets right after this “affinity gap” and serves the civic purpose for Veterans Day.

Suzanna BowlingMay 16, 2022
Read More
Scroll for more
Tap
National Alliance for Musical Theatre Announces Remaining Casting For The 33rd Annual Festival of New Musicals
Today Is 104th The Anniversary Of The Miracle of the Sun or The Miracle of Fátima