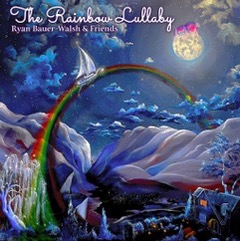 T2C’s Magda Katz talked to Ryan Bauer-Walsh about the album.

The creation of Queer cultural family music traditions is part of the constructive path forward to equality and representation. Ryan Bauer-Walsh conceived the project in memory of his mother, Nancy, as a way to continue her legacy of maternal strength, kindness and love.

“Music is one of the first things babies respond to, especially the human voice,” said composer Paul Losel. “Hearing a lullaby that corresponds to a baby’s LGBTQ fathers or mothers is something that was missing before this beautiful album and it will assist in creating the nurturing and loving bond between them.”

“‘Family’ is a loaded word for the queer community”, said compuser Lucas Tahiruzzaman, “and one that we’ve constantly redefined and reclaimed – from ballroom houses and nightlife communities to closely interdependent units of friends; therefore we have, perhaps, an even greater depth of experience from which to show not only our children- but all children- the meaning of ‘family’.”

Proceeds from The Rainbow Lullaby support the Ali Forney Center, whose mission is to protect LGBTQ+ youths from the harms of homelessness and empower them with the tools needed to live independently.

G. H. HARDINGJanuary 25, 2023
Read More
Scroll for more
Tap
Cabaret, Talks and Concerts For October
EGOT Legend Jonathan Tunick to be Honored by the Sharon Playhouse in Connecticut in Concert