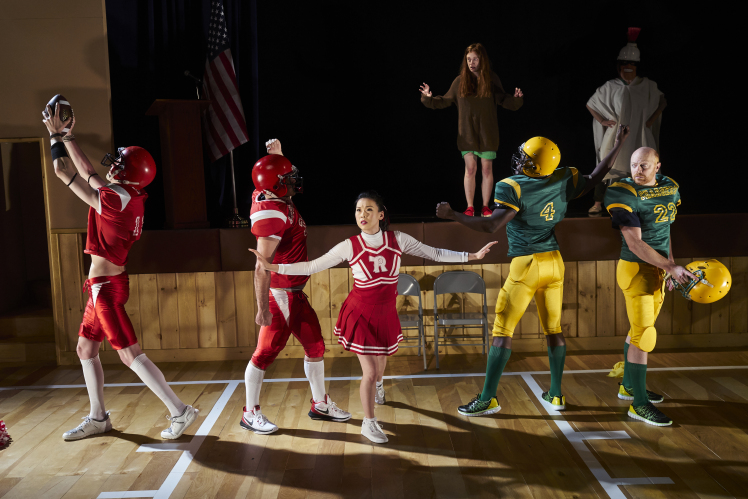 The Rape of the Sabine Woman by Grace B. Matthias: A Dark Comedy About R. A. P. E. Culture.

The Rape of the Sabine Woman by Grace B. Matthias: A Dark Comedy About R. A. P. E. Culture. 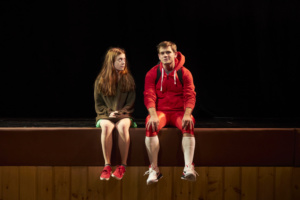 Leave it up to the wonderful Playwrights Realm to give us another sensational production that reminds us all what theatre is meant to be. They rocked our world with Sarah DeLappe’s Pulitzer-prize finalist play, The Wolves last fall (returning this fall to the Lincoln Center Theater), and I found myself eager to see what else they had in store for us. So it was no surprise that upon entering the Duke Theatre on 42nd St. that we would encounter something special. The staging by set designer Arnulfo Maldonado doesn’t look like anything one might envision from a play titled, The Rape of the Sabine Women by Grace B. Matthias. I’m not sure what I expected as I tried to limit all pre-show information, but the perfect setting that the design team created (lighting: Barbara Samuels; costumes: Asta Bennie Hostetter; sound: Mikaal Sulaiman) was unexpected. The title itself also gave us pause since the playwright is actually Michael Yates Crowley (NYTW and Ars Nova’s School Shooting IV), a brave soul who has written a wickedly dark comedy about the culture of rape in America. I have to say that tackling such a subject takes some guts, as comedy isn’t necessarily the first genre that jumps to mind, but after Crowley started following the Steubenville Ohio rape case in the media, he was inspired to try. And we are thankful he did. 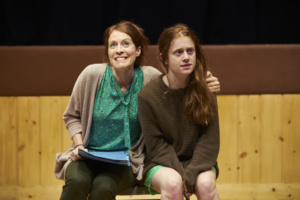 But who is this Grace B. Matthias who is given author credit within the title? I’d love to tell you all what the title refers to, as I’m thrilled and excited by what I just witnessed, but I’m not going to. I feel especially excited after a summer of productions that were underwhelming to say the least (not all mind you -I loved A Parallelogram, Hamlet at the Public, the PTP/NYC productions, and the Soulpepper season at Signature, but the majority were mediocre to full out terrible). I find myself jubilant that I can write a rave review as I’ve been itching to be blown away. But I also find myself perplexed as well. How will I talk about this brilliant production that won’t ruin any of the surprises and sap the adrenaline away from a first viewing? The more I tell you about what I just saw, the more a disservice it will be, so here goes. Wish me luck, as I attempt to tell you how powerful and hilarious The Rape of the Sabine Women, By Grace B. Matthias is, and not spoil any of the hundreds of shockingly relevant, emotional, and funny twists that are so expertly tossed in our direction. Fingers crossed.

The Intervention of the Sabine Women (1799).

It all starts with a young 15 year-old who has been raped. Her name is Grace, played with a wide-eyed brilliance by Susannah Perkins (The Wolves). She gives a standing ovation performance full of intelligence and bravery that is a must-see. In the aftermath of the incident, fellow school mate and football player Jeff, played by the very intriguing Doug Harris (Here’s We Are Animals) and fellow team member, Bobby, portrayed by the excellent Alex Breaux (NYTW’s Red Speedo) face indictment over the incident. Bobby has a few secrets of his own, and some demons to work out, as he lashes out at Grace with name-calling and abuse, but it’s Jeff with the more intricate game here.  His awkward affection towards Grace is blended perfectly with his inability to interact socially.  He’s a not-so-cool ride in the form of a much admired quarterback, a mythical god-like persona in American high schools. 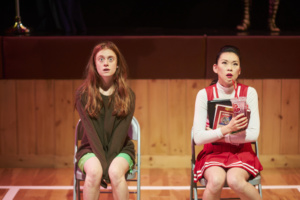 The high school is turned sideways by the accusation, and Grace finds that she must contend with a series of chaotic entanglements. One is with an over-zealous lawyer played by Jeff Biehl (Roundabout’s Machinal) who wants to focus attention on her victimhood. Also there is an over-whelmed high school guidance counselor, played by Eva Kaminsky (Broadway’s The Lyons) who has trouble with complicated emotions, Grace’s unseen absentee parents, and a community that would prefer the incident be forgotten so they may continue blindly supporting their favorite football team. Add to that a supportive but combative best friend, Monica, played impressively by Jeena Yi (CSC’s Comedy of Errors), a teacher, hilariously played by Andy Lucien (PH’s The Qualms) struggling to educate and stay out of trouble, and a News Anchorman, portrayed by Chas Carey (3LD’s Righteous Money) leading us through this mess. What we end up with is a wildly funny, fearless, and smart exploration of the culture of rape, trauma, performed by an excellent group of actors, seen through the similarities between Roman abductors and modern football culture.  It’s heady trip to take, especially as we find ourselves in an era when reporters covering the Steubenville, Ohio rape case talked more about the ‘promising futures’ of the boys accused, and not one word about the raped girl. 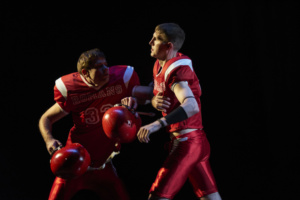 As directed by the excellent Tyne Rafaeli (Cherry Lane Theatre’s In a Word), The Rape of the Sabine Women, by Grace B. Matthias doesn’t miss one opportunity to explore and comment on the radical proposition that Crowley is making to the world.  The satire stays focused on the teenage survivor of sexual assault, while not villianizing the two males involved.  The play ignites a discussion framed around rape in a historical context of ancient Roman soldiers depicted in the famous painting, “The Intervention of the Sabine Women”, and widens it to equate football players’ status in high school as some sort of warrior-royalty feeding on aggression and confidence. Grace has been through a traumatic assault, and ushered through the process by her fractured psyche and personal point of view, we walk a fine line down the path of her non-linear recollection of the night in question. Rafaeli and Crowley use topical repetition (expertly) and an extraordinary sense of  imagination to effectively dismantle huge issues revolving around the assault.  We are schooled through satire on a variety of complicated issues, many of which are detailed more thoroughly in the program, all chronicling Rape Culture: explicit violence, removal of autonomy, degradation and normalization.

The topic is even more timely and disturbing as our President, the orange monster, tries to dismantle guidelines issued by the Obama administration in 2011 that require schools to investigate all complaints of sexual assault.  Education Secretary Betsy DeVos spoke about replacing the current enforcement system with one that will ensure fairness for the accused as she feels “they are getting the short end of the stick” (Washington Post, September 9, 2017).  It’s just that kind of thinking that this play is challenging, a concept that rape is a female problem, and that it is up to women to learn how not to get raped, and survivors alone to solve the problem.

This play manages magnificently to address so many of the emotionally complex issues about rape with both intelligence and humor, in a way that brought tears to my eyes, made my hands tremble, while also making me laugh out loud.  There is a fire burning down below, and to bring forth the idea of female firefighters, layered with sexist commentary, and a special appearance by none other than Hersililia (Yi), the Sabine woman who was kidnapped and forced to marry her abductor, is a courageous and wise choice to make.  It’s as brave as the lead actress, Perkins when she stands before us, risking judgement, criticism, and being negatively sexualized exposed and bare for us all to see.  As my companion said after the show, “She earned our respect and I could feel everyone showing her that respect in that moment”.  It’s a powerful feeling that image, and a daring, bold move on all that are involved in this tremendously important show.

So how’d I do? Did I ruin it for you? Did I tell you too much? Or did I make you want to go see it? Because,convincing you to go see The Rape of the Sabine Women, By Grace B. Matthias is my ultimate goal.

Suzanna BowlingJune 18, 2022
Read More
Scroll for more
Tap
Vanessa Williams Bares Her Soul at The Sheen Center
Makbet: Bring a Cushion, And Get Ready For Some Shakespearian Role Play.