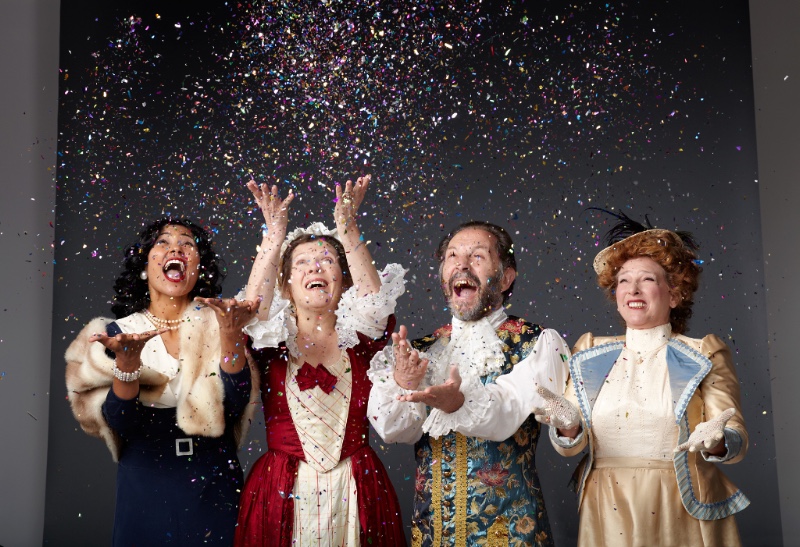 The Resident Acting Company, the new ensemble formed by members of the Pearl Theater Company announced today that they will present The Times Series, four script in hand performances that will explore various aspects of time, and the role it plays in literature and in our everyday lives.  The series will run monthly through July at The Players (16 Gramercy Park South) and commences with Noël Coward’s Blithe Spirit on April 8. 6PM cash bar. 7PM reading. For more information visit: www.racnyc.org

What is time? Is it an arrow that moves continually in one direction? Is it just an illusion that helps us organize our lives? Can we break free from our past and truly have free will? Do ghosts really exist, or are they a creation of our subconscious? With four Script In Hand Performances we will explore various aspects of time, and the role it plays in literature and in our everyday lives.

Two years ago, the Pearl Theatre Company closed its doors after 33 years of bringing New Yorkers the very best of the classical theater canon.  But the spirit and mission of the Pearl lives on in the Resident Acting Company, and they are just getting started.

The company’s mission is to continue and expand upon the great work they began at The Pearl.  In 2018 they produced seven staged readings at The Players, and have now announced four more for Spring – Summer of 2019.  This reading series has been wildly successful, allowing RAC to reconnect with these classic works in a contemporary context, to deepen its connection as a company, and most importantly, to reconnect with its beloved audience.

The Times Series lineup will also include The Cherry Orchard by Anton Chekhov on May 6, an evening of Shakespeare’s Sonnets on June 10, and a fourth work that is soon to be announced. All readings will have a cash bar that starts at 6PMand the readings themselves will start at 7PM.

Charles Condomine, a novelist, and his wife Ruth are hosting an unusual party. They have invited a local medium, Madame Arcati, to their house to perform a séance. Charles is doing research on the occult for his next book. He doesn’t believe in ghosts or expect the séance to actually work, but much to his surprise — it does. Madame Arcati manages to unleash the ghost of Charles’ ex-wife, Elvira, who has been dead for seven years. Written in six days during the Blitz, Noël Coward employs his astonishing wit in this very funny play that makes us look unsparingly at love and marriage.

Madame Lyubov Ranevskaya returns to her estate in Russia after a long absence, but she has brought her troubled past with her. In fact, all the characters in Chekhov’s masterpiece are haunted by their pasts, and it is making the present very difficult to deal with. They yearn for the past, as they do genuine human connection, and are unable to achieve either. They also can’t seem to confront the future. The estate is going to be sold and they can’t seem to wrap their minds around that. Chekhov’s wonderfully detailed characters hold a brutal mirror up to the human race, and they also make us laugh as we acknowledge how truly crazy we all are.

“No, Time, thou shalt not boast that I do change.” Shakespeare’s Sonnets have fascinated the world with their beauty and mystery ever since they were published in 1609. They contain such an overwhelming spectrum of human thought that it can sometimes be hard to examine them as a whole. We will perform them in one evening. We will explore the characters (The Dark Lady, The Fair Youth, The Rival Poet), the themes (Love, Lust, Beauty, and Time to name a few), and perhaps find some threads of story. The goal of this project is to breathe life into these poems and share them with an audience, so we can all understand them better, and see if they reveal to us their secrets.

The July reading will soon be announced.

The Pearl Theatre Company was founded in 1984 by Shepard Sobel. Performing classical repertory with a resident acting company, its troupe of actors trained together and performed show after show together, forming a common theatrical aesthetic and artistic bond. The Pearl began in a storefront in Chelsea and moved to Theatre 80 St. Marks, City Center and finally, to a new theater at 555 West 42nd Street. Operating for 33 years as an Off-Broadway troupe, it earned Drama League awards, a Drama Desk for “nurturing a stalwart company of actors…” and several Obies. When the company closed after 33 seasons in 2017, members of its acting company banded together to continue The Pearl’s artistic tradition of addressing the big classics with a resident ensemble.

Suzanna BowlingMay 16, 2022
Read More
Scroll for more
Tap
Do You Feel Anger? No I am More Disturbed at Where Humanity is Going
Webster’s White Devil Goes Up Against the Dagger of Brutus and Shakespeare’s Caesar