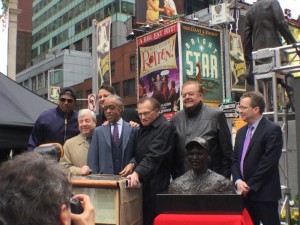 As the Reverend Al Sharpton was giving his speech at the unveiling of the long-lost Jackie Robinson “Color Barrier”-breaking contracts, when a heckler would not be silenced. With dignity and wit the Reverend Al Sharpton responded with kindness. The documents being shown have been described as “the founding documents of the modern Civil Rights era” and the Reverend cared more about the rights of not just blacks but gays, women and anyone who is being discriminated against.

In the middle Times Square colors were shown.