On Friday, January 28, The Ride, the award-winning sightseeing theatrical tour, will celebrate its 11th Iconic Year Premiere as Time Square’s and the Broadway Neighborhood’s most successful Experiential Entertainment and Immersive Initiative. 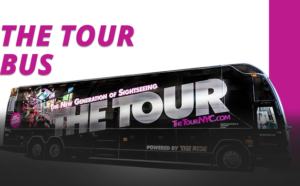 The shows are written and directed by CEO/CCO, Richard Humphrey, The Ride and The Tour are the only discriminating choice in a crowded field of the ordinary.

The Ride and The Tour have absorbed and embraced the result of that $15 Trillion Dollar investment as their stage and the object of their affection.

The Ride is the world’s only traveling virtual reality theater; scripted, scored, immersive, experiential, and spectacularly supported by multimedia and surround-sound.

The Tour powered by The Ride has single-handedly ushered in a new generation of sightseeing.