Richard Humphrey conceptualized what the future of tour-bus entertainment could be when he created The Ride. On Thursday, August 30th CEO/CCO author and director, of the award winning bus The Ride, Richard Humphrey will be on hand to greet The Ride’s 800,000th rider at the 42nd Street boarding location. 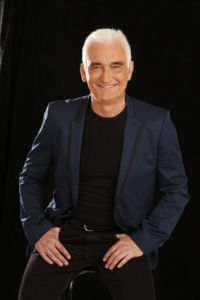 The Ride moved into the Broadway neighborhood on October 15, 2010 and changed everything about the live entertainment experience and has been seducing and stunning tourists and native New Yorkers  ever since. Next came Mr. Humphrey’s The Ride Holiday Edition now preparing for its 7th iconic season. Re-launched April 15, 2014 and drenched in acclaim and awards, Mr. Humphrey’s cutting-edge experiential entertainment was the game-changer for tour and family of products.

His Ride In Masquerade launched its 5th Autumn Season on Monday, October 2, 2017 after which it sold out; almost instantaneously.

The Downtown Experience powered by The Ride is a multi-media historical adventure, with a storyteller’s on-board narrating highlights by the magic of six Virtual Reality Visualizations (enhanced with the magic of the TimeLooper virtual reality app) and including on-location time-travel back to the inauguration of George Washington in 1789.

The Tour powered by The Ride, also launched four season’s ago, has financially out-performed all of Mr. Humphrey’s expectations as well his Board of Director’s wildest dreams.

Now expanded to several casts and over 150 employees as Humphrey’s prepares for a London Ride, a Texas Ride and a Tokyo Ride, while continuing to scout Paris, Boston, Dublin, San Francisco, Hong Kong, and Dubai.

These are the greatest shows on wheels. 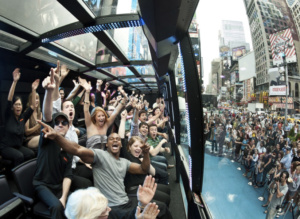 Just awarded its Sixth TripAdvisor® Certificate of Excellence Award and the RTO Summit’s Coolest New Product, The Ride has also been inducted into The TripAdvisor® Hall of Fame; an accolade reserved for less than 1% of the worldwide Travel-Related Corporations reviewed by TripAdvisor’s® 60 million members and 140 million visitors.  Also honored with a nomination for Broadway’s coveted Drama Desk Award in the prestigious Unique Theatrical Experience Category and named the Third Most Successful Youth-Primed Attraction in New York City by Fodor’s Travel, The Ride has most recently been nominated for The Concierge Choice Award in the Best Tourist Attraction category. The Ride has also been declared one of the Top 8 Must-Attend Wild & Wonderful Spectacles in New York City by NewYork.com who also named The Ride’s Gold Star Tour Guide, Rory Lipede, as the Most Entertaining Tour Guide in New York. The New York City phenomenon began this year by winning The Culture Trip’s Favorite Award as the Must-Take NYC Tour and being named “the most exciting entertainment experience to ever hit New York City” by Viator. All of this homage and accompanying critical acclaim has led to The Ride becoming the singularly most requested ticket at Travel Agents’ offices all over the country.
For tickets The Ride / The Tour / The Downtown Experience
1-212-221-0853