The Ride Is Back In Masquerade Just in Time For Halloween 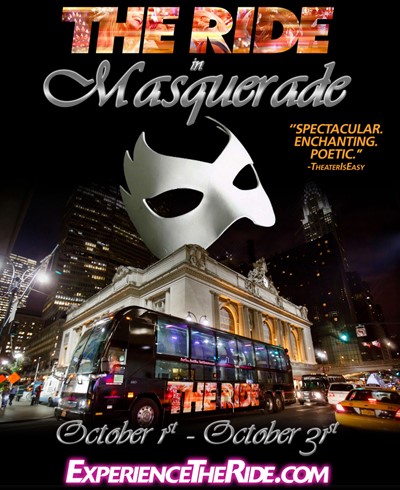 The Ride Is Back In Masquerade Just in Time For Halloween

Approaching its 27,000 performance, the spectacular, immersive, interactive, experiential phenomenon, The Ride will be in bewitching masquerade for this Halloween Season.

Written and directed by creative magician Richard Humphrey, CEO/CCO, The Ride’s award-winning script will take a bewitching seasonal turn as performers hide behind their lace and bejeweled masks to celebrate all that we love about October in New York.

The award-winning cast of The Ride will don especially designed lace and jeweled masques of medieval court life to enchant and captivate their audiences on the million-dollar motor coaches and trillion-dollar Manhattan streets.

What began as an elaborate and choreographed night of seduction in the gold-drenched royal courts of 15th Century Europe and steadily moved to the torch-lit public costumed balls of the 16th Century will now be introduced to the 21st Century’s center of the Universe – the streets of Mid-Town Manhattan.

The Ride In Masquerade will continue to spellbind for the entire Halloween Season through Thursday, October 31.

For centuries, the masque balls of Europe were considered a special luxury of entertainment.

Their enchantment was irresistible; as is the unique experience of The Ride

For tickets go to ExperienceTheRide.com