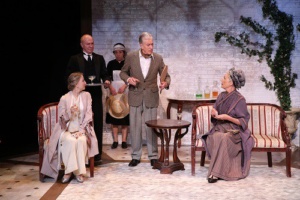 British playwright J. B. Priestley’s The Roundabout is a delightful romp into the past. Written in 1931 for Peggy Ashcroft, the show was presented in 1932 for a brief moment in Liverpool, but it wasn’t until 2016 that the show made it to London. The Cahoots production is the American premiere at 59E59 Theatre. This light drawing-room comedy is set at the country estate of Lord Kettlewell (Brian Protheroe), who has several business dealings going sour. He is on the verge of bankruptcy. Visiting the estate for the weekend is his old chum, Churton “Chuffy” Saunders (Hugh Sachs). Suddenly his  daughter, Pamela (Emily Laing), shows up, who he has not seen for about 10 years. In tow is a Comrade Staggles (Steven Blakeley) who is naive to the ways of the rich. They have both been in Soviet Russia and have converted to Communism, much to her father’s dismay. Pamela, challenges her father which he finds delightful, especially when she gets rid of his soon to be ex-lover Hilda Lancicourt (Carol Starks), who has marriage in mind and brings back her mother Rose (Lisa Bowerman), whom he still loves. 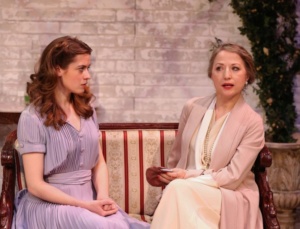 In the meantime Staggles presumes the maid Alice (Annie Jackson) wants his blatant affection, because he sees her as an equal. 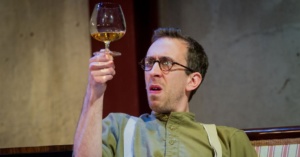 Also in the mix is Lady Knightsbridge (Richenda Carey), a dowager in search of a loan and his personal secretary Gurney (Charlie Field) who it turns out is the man who broke Pamala’s heart.

Just when you thought you have all of the characters straight the butler (Derek Hutchinson) may have just won the sweepstakes.

Priestley is best known for An Inspector Calls, and is witty writer, making social commentaries that are just as relevant today. Under Hugh Ross’s direction, the play moves at a clip and is crisp and refreshing.

Mr. Sachs, is delightful as “Chuffy”bringing in comedic chops. Mr. Blakely, is that annoying character you love to watch. Mr. Kettlewell, bring sophistication and that aristocracy air to the forefront. Ms Laing has that “it” factor that makes her completely watchable.

Plays written in other era’s are turning out to be morality plays that show us how little we have learned. With The Roundabout, at least it is served in up in a palatable, witty way.

The Roundabout: The Cahoots Theatre Company production, in association with the Other Cheek and Park Theatre at 59E59 Theatre, through May 28 as part of the Brits Off Broadway festival.