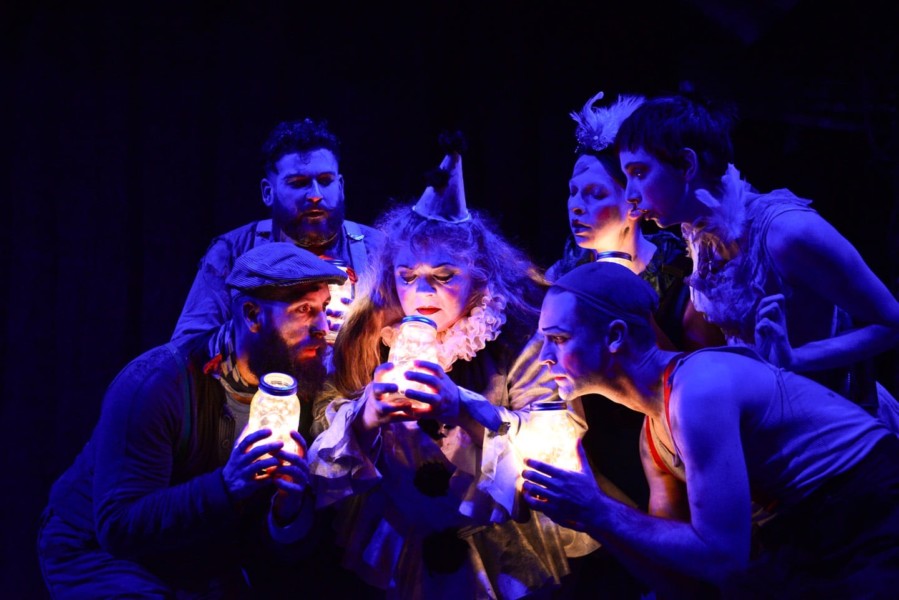 For those with a taste that leans toward the macabre, Porchlight Theater is proud to present the return of The Ruffians’ Burning Bluebeard, a heart-breaking vaudevillian musical. Now in its eighth annual iteration, writer Jay Torrence’s retelling of the real-life 1903 Chicago Iroquois Theatre Fire that left 600 dead may not sound like typical Christmastime sentimental nostalgia. Director Halena Kays kept the frenzied pace moving, providing her talented cast lots of rapid-fire laughs before the heavier portions of the story anchor the frivolity. Keeping the Ruffians time-honored tradition to “make beautiful things with rough edges” Burning Bluebeard is lovingly staged, albeit for a very short, 12 production run.

As for the additional creative team, Maggie Fullilove-Nugent’s unnerving and surprisingly touching lighting added powerful punctuation to the proceedings. Jeffrey D. Kmiec’s understated scenic design allowed for full range of motion by the performers so as not to inhibit this most animated of casts. Bill Morey’s distressed and tattered costume coordination was both ominously delicate and powerfully strong enough to withstand the constant exaggerated movement and whirring athletic acrobatics of the troupe. The singed edges and burned marks, an ominous reminder of things soon to come. Even though the real-world story ended in tragedy, thankfully that all happened, for the most part, offstage, accented by Mike Tutaj’s triggering sound design.

While this was originally a Christmastime tragedy for 600 turn of the century, 1903 theatergoers, The Ruffians’ Burning Bluebeard 100-minute, one act, bewildering parable really is an outstanding delight. A great, but distinctively grown-up, night out, packed with rapid fire humor, elegant movement and a pulsating soundtrack. The elements of triumph and tragedy will effectively pull at your heartstrings. These are the moments when Burning Bluebeardtruly smolders. Enjoy it while you can during its fleeting, two week 2019 run.

The Ruffians’ Burning Bluebeard is currently playing at Porchlight Theatre at the Ruth Page Center for the Arts through December 27, 2019

RossSeptember 17, 2022
Read More
Scroll for more
Tap
The Land of Forgotten Toys The Musical – Let’s Hear It For The Girls
The Best of 2019 Theatre