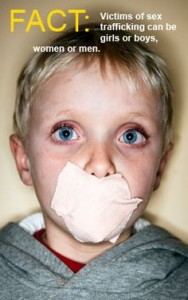 More common than you think. Why aren’t we taking to the streets for this?

The Salvation Army is deeply committed to the modern-day fight against human trafficking and any form of sexual exploitation innately linked to sexual trafficking.

The Salvation Army was founded in London, England, in 1865 by the husband and wife team of Catherine and William Booth. The Booths went against Victorian conventions and took their ministry to the dirty and dangerous streets of London’s east side where they reached out to the destitute and desperate. Their efforts eventually evolved into a battle to protect women and children from the horrors of sex trafficking. Upon learning of the desperate needs of women and children at risk of or already caught up in organized commercial sexual exploitation, The Salvation Army responded by opening homes for women and girls and developing intensive “Rescue Work.” Within thirty years Salvation Army rescue homes grew from one to 117.

The Salvation Army’s efforts to help women and girls in prostitution did not stop there. In one of the most fascinating chapters of its history, The Salvation Army participated in the planning and execution of an undercover investigation into the trafficking of young girls for prostitution – a detailed account of which was published in July 1885 by the Pall Mall Gazette in a series of articles called, “The Maiden Tribute of Modern Babylon.” The series created enough fervor to foment public opinion in support of the Criminal Law Amendment Act, a measure which when passed in August 1885 raised the age of consent from 13 to 16 (although reformers sought 18). The Salvation Army’s advocacy efforts were a major catalyst in the bill’s passage. Now, more than a century later, The Salvation Army in the United States and abroad is part of a reviving movement for the abolition of sex trafficking and other forms of commercial sexual exploitation.

For additional information on this topic, visit the Initiative Against Sexual Trafficking website at IAST.net.

Suzanna BowlingAugust 12, 2022
Read More
Scroll for more
Tap
Ring Them Bells For The Salvation Army
Merry Christmas and Happy Holidays From The Staff at T2C