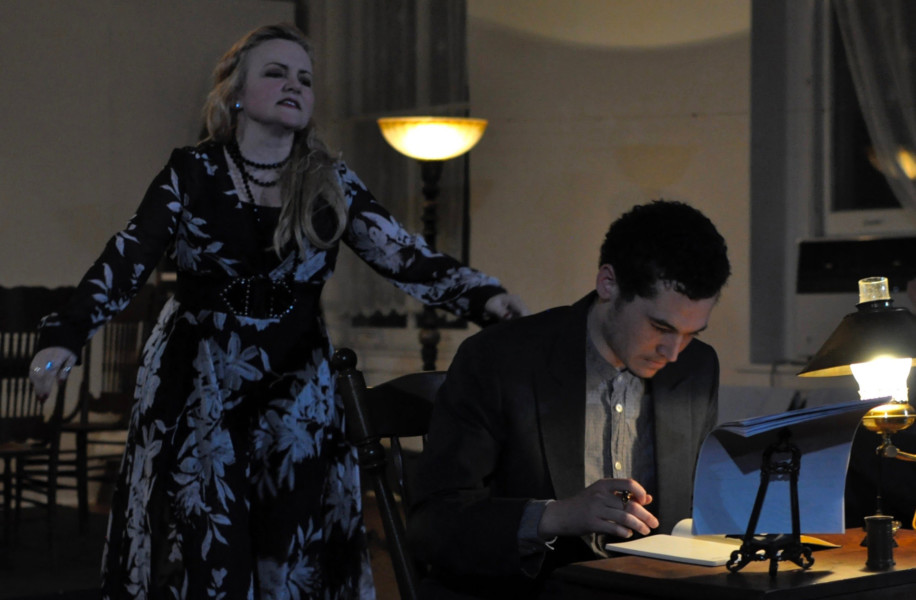 The Seagull: Almost There

The Seagull: Almost There

The Instigators hit the mark in some aspects of this charming production of The Seagull, but there are some inconsistencies in the interpretation of subtext and the direction of the piece.

This Chekhov classic depicts a family of writers and actors as they spend time in the country side home that belongs to Sorin (Roger Rathburn). The action reveals their ideals about art forms, and it illuminates the love triangles that keep all characters longing for a person they can’t have or doesn’t want them. The play opens with a gothic and moody Masha (Siena D’Addario) and an over eager Medvedenko (Emmanuel Elpenord). Within moments they establish the dark and comic lilt that reveals each struggling artist as the play moves forward: the robust, bored and jaded Arkadina (Kristen Vaughan), her son, a depressed and gifted writer Konstantin (Taylor Petracek), her lover, a famous writer Trigorin (Fergus Scully), the naïve ingénue, Nina (Jeanette Dilone). These artists are surrounded by others who support and inspire them: the handsome and logical doctor, Dorn (Todd Licea), Masha’s parents, Paulina (Deborah Unger) and Shamrayev (Peter Feliz) and the manservant Yakov (Kazuhiro Imafuku). 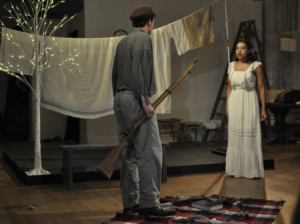 The charming set by Chika Shimizu earnestly reflects the simply elegant and quaint countryside house that sits by a lake. The gallery lighting adapted to stage lighting by Caitlin Smith Rapoport adds warmth that only exists in a few moments and characters of the play. The original music by Sylvana Joyce is a flowing somber underscore that matches the self-loathing spirit of Chekhov’s characters as well as the costumes do. Lisa Renee Jordan’s costumes bring out minute details of each character making this production feel full and round. 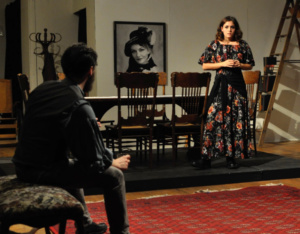 The flaws in the production appear to be directorial. While Lillian Meredith has used the full space to her advantage, Chekhov’s subtext is heavily misinterpreted. This is most evident in the final scene between Nina and Konstantin. The majority of the actors fluctuate between natural and over the top. Often there is too much shouting and movements escalate the scene before the text. The second half of the show is much more natural and appealing than the first. The most consistent and most believable performances come from Fergus Scully, Kristen Vaughan, Todd Licea, Siena D’Addario, and Deborah Unger.

Despite its flaws, this production is an engaging adaptation of Chekhov’s famous play. The themes and overall sensation of the play are just right.