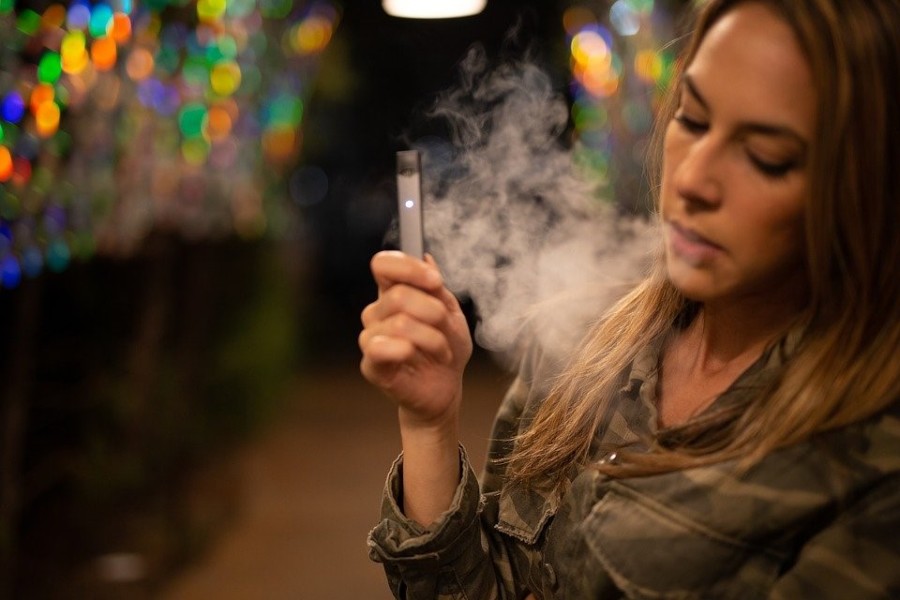 Vaping is older than you think. Far older. Today, it’s rapidly becoming one of the most popular ways to consume dry herb, and you’d be forgiven for thinking that it’s a new innovation. After all, just look at the market; every single device from the DaVinci IQ to the Mighty, look like sleek and modern pieces of technology. Even the venerable Storz & Bickel Volcano, the grandfather of modern vapes, looks like something from a sci-fi movie set.

However, despite all these modern bells and whistles, the technology and engineering principles that dry herb vaporizers are built around are established and well known. The two main types of heating, conduction and convection are age old. Conduction directly heats by putting it in contact with the heating element, a method used in stove for a long time. Convection on the other hand heats the air around the herb, which is identical to the principles of how an oven works.

On top of this, the other main method of consuming herb is far more ‘primal’, combustion and bubbling water pipes feel old. On top of that, for decades they were seen in pop culture as icons of the cannabis world. Naturally, people became accustomed to them, and any deviation seems novel by comparison.

However, vaping, in one form or another, has been around for centuries. In fact, it’s nearly as old as combustion. Let’s take a look at the secret history of vapes.

Some of the earliest examples of vaping dry herb can be traced all the way back to Egypt in 5BC. The Ancient Greek historian, Herodotus wrote about vaping in his book, The History of Herodotus. Here he records how the Scythians, an ancient nomadic tribe, consumed herb. They would take hemp seeds and place them on red-hot stones. This would cause the seeds to boil and vaporise, emitting a vapour that could be inhaled.

This method works on the exact same principles as modern vapes like the PAX 3. This method is called convection, and it works by putting the herb in contact with a heated surface. Obviously, the PAX is a far smaller and more efficient example of this technique, but the principles are essentially identical!

Around 150 years ago, a man known as Irfan Sheikh was on a one-man crusade to revolutionize herb consumption. He lived under the Safavid Dynasty and is credited with inventing the hookah water pipe. Contrary to popular belief, hookahs don’t directly burn herb, instead, they use red-hot lumps of charcoal to heat the air around the herb, gradually baking the vapour out.

Again, this idea is still around today. Convection vaporizers indirectly heat herb by heating up the air that flows across it. The Mighty portable vape from Storz & Bickel is, in many ways, the modern heir to the hookah. If you’re a historical purist and want to enjoy a hookah-style vape experience in a more authentic way, then the Plenty from Storz & Bickeland it’s articulated whip is a suitable throwback.

As we approach modernity, the history of vaporizers becomes more muddled. It was a time of unprecedented technological innovation for the world. The world of vaporizers wasn’t spared from this. In 1927 Joseph Robinson invented a mechanical butane ignition vaporizer. He was quoted as saying, “My invention relates to vaporising devices for holding medicinal compounds which are electrically heated to produce vapours for inhalation.”

He patented his invention in 1930, but it never made it to market.

While butane has fallen out of favour as a method of heating dry herb, it isn’t completely gone. The Dynavap M uses an external butane torch to heat herb placed in a conductive alloy cap.

A veteran of the Korean war, Herbert A Gilbert, was the next figure to evolve dry herb vaping. He actually pioneered battery-powered vaporizers. He is quoted as saying later in his life, “Using the technology available in 1963, I concluded that a battery-powered heat source would do the job, and the first electric cigarette was born. I did build prototypes and tried using various flavours of water as steam… and it worked.”

While the idea of a battery-powered vaporizer is fairly mundane today, at the time it was revolutionary. The concepts in his device can be found in a huge number of modern vapes, from the DaVinci IQ to the Arizer Air II.

In 1989, Dr Lunglife wrote a manuscript that elaborated on how he had used components from Radioshack, to create a home-made vaporizer. His invention was vastly different from anything seen today. It involved brushing concentrate extracted from cannabis onto a lightbulb thread, which served as the heating element. He asserted that it was better than smoking, despite the lack of existing evidence to confirm this. Of course, time has proven his claims to be accurate and today, thousands of people choose vaporizers as a healthy way to consume dry herb.

In 1993, Eagle Bill, a cannabis pioneer, created the first modern vaporizer. Known as the Shave and Vape, it is similar to the Dynavap M in that it requires an external heat source to work. It rose to popularity in Amsterdam during the 7th Cannabis Cup. The modern vape industry can be traced back to this point in time.

Three years later, Storz & Bickel established the modern vape industry as we know it. They became the first factory in Germany to specialize in dry herb vaporizers. This lead to the landmark development of the Volcano desktop vaporizer. The Volcano was the result of four years of extensive research and patented designs. When it hit the market in 2000 it was the closest to perfect a vaporizer could be, even today it is considered one of the very best vaporizers out there. It also pioneered the detachable balloon valve that revolutionised how people could vape and set a new standard for the market. The iconic chrome cone of the Volcano remains one of the most instantly recognisable products on the vape market.

The company only grew from there, and in 2003 they decided it was time to take on the American market. This proved to be a quick success and justified the opening of a branch of operation in California.

In 2003, the company entered a new phase: targeting American markets. They executed this through the release of the 110V Volcano, and by 2005 they had built up a strong enough presence in the United States to justify opening a branch of operations in Oakland, California.

From that day on, Storz & Bickel have gone from strength to strength, diversifying out into the hand-held vaporizer market with the Plenty, and dominating the portable vape industry with the Mighty and Crafty.

The secret to Storz & Bickel’s success lies in how they learned a little something from every era of vaporizer history. They combine the classic heating systems of conduction and convection in their hybrid heating system. This system provides the best of both worlds and is known to provide the purest, and tastiest vapour out there.

Today the vaporizer market is a multi-billion dollar industry. While they were once low-tech and low-cost devices, they have started to diversify into something else. Vape manufacturers decided to adopt the design conventions of consumer electronic companies like Apple and Sony. They are now offering sleek, slickly-designed, and advanced vaporizers that offer their users more features than ever.

This tactic is clearly working, estimates for the value of the vaporizer industry range from $2.5 billion to over $10 billion. These Silicon Valley-style profits are naturally matched by a Silicon Valley location. With leading brands like Firefly and Pax operating out of California. Companies from across the market are reporting exponential growth year on year. This growth is happening in parallel to the growing acceptance and normalization of cannabis. Some believe that the more market-friendly appearance and aesthetics surrounding dry herb vaporizers are major contributors to this phenomenon.

Modern vaporizers feature all manner of features that weren’t possible even a decade ago. Devices like the Mighty and Crafty now come with bespoke phone apps that allow users to have unprecedented levels of control over their vape experience. They can adjust temperatures with accuracy, check battery life, and cycle through a huge amount of different modes and settings.

Cannabis now has dozens of sanctioned medicinal uses, and vaporizers are one of the go-to ways to deliver it. Vaping has a range of advantages over combustion for patients. It allows users to enjoy the active ingredients of their herb without having to inflict harsh smoke or dangerous carcinogens on themselves. Many companies, such as Storz & Bickel and DaVinci have gone as far to partner with medical professionals so they can deliver vaporizers that are built from the ground up for medicinal use.

The Future of Vaporizers

Vaporizers have a long and storied history that is defined by one thing more than anything else: constant innovation that builds on what came before. As vaping becomes more commonplace, and potentially the most popular form of dry herb consumption, we are sure to see some new and fantastic innovations.

It’s nearly impossible to predict exactly what will change, but we can speculate. Modern trends in vape design seem to be emphasising devices that are compact, so we can expect to see vape design become increasingly miniaturised. This will build on advanced, rechargeable batteries and intuitive control systems.

Another trend many have noticed in vape designs is increasing emphasis on vaporizers that employ dual-use heating systems that are compatible with both dry herb and concentrates. In fact, many are predicting that concentrates may become the main focus of the vaporizer industry.

Refinements in extraction techniques mean that more and more of the herb’s active ingredients are surviving the concentration process. This means that concentrate users can increasingly enjoy whole plant experiences, that are much closer to the authentic dry herb experience, just in a more compact and potent form.

Some are even going as far as to claim that the vape industry will move away from the current chamber system, and adopt a more Juul-like cartridge system that will allow users to enjoy pre-mixed and flavoured blends that can be replaced or swapped out on the fly. Streamlining the vape experience massively.

As the industry continues to experiment and grow, we will see new innovations in vaporizer technology, and the materials that they will use. As time goes on, and as legalisation continues in Canada, the US, and eventually the European Union, we can expect to see vaporizers reach the ubiquity that electronic cigarettes enjoy.  Whatever happens in the long term, we can be sure that dry herb vaporizers will keep building on their long history.

The Technology Behind Online Casinos
Virtual Reality escape room bay area is worth trying- why?