The Secret Life of Bees is Buzzing 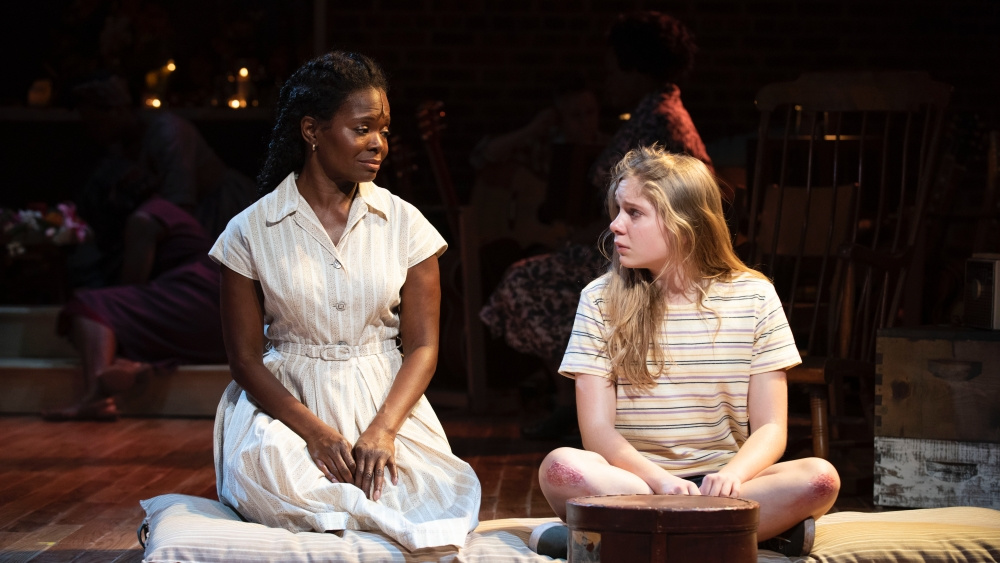 The Secret Life of Bees is Buzzing

I have been following The Secret Life of Bees since it played at Vassar at The Powerhouse. Based on Sue Monk Kidd’s best-selling novel set in South Carolina during the Civil Rights struggle, the musical has an impressive team behind it. Adapted by two-time Pulitzer winner Lynn Nottage, composed by Duncan Sheik, lyrics by Susan Birkenhead and directed by Sam Gold this show is emotional and thrilling.

This musical blends impressive female talent, spirituality and a politically charged script that is intelligent and heartfelt. The first-rate ensemble, is dominated by women of color and included LaChanze, Eisa Davis and Saycon Sengbloh whose voices transcend and keep this music soaring.

There was a 2008 screen adaptation, but I missed that so I saw this piece with a fresh take. Set in 1964 South Carolina, President Lyndon B. Johnson has signed the Civil Rights Bill into law, though white racists are reluctant to let go of thier old ways. In The Secret Life of Bees, we follow 14-year-old Lily Owens (Elizabeth Teeter), who blames herself for the death of her mother. Her abusive and bitterly angry father, T-Ray (Manoel Felciano), a peach farmer, shows no affection for the girl. He often punishes her by forcing her to kneel for hours in salt as her knees bleed and never heal. Lily’s only friend is their African-American housekeeper Rosaleen (Sengbloh), who longs to vote. When the town’s rednecks beat her up and charge her with criminal misjustice, Lily breaks her out of the hospital and they go on the run.

The two travel to a town called Tiburon, S.C. because of a honey jar label with a Black Madonna, as Lily searches for clues about her mother. In Tiburon, August Boatwright (LaChanze), an expert beekeeper, lives with her sisters June (Davis) and May (Anastacia McCleskey). May is damaged by the death of her twin sister, April. June is a history teacher, who keeps turning down the marriage proposals of a local school principal Neil (Nathaniel Stampley). When August takes in Lily, June is furious and believes she will bring harm to the family.

The Boatwright sisters, are known as the Daughters of Mary, who gather to pray to the life-size Black Madonna statue in the front parlor and the image on the honey label. August helps Lily overcome her fear of bees stating “Every living creature responds to love.” As Lily heals, friendship and love threaten her and Zachary (Brett Gray), the black teenager who works in August’s bee house to help pay his way through college. In the end love does heal, strength stands up for what is right and families are born out of the most unlikely circumstances. Times change, but we are still far from true healing.

This cast is truly wonderful especially LaChanze, as the knowing and loving August. Brett Gray takes a star turn, as he sings and tears up the stage. His chemistry with Elizabeth Teeter, whose Lily seemed appropriately nervous and ripe for change.

The music stylings are based on gospel, bluegrass, pop, jazz, blues, soul and are infectious. Standing out are “Hold This House Together,” “Fifty-Five Fairlaine’ and “All You Need To Know”. With nine outstanding musicians arranged around the playing space, as well as June on cello, T-Ray on fiddle and the voices of this cast spectacular, this music is heaven sent.

Gold direction keeps the emotional pulse and I love the bees on wires that make us feel the heart and soul of this piece.

Mimi Lien’s set is simple yet effective. Jane Cox’s lighting is enhanced by the glow of candles placed around the stage and auditorium, and beehive smokers keep an air of mystery.

As the Black Madonna, a carved statue looking like a masthead offers hope, so too does The Secret Life of Bees. I expect to see it on Broadway and making a honey of a season.