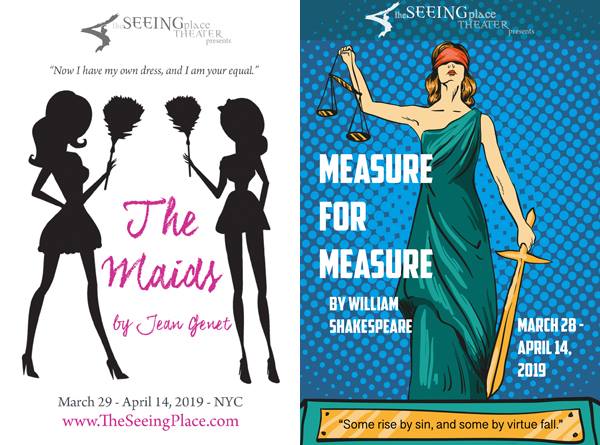 The Seeing Place Theater Makes a Point about Power

The Seeing Place Theater Makes a Point about Power

The Seeing Place Theater is quickly becoming one of my favorite off-Broadway companies. They always select excellent plays that reflect elements of the world in which we live. In The Maids and Measure for Measure, Brandon Walker and Erin Cronican have chosen stories about women living in societies that do not grant them the power of choosing their own destiny or the credibility their voice deserves.

The play opens with the maids in the midst of their role play, and it takes a moment to catch on with their game. There a few things that make it difficult to catch onto the absurd tone of the piece. The first is that the pacing is a bit slow in challenging places. Christine Redhead heightens the energy of the scene and visibly generates a reaction from Erin Cronican and Gaia Visnar. After her exit, Ms. Cronican and Ms. Visnar explode into a world where they are the best of scene partners. They turn the tables on each other with ease and the love/hate that is unique to a pair of sisters.

This delightful absurd French play by Jean Genet centers on two maids who engage in the ceremony of roleplaying the murder of their employer. Claire (Gaia Visnar) and Solange (Erin Cronican) are sisters and maids for Madame (Christine Redhead). They dislike their employment and loathe their employer, who both dotes on them and insults them in the same breath. Written in an era that glorifies criminals, Claire and Solange revel in their sadomasochistic fantasy, and yet they are not brave enough to make it reality.

The sound design by Brandon Walker feels too obviously ominous at first, but once the absurd tone of the work sinks in, it is absolutely appropriate. Erin Cronican’s costumes fit the setting and also stand apart from the scenic design in color.

As a director, Ms. Cronican makes excellent use of the layout of Mike Mroch’s scenic design. The scenic elements are spaced out well in the Paradise Factory’s small black box theatre and the colors help to convey the era in which the play takes place. Additionally, the same scenic elements serve Measure for Measure incredibly well. Every single element is designed to serve both plays. The difference between the productions is the placement of set pieces and set dressing. No material is wasted in this repertory production.

In this Shakespeare’s lesser produced works, the injustices of a corrupt system are revealed through cunning manipulation. The Duke (Brandon Walker) leaves Angelo (William Ketter) and Escalus (Jared Mason Murray) in charge of the city while he pretends to be away. Angelo immediately enforces a law that sentences Claudio (Robin Friend) to death. Claudio’s friend, Lucio (Rusty Flounders) appeals to Isabella (Sabrina Schlegel-Mejia), Claudio’s sister, to plead with Angelo. Of course, Angelo takes his best to take advantage of Isabella’s position, while other similar injustices are being revealed regarding secondary characters like Mistress Overdone and Mariana (Candice Oden). Disguised as a Friar, the Duke sets in motion several tricks that will, in the end, reveal to all the corrupt behavior so that the Duke himself can condemn it.

All of the actors have a keen sense of delivering Shakespeare’s verse which makes this production incredibly enjoyable. The actors who excel at this are Rusty Flounders (who honestly is so good, he actually creeps me out) Jared Mason Murray and William Ketter. Brandon Walker (who directs as well) is in a league of his own because he excels at the dialogue and displays intentional and bold physicality.

Additionally, the play is presented through a lens that makes The Duke the manufacturer of events – which means that Brandon Walker is arranging the set pieces during scene transitions. This lens is made more obvious through the active use of The Prince by Machiavelli. This well-divined storytelling device places emphasis on the Duke, which moves the audience away from the female voices in the play. I cannot decide if this device works against the desired theme (highlighting the lack of female voices) or if it further proves the point.

My two primary criticisms of the piece are this: If an accent is unnecessary, don’t add one; and if you want an actress to portray a strong minded woman, then she needs to embody that. Sabrina Schlegel-Mejia delivers Isabella’s strong minded monologues with strength of voice yet her physical gestures and posture is that of an uncertain teenager.

The design element that interacts with the action of the play the most here is the lighting design by Eve Bandi. Every scene and section of the stage has its own particular color and shape. Shadows also play a large role in the production, which is fitting for such a corrupt world.

Despite all of the serious elements that arise in these two productions, the not-so-subtle humor of The Maids and the more (sometimes) subtle humor of Measure for Measure are more than enough to remind me that there is always something to laugh about.

I encourage support for The Seeing Place Theater because their mission is simple and clear, and evidence demonstrates their achievement of it.

Suzanna BowlingJune 22, 2022
Read More
Scroll for more
Tap
Meet Stephen Unwin Director, Playwright and Advocate for Disabled Children
The York Celebrates It’s 50th Year With I Do I Do