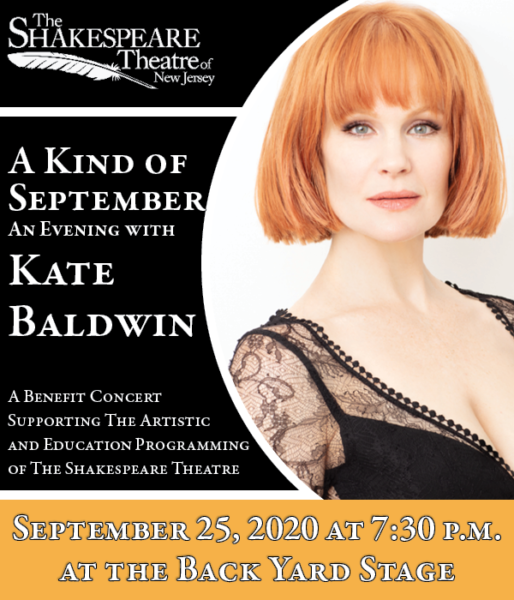 Kate Baldwin was co-starring opposite Bette Midler, David Hyde Pierce and Gavin Creel in the hit Broadway revival of Hello, Dolly!, for which she is nominated for the Tony, Drama Desk and Outer Critic’s Circle awards. Her starring role in the 2009 Broadway revival of Yip Harburg’s and Burton Lane’s hit classic musical Finian’s Rainbow drew Tony, Drama Desk, and Outer Critics Circle Award nominations, and put her on the map as “a real musical theatre star” (New York Post). She received a Drama Desk Award nomination for her role as Jen in Keen Company’s 20th Anniversary revival of Andrew Lippa and Tom Greenwald’s John & Jen. She starred as Sandra Bloom in Big Fish on Broadway, and earned accolades and a Drama Desk Award nomination for her work as Leslie Lyntonn Benedict in Giant at The Public Theater. Off Broadway, she drew raves in Songbird (59E59) and a Lortel Award nomination for her work in Superhero (Second Stage).

“A Kind of September An Evening with Kate Baldwin”, A Benefit Concert Supporting the Artistic and Education Programming of The Shakespeare Theatre of New Jersey will be held Friday, September 25, 2020 at 7:30 p.m.*
at the Back Yard Stage (Saturday, September 26 is reserved as a rain date in the event of inclement weather.)

Tickets are: $55 per ticket, subscribers: $45 per ticket and VIP Pod: $85 per ticket**(Each VIP Pod includes a high-top table, a complimentary bottle of champagne, and gourmet concert munchies.)

The concert will feature signature songs from her acclaimed career, including gorgeous music and expert storytelling from writers like Stephen Sondheim, Kander & Ebb, Jerry Herman and long-time friend and collaborator Georgia Stitt.