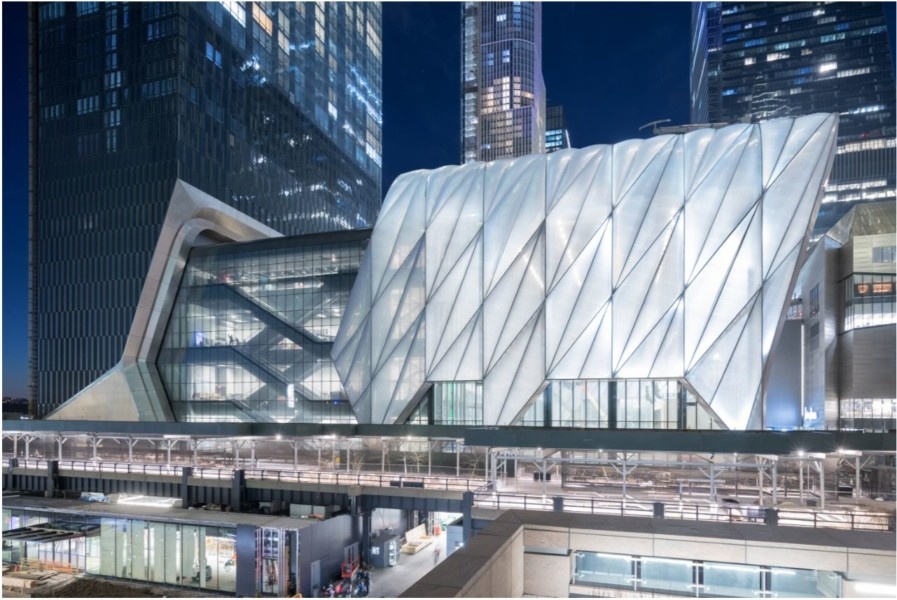 The Shed, New York City’s new arts center dedicated to commissioning, develops, and presents original works of art, across all disciplines, for all audiences, open to the press this morning. The public will be able to see this unique space April 5 with the world premiere of Soundtrack of America. The five-night concert series, conceived and directed by Steve McQueen with a creative team led by Quincy Jones and Maureen Mahon, celebrates the unrivaled impact of African American music on contemporary culture with performances by a new generation of artists. A free live stream of the April 5 concert will be available on The Shed’s website, TheShed.org, and its social media channels.

The cost of The Shed was $500 million but what makes it so remarkable is its movable outer shell that can enclose a 17,000-square-foot space for major performances or exhibitions and hold up to 2,000 people. The space is temperature-controlled by the floor. Powered by an electric engine, the transparent shell becomes a 20,000-square-foot, open-air plaza.

The world premiere of Norma Jeane Baker of Troy, a specially commissioned spoken and sung dramatic work by poet and scholar Anne Carson, starring Ben Whishaw and Renée Fleming, directed by Katie Mitchell, will be performed on April 9 (with previews on April 6 and 7).

In development for more than a decade, The Shed is a nonprofit cultural institution located on city-owned land on West 30th Street between 10th and 11th Avenues on Manhattan’s west side, where the High Line meets Hudson Yards. It is housed in The Bloomberg Building—designed by Diller Scofidio + Renfro, Lead Architect, and Rockwell Group, Collaborating Architect—an innovative, movable structure that adapts to support new work of all kinds. The Shed’s primary program spaces include two floors of expansive galleries, the versatile 500-seat Griffin Theater, and The McCourt, a multiuse hall for large-scale performances, installations, and events for audiences ranging from 1,250 seated to more than 2,000 standing. A rehearsal space, lab for local artists, and event space are located in The Tisch Skylights on the top floor.

“As a commissioning home for artists from the worlds of performance, visual arts, and pop, The Shed is a place for all artists and all audiences to meet,” said Artistic Director and CEO Alex Poots.

Dan Doctoroff, Chair of The Shed’s Board of Directors said, “The Shed is doing something very different: a new idea of a cultural institution; an unprecedented building in a new part of the city; a new team commissioning all new work. It is uniquely of New York, dedicated to the pursuit of boundless artistic ambitions across all art forms for all audiences.”

Elizabeth Diller, of Diller Scofidio + Renfro, said, “Eleven years in the making, The Shed is opening its doors to the public as a perpetual work-in-progress. I see the building as an ‘architecture of infrastructure,’ all muscle, no fat, and responsive to the ever-changing needs of artists into a future we cannot predict. Success for me would mean that the building would stand up to challenges presented by artists, while challenging them back in a fruitful dialogue.”

David Rockwell, of Rockwell Group, said, “The Shed was conceived as an adaptable and structural palette that will allow an extraordinarily diverse group of creators and artists to incorporate the building into their work. After what has been a wildly satisfying collaboration, we are thrilled to hand The Shed over to the artists and audiences who will carry it forward. I couldn’t be prouder. It’s an exciting addition to the long lineage of institutions that have kept our city on the cutting edge of the arts. Ultimately, it is a testament to the energy of New York City.”

In recognition of a $25 million gift from Kenneth C. Griffin, The Shed announced earlier this week that its 11,700-square-foot, 500-seat theater has been named The Kenneth C. Griffin Theater. “The Shed will create new opportunities for artists and audiences to join together in unique experiences. Over a decade in the making, this space reflects New York’s determined commitment to fostering artistic expression and the idea that the arts should be accessible to everyone,” said Griffin. Including this gift, The Shed has raised $529 million toward its capital campaign goal of $550 million, which includes building costs, organizational start-up expenses, and support for the creation of new work.