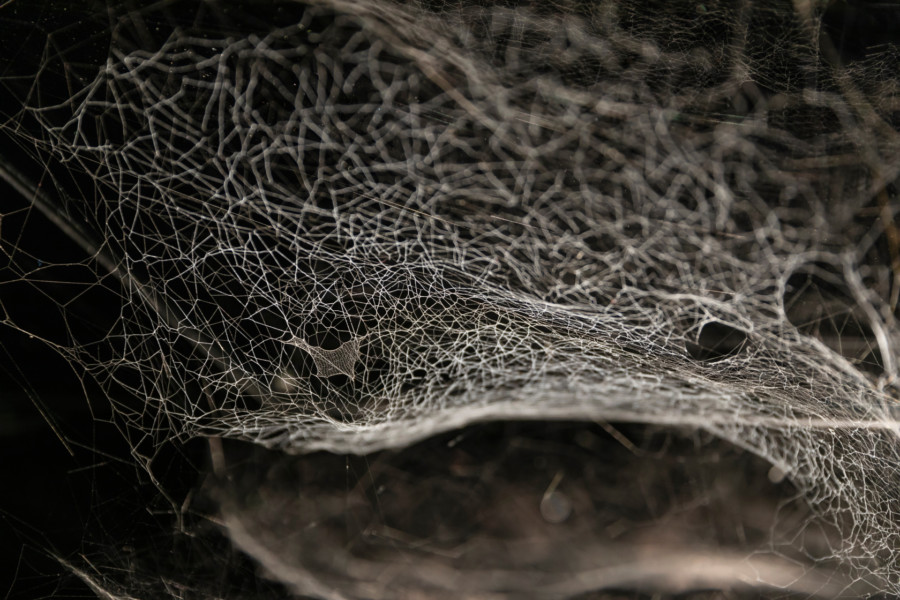 The Shed will present the largest exhibition in the US to date of works by artist and community activist Tomás Saraceno, producing a multisensory experience throughout the new arts center. On view from February 11 to April 17, 2022, Tomás Saraceno: Particular Matter(s) features Free the Air: How to hear the universe in a spider/web, a 95-foot-diameter installation commissioned by The Shed that will fill the soaring 17,000-square-foot McCourt space, and an expansive survey exhibition of the artist’s works and projects in The Shed’s Level 2 and Level 4 Galleries. Combined, the exhibition totals approximately 25,000 square feet. Through floating sculptures, interactive installations, and an artistic process that centers collaboration, Saraceno proposes a situated knowledge of climate justice informed by the various perspectives of human and nonhuman lifeforms that have been disregarded, such as the air, spiders and their webs, and communities impacted by inequitable environmental policies and practices.

“At the heart of Tomás Saraceno’s work is a new way of inhabiting and experiencing the world, one that centers on an ecologically post-fossil fuels future. Tomás presents the necessity to reevaluate how we perceive and operate in the world and what to expect from it, which he achieves through interconnected, non-hierarchical collaborations across the human and nonhuman,” said Emma Enderby, The Shed’s Curator-at-Large. “The air and the particles that define it, spiders and their webs, and our visitors are all protagonists in Particular Matter(s) at The Shed.”

In a call for environmental justice, Saraceno’s artistic collaborations renew relationships with the terrestrial, atmospheric, and cosmic realms, particularly as part of his community projects, Aerocene and Arachnophilia. Particular Matter(s) brings this layered approach together, rethinking dominant threads of knowledge in the Capitalocene era, while celebrating the importance of all who make up this vibrating, dynamic ensemble.

“This will be Tomás Saraceno’s first major survey exhibition in the United States, a multidisciplinary exhibition that showcases Saraceno’s visionary, decades-long practice, dedicated to imagining sustainable futures amid our worsening global climate emergency,” said Alex Poots, The Shed’s Artistic Director and CEO. “Spanning three-quarters of our building, Saraceno’s exhibition explores ways of witnessing the environment through ecology, interspecies communication, and environmental justice. We very much look forward to welcoming audiences to experience this new show.”

For more than a decade, Saraceno has been imagining a world free from borders and fossil fuels, in collaboration with spiders and their webs, situated forms of knowledge, and the vibrant superorganism that is the cosmic web. In an era of climate emergency when ecosystems are at risk, Saraceno’s work addresses environmental racism and justice, envisions alternative ways of engaging with Earth’s atmosphere, and deepens an understanding of interspecies cohabitation and communication. Featuring new and recent work, Particular Matter(s) builds upon Saraceno’s platforms and projects that invite visitors from around the globe to more deeply understand and celebrate the radical interconnectedness of all things, and to imagine a world that adapts to and survives the climate crisis.

FROM THE ARTIST
Free the Air: How to hear the universe in a spider web? “Close your eyes, cover your ears, and sense felt vibrations…Gravitational waves resounding the cosmic web, yet to be felt. Infinite sensing of the world, life-forms weave constellations.”

Free the air from particulates! A particular matter for spider/webs: “What you see is my mind, my body. I cannot eat until I weave the mouth that feeds me. These threads belie the geometries of extinction, telling stories against extraction. Mind the stories you are spelling out in your trajectories.”

Knowledge is never without its situation, its context. It is never without specific identities whose interactions define and confine the production of knowledge. Attune to what knowledge and whose knowledge weaves the Web of Life, and who benefits from its use.

How can we hear the universe in a spider/web to Free the Air from Particulate Matter? Spiders and arachnid diviners might hold the answer.

— From MULTIVERSE and SPIDER/WEB INTELLIGENCE from Tomás Saraceno’s Arachnomancy Cards, 2019–.

The sculpture’s interior will feature floating web-like floors stretched end-to-end on two levels, the first 12 feet above the ground, the second 40 feet. Visitors enter the installation to find themselves enveloped in a light mist, suspended on these nets floating in 450,000 cubic feet of air, or participating from wheelchair-accessible platforms on the lower level. Then, with the stage set, a concert in four movements for the air and for spider/webs begins as participants see what they cannot hear: particles of black carbon PM2.5 fogging the air, moving between participants and the geography of a spider’s web. The lights dim as the nets shake with recorded sound waves produced by spiders building and interacting with their webs. As the space enlarges, much like the expanding universe, unheard voices become felt vibrations. In Free the Air, vibrations of climate justice with the Aerocene community offer participants a portal to connect across species, ability, and origins. The body becomes an ear, perceptive to the vibrating net reverberating beneath it and to the rhythms of other species and situated knowledges. Formed out of this entanglement of scales, a new togetherness emerges from these webs of life.

During the run of the exhibition, a version of Free the Air’s concert will be available via the Arachnomancy App. People will be able to consult the spider/web oracle anywhere in the world and share in this sensorial celebration of interspecies rights.

Level 2 Gallery
The Shed’s Level 2 Gallery houses a survey exhibition and inquires into Saraceno’s interest in spider/webs and divination practices, particulate matter in the air (particle pollution), and terrestrial and cosmic cloud ecosystems. Works on display include such sculptures as Webs of At-tent(s)ion, made in collaboration with spider/webs from The Shed and other locations, and the artwork Particular Matter(s). The vibrations of these and other artworks were recorded for the concert Free the Air.

The second new Shed commission, titled We Do Not All Breathe the Same Air, was greatly influenced by scholar Harriet A. Washington, whose discourse with Saraceno informed the artist’s research on the uneven distribution of pollution along geopolitical and racial lines for this commission. The first iteration of this project, Calendrier Lun-Air de Paris at Palais de Tokyo in 2018, arranged filter tapes from BAM-1020 air pollution monitoring machines to visualize air pollution and its hourly discrepancies in Paris. These paper strips capture the amount of particulate matter in the air each hour in the form of variably shaded dots. As air pollution increases during an hour, the corresponding dot darkens in color on the paper strip. Readymades created by the atmosphere itself, these tiny dots reveal the intertwined relationship between fossil fuels, location, race, and the air based on pollution density. For We Do Not All Breathe the Same Air, Saraceno and The Shed collected filter tapes from air pollution regulation agencies across the United States, revealing what areas are most affected by air pollution across the country. Local community groups including El Puente and Bronx United contributed to conversations behind the development of this artwork. In March 2020, a portable ambient air quality machine called the E-BAM was installed on The Shed’s roof to collect air quality readings for this commission in partnership with Met One Instruments, the company responsible for developing the Beta Attenuation Mass Monitor in the mid-1990s.

Level 4 Gallery
Another highlight of the exhibition builds upon the Aerocene community, initiated by Saraceno. This open-source project is devoted to interdisciplinary endeavors seeking to activate ideas toward post-fossil fuel life on Earth. The various works presented on this level all float with heat provided directly by the sun instead of fossil fuels, helium, hydrogen, solar panels, batteries, or burners, moving towards an Aerocene era, and demonstrate how to free the air from particulate matter.

The Aerocene Backpack, on view outside the Level 4 Gallery, is a portable flight starter kit that encloses an inflatable sculpture that anyone can borrow from the Aerocene Foundation. In January 2020, Aerocene flew with the communities of Salinas Grandes, setting 32 world records recognized by Fédération Aéronautique Internationale for distance and duration of a piloted balloon flight powered by the sun and air. On view will be the large-scale installation Museo Aero Solar, an ongoing sculpture made by various communities from around the world that repurpose plastic bags that float in the air free from fossil fuels. To date, hundreds of thousands of plastic bags have been reused from more than 30 countries to build this sculpture. However, Museo Aero Solar is not a singular object; it can be created as a DIT (Do-It-Together) project wherever people embrace the possibility of flying free from carbon. Through a virtual flight simulator utilizing open-source meteorological data, plan your journey to The Shed and move into an era free from borders and fossil fuels with the Aerocene App.