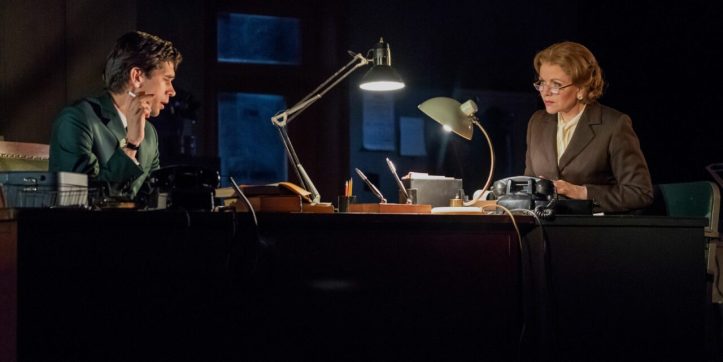 Poetically spinning out a tale that is as convoluted as it is hypnotizing and beautiful, Anne Carson’s Norma Jeane Baker of Troy transcends the linear structure of playwriting and dives into themes of the follies of war, testosterone fueled destruction, and the abuse of beautiful women.  It’s the story of Helen of Troy told in sung poetry and lyrical musing, with the compelling substitution of one icon, Marilyn Monroe for the other, and merging it all together with Euripides’ tragicomedy alternate telling, “Helen“. It reverses the point of view, challenging us to see Helen not as a seductress but of a tragic creation; a rape victim, an abducted and held beauty, draped in sorrow and addiction, as seen through her smokey eyes. With that framework in place, applied delicately and deliberately like polish to nails, the icon becomes a victim, a cloud, and a symbol, sharing the spotlight with other famous Hollywood fabrications, Arthur Miller, Monroe’s third husband; Truman Capote, her confident; Fritz Lang, her director; and naturally, the singer Pearl Bailey, who all get a say in this tragic retelling. But what, I ask, are we to make of it…

It’s on this one particular night, the one that leads us from 1963 to 1964; New Year’s Eve, a nervous business man enters into a wide office. The space is cluttered to perfection, created with detailed precision by Alex Eales (National Theatre’s Cleansed), with delicate and authentic pooled lighting by Anthony Doran (Schaubühne’s Shadows…). The expansive stage, structured wide and outwards at the newly opened The Shed in Hudson Yards, feels tense and overwhelming for the young man. Portrayed with daring intelligence by Ben Whishaw (Broadway’s The Crucible), he sits in a circle of symbolic light, illuminating his delicate frame from an old desk lap. He’s unpacking and preparing, as time seems to be of the essence on this snowy cold night. The New Year is heavy with tragedy and hope, and it sits solidly and heavily on the amazingly gifted young actor’s shoulders as his character begins the recording of the “History of War“, “lesson 8“. These taped interludes, alternating between the narrative and lyrical components of this staged poem, drifts us into darkness and doubt. Accentuating the un-realness and the descent into his personal Hades, his fervor is forced by compulsion, driven to the depths of despair with a curiosity and delusional attempt to understand.

The writer of this strange and compelling piece, Anne Carson, writes in the program that “language is a way into moral life….even when these [belief] systems are confused, contradictory, or crazy“. As fireworks explode out on the streets, Whishaw’s voice trembles as he creates these ‘crazy’ abstractionisms. There seems to be an urgency in his obsession and an obsession in his pronouncements, as he tacks Norma Jeane up on the board; beautiful photo images of the iconic Monroe, as a deliberate and gentile Renee Fleming (Broadway’s Carousel) enters with professional purpose and ease.  Payment is made, and the night’s work begins.

“They play is a tragedy“, he says, as Fleming types proficiently into her machine, turning dictated text into some sort of epic sculpture of a doomed beauty.  The language is hard to follow, with the pieces never seeming to weave into a logic that my brain is aching for, but the imagery is clear and the pictures formed are intriguing and exact. They just don’t fit together, as if they are pieces of different puzzles; one of a historic landscape, and another from a movie still. The layered web keeps getting spun, in the order of the anarchy of thought. Persephone, one of the characters I just made an acquaintance with across town in Broadway’s delectable Hadestown, shows up here like a Queen ghost from Hell, her beautiful persona described into being as present as the other list of characters. All this, just as Whishaw begins his transformation. The ukulele is played lovingly by him, sweetly serenading the singer, as the growth of layers upon layers buries the two deeper in ideas and utterly mental inner-voice dynamics. Words and phrases begin to be repeated from inside out. It’s a gimmick, but it’s also the truth; the truth of the feeling and the questions that are all about a cloud that resembles the lady. Fleming’s spoken voice, like velvet on a snowy night, starts to become more involved as she gets more engaged, soaring up and beyond.  It’s a spectacular inclusion, pairing her voice with this material, finding the beauty in the internal dialogue, and melting that gorgeousness  with Whishaw’s morphing characterization. It accelerates as the proper woman becomes increasingly engaged and concerned in this demented reimagining, forcing panic and intrigue to become one with her talent of dictation.

[a recording, played from a tape]

“There is a simple metaphor at the heart of this production about how the female voice—sometimes hidden, sometimes forbidden, sometimes misunderstood, and sometimes heard loud and clear—reverberates through culture. In the spirit of form meeting content, the soundtrack is made entirely from samples of Renée’s extraordinary voice—sometimes hidden, sometimes loud and clear. We recorded every note, every consonant and vowel sound, creating new ‘instruments’ out of which her live voice slowly emerges. Everything you hear—a double bass, percussion, a police siren, the air conditioning, otherworldly drones—is made out of one woman’s voice.” — Paul Clark, Composer

The score and the soundscape by Paul Clark (Tate Modern’s Silver Swan) and sound designer Donato Wharton (Robert Lepage/Ex Machina’s The Blue Dragon), are wildly entrancing, taking  every deliberation heard, from the fireworks outside to the swirl of a fan inside, built out of the recordings of Renee Fleming’s voice with detail and care. It’s a transformation of sorts, much like the gulping down of Whishaw’s haunting descent. Champagne et al. His is a trembling and delusional portrayal of the pain and torment of the goddess, Marilyn Monroe, one that we can’t take our eyes off of, even as we struggle to understand. The white dress, the one we knowingly register as that one from that famous scene, eventually makes its predetermined entrance, courtesy of the strong costuming by Sussie Juhlin-Wallén (Young Vic’s Ah, Wilderness) and a long list of technicians who are credited with each reconstructed piece. The triangular desire, played out to the sound of Fleming’s spectacular vocals, a transcending quality worthy of just about anything to hear, is a dream or a nightmare, depending on how you take it all in. Katie Michell (Virginia Woolf’s The Waves as live cinema) pulls us through with her taunt direction, never making this piece easy to take in or understand, while also never letting it drag us down. I’m pretty sure I didn’t understand, but I also was never turned off nor did I ever tune out. I knew that when that platinum blond wig would finally be placed on Whishaw’s prepared head, much to the displeasure of a few tightly wound patrons around me, that the end of this war and tragedy was about to come to a close. I sat confused but anxious for Marilyn, engaged by the talent presented but alienated from a logical understanding of what I just saw. But I did echo one of the sentiments proclaimed in this piece time and time again. When the lights went down, I turned to my fellow brave theatrejunkie, and said “I need a drink” followed by, and “I need to think“.

Suzanna BowlingApril 9, 2021
Read More
Scroll for more
Tap
Blanket Fort’s Dr. Jekyll & Mr. Hyde is Must See Theatre
Cabaret in May Pulls Out All The Stops