The Sheen Center Honors 9/11 With You Are Here: A Come From Away Story 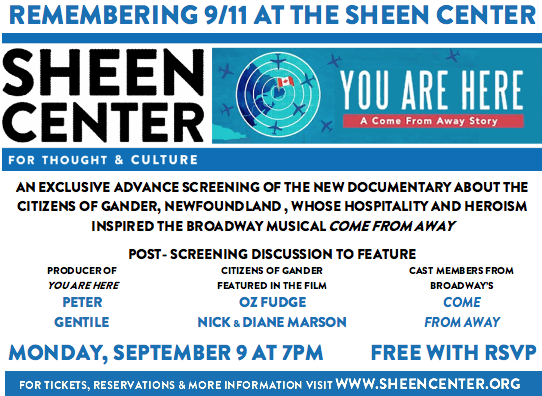 The Sheen Center Honors 9/11 With You Are Here: A Come From Away Story

On Monday, September 9 at 7PM, The Sheen Center for Thought & Culture (18 Bleecker Street at the corner of Elizabeth Street in NYC), launches the week of 9/11 remembrance with a special advance screening of You Are Here: A Come From Away Story. A documentary celebrating the hospitality, heroism and humanity of a small Canadian town on 9/11, You Are Here, is influenced by the same events that inspired the hit Broadway musical Come From Away.

A post-screening discussion will feature the documentary’s award-winning producer Peter Gentile; citizens of Gander featured in the film, Oz Fudge and Nick and Diane Marson; and cast members from Broadway’s Come From Away. Presented by The Justice Film Festival and MDF Productions, the exclusive, advance screening at The Sheen Center’s Loreto Theater is free and open to the public by RSVPing on the website: www.sheencenter.org/shows/here.

On September 11, 2001, global chaos ensued as the World Trade Center Towers came crashing down, and the fate of airline passengers en route to America was literally thrown off course. When 38 planes carrying 6,500 individuals arrived at Gander, Newfoundland, the eastern-most point of North America, the small Canadian town came together to host a group of strangers who would leave as family. “9/11 is a day that continues to have a deep impact on all New Yorkers,” says William Spencer Reilly, Executive Director of The Sheen Center. “As a downtown arts center, 9/11 is particularly resonant for us. So, as New York launches a week of remembrance and reflection, we at The Sheen Center are proud to host this special advance screening event. You Are Here is a meaningful, touching film celebrating the glowing humanity and compassion that poured from a community at one of the world’s darkest hours. And the perfect finish to this moving event is to have the producer Peter Gentile and cast members from Broadway’s Come From Away here to share this evening with us at The Sheen.

The Sheen Center is proud to host the Justice Film Festival annually, so we think that this special screening event is a terrific ‘curtain-raiser’ for the full festival coming in November.” Following the exclusive September 9 advance screening at The Sheen Center, Fathom Events and MDF Productions will present You Are Here in nearly 800 select movie theaters on Wednesday, September 11 at 7PM local time, through Fathom’s Digital Broadcast Network (DBN). MDF Productions is an award-winning producer of non-fiction content for film, TV and digital media. Winner of the inaugural TIFF.40 Platform Prize and recipient of the ‘Best Feature Length Documentary’ Award at the Canadian Screen Awards (2016) for Hurt: The Steve Fonyo Story.  The Justice Film Festival inspires justice seekers by presenting films of unexpected courage and redemption that are diverse in their issues and geography.

The seventh annual Justice Film Festival will return to The Sheen Center for Thought & Culture November 13-16, 2019 in New York City. As always, this year’s event will include feature films, documentaries, and shorts from both well-known and emerging filmmakers that shine a light on social justice. Now more than ever the conversations we aim to introduce possess a weight and meaning for those of us pursuing justice through our words and actions. All are welcome to join us on this journey, with these films as our guide to a new awareness of relevant issues and ideas that have the potential to elevate our culture for the common good. The Sheen Center for Thought & Culture (www.sheencenter.org) is a New York City arts center located in NoHo that presents a vibrant mix of theater, film, music, art and talk events. The arts center of the Archdiocese of New York, The Sheen Center serves all New Yorkers by presenting performances and artists that reflect the true, the good, and the beautiful.  Named for the late Archbishop Fulton J. Sheen, best remembered as an inspirational author, radio host and two-time Emmy Award-winning television personality, The Sheen Center reflects his modern-day approach to contemporary topics. The Sheen Center is a state-of-the-art theater complex that includes the 270-seat off-Broadway Loreto Theater, equipped with five-camera high-definition TV and live-stream capability and a multi-track recording studio; the 80-seat off-off-Broadway Black Box Theater; four rehearsal studios; and an art gallery.

Suzanna BowlingJanuary 24, 2023
Read More
Scroll for more
Tap
Frontmezzjunkies Arrives at the 2019 Toronto International Film Festival With Much to be Excited for.
New York City will Host Annual 9/11 Heroes Run to Honor Those Lost on September 11th and the Wars Since