The Silencer Shows What it Takes To Stand Out 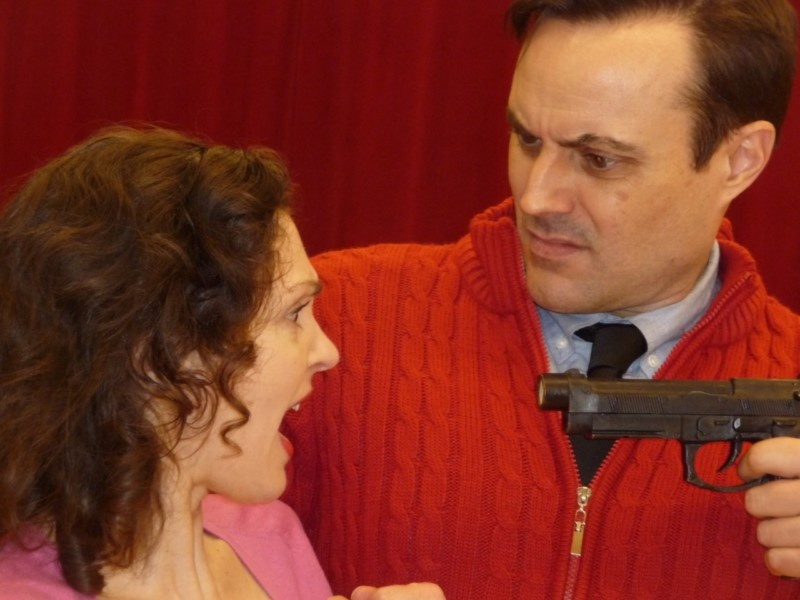 The Silencer Shows What it Takes To Stand Out

Howard Zuckerman’s black comedy The Silencer at the NY WinterFest is well written, superbly directed by Sarah MacDonnell and wonderfully acted. It is everything you want to see when seeing a show for the first time.

The Silencer follows Marc Handy (Matt W. Cody) a wanna be cop, who loses his wife (Sara Koviak) due to the negligence of a driver (Margaret Catov), more intent on talking on her cell-phone than driving. The incident derails Marc, as he takes the law into his own hands by silencing all the rude cell phone users he encounters. As the police (Jillie Simon and Michael C. O’Day) become involved, we meet the obnoxious patrons (Ms. Catov, Ms. Koviak, Mr. O’Day and a hysterical Denis Ooi), who drive this man to madness.

This satirical look at our obsession with cell phones, is done through a series of 22 vignettes that capture every senerio you can imagine. Each one of these could easily be taken out of context and thrown into an episode of “Saturday Night Live.” They are that funny. I especially loved the scene when Marc and his silent girlfriend (Ms. Koviak) are seeing a silent movie. Marc gets driven insane by the most annoying patron (Mr. Ooi) you have ever encountered. He is so obnoxious you will feel your skin crawl.

The actors for the most part had to take on several roles, accents and characterizations and they were all in sync. it is hard to single anyone out as they worked as a team. Rare and quite wonderful.

Bravo to Ms. MacDonnell’s direction, as she took 22 scene changes and made them into a dance. We knew they were happening, but they were seamless. She also brought out some wonderful performances from her actors and made them a team working together like a well oiled machine. This is something you hardly ever see. I look forward to seeing more of her work.

Mr. Zuckerman’s writing is humorous, insightful and thought provoking. I saw another one of his shows in last years SummerFest and it is a joy to watch his work grow. Though The Silencer need more of a flow, for a first time production this was top notch work and I honestly could see theatre companies picking this up. It is a viable piece that I am sure has a long life.

To learn more about this playwright go to howardzuckerman.com.

Suzanna BowlingNovember 19, 2022
Read More
Scroll for more
Tap
The Tank’s Eat The Devil Doesn’t Satisfy The Hungry
Ain’t Too Proud – The Life and Times of The Temptations Offers Digtal Lottery and Student Rush