The Sound Inside Is Haunting 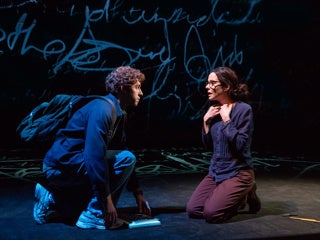 The Sound Inside Is Haunting

Mary-Louise Parker and Will Hochman Photo by Jeremy Daniel

In the beginning of The Sound Inside Bella states “Scattered among these monuments are three of my own contributions to the world of letters: two slim volumes of short stories published before I was hired by Yale, and an under-appreciated novel written in my late thirties that, despite some flattering reviews and a mention or two on a handful of year-end lists, is struggling to stay in print.”

By the end she states “I read the cover page, which I only half-noticed the first time: To Lie Facedown in a Field Full of Snow. Nothing else. A work of fiction attributed to no one and without a copyright line.”

We first meet Bella (Mary-Louise Parker) in a park covered in Autumn. Bella is in her tenth tenured year of teaching creative writing at Yale. Her claim to fame is a first edition book collection. She has Cancer. Enter Christopher (Will Hochman) , who enters her inner sanctum of her office right before Thanksgiving break. Christopher is in Bella’s creative writing class and tells her, he’s writing a novel. As boundaries are crossed, lines blur, Bella and Christopher are both lonely and dysfunctional in their own way.

During the course of the play Bella speaks directly to the audience. Her moments with Christopher are actually memories. The context of the novel seems to be Christopher’s life and it is haunting and a little disturbing. In the meantime Bella is dealing with the Cancer diagnosis.

Both Mary-Louise Parker and Will Hochman performances are complex, rich and utterly human.

David Cromer’s direction is exquisite as he makes each moment compelling and yet so simple. Cromer allows his actors to unfold, revealing thin layers of isolation and then connection.

The Sound Inside started at Williamstown Theatre Festival and it is surprising Adam Rapp has taken so long to make it to Broadway. The Sound Inside will stay with you for awhile, almost haunting your psyche.

Heather Gilbert moody lighting, Daniel Klugger’s original music and sound design and David Hyman’s costumes all give us insights into who these two souls adrift are.

Have we been watching Bella trying to justify publishing Christopher’s novel as her own? Or have we been hearing her novel for the first time as she reads it out loud? What ever the scenario this play will get inside you skin.