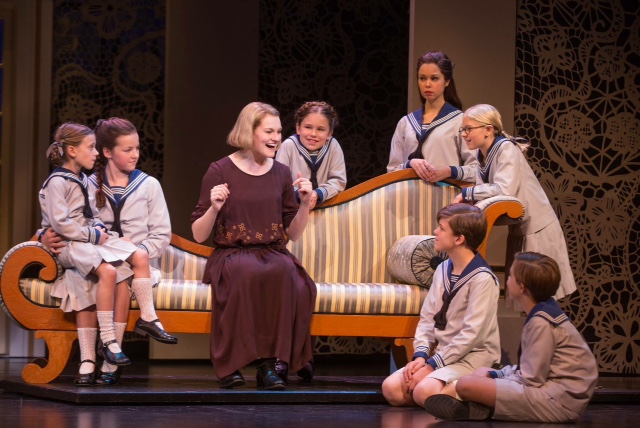 The Sound Of Music – The Hills Are Still Alive

The Sound Of Music – The Hills Are Still Alive 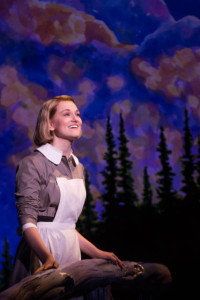 There is a delightfully familiar soundtrack resonating from the Cadillac Palace Theatre for the next two weeks. One performed by a chorus of singing nuns and just over a half dozen harmonizing children of the Family von Trapp. That’s right, the Richard Rodgers and Oscar Hammerstein II classic, The Sound of Music has returned to cast its formidable and familiar spell over generations of entranced audiences from the Windy City. Director Jack O’Brien endearing new production of The Sound of Music is a fabulous and family-friendly theatrical event. That gorgeous score, music written by Richard Rodgers, lyrics by Oscar Hammerstein II as well as a book by Howard Lindsay and Russel Crouse, suggested by The Trapp Family Singers by Maria Augusta Trapp, is instantly recognizable. From the epic, towering sets and lush, romantic lilac and magenta colored backdrops, designed by Douglas Schmidt, striking costumes crafted by Jane Greenwood with wigs and hair design by Tom Watson, potent vocals from the entire cast, and the opulent full orchestrations, this show doesn’t disappoint. 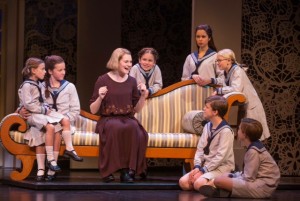 Kerstin Anderson and the children

The brightest gem in the crown that is this particular production of The Sound of Music, the feisty, nun-turned-governess, Maria Rainer played both for laughs and pathos by the wonderful Kerstin Anderson. Charming her way into the Abbey, the von Trapp family, and most importantly, into the audience’s hearts, Anderson is in great form, her penetrating voice and capable individual style commanding the role. How do you a solve a problem like Maria?….when the entire audience has experienced the pinnacle performance of this character, portrayed so winningly by the iconic Julie Andrews on film? The simple answer is, you don’t! Anderson was all gumption and resourcefulness, putting her own beguiling spirit, lovely soprano voice and very American accent in putting her own unique stamp on the Maria character. 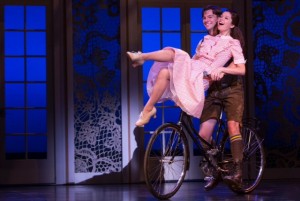 As the family patriarch, Captain von Trapp, Ben Davis fills the suit quite well. An imperious vocal style combined with dashing good looks and statuesque demeanor, it was easy to see why Maria is so effortlessly enchanted. He is darling both when partnered with the small children in the cast, as well as being a romantic leading man, one on one, with Maria. The best moment, when partnered with Kerstin Anderson’s Maria, completing an intricate and traditional folk dance, ending with her flushed cheeks, the almost schoolgirl crush visibly apparent on her face. We really do believe they are falling in love right before our eyes, as those two have abundant onstage chemistry together. Also in great voice, Mother Abbess, (Melody Betts) a true talent who earned  thunderous ovation after she forcefully hit the final high note at the end of act one’s “Climb Ev’ry Mountain.” The strength of her instrument as dynamite as her unconventional casting. Just outstanding. Even the supporting roles of Captain von Trapp’s millionaire love interest, Elsa Schraeder (Teri Hansen) and social climbing Arts Minister friend, Max Detweiler (Merwin Foard) are played with precision by two actors who do a lot with a little. 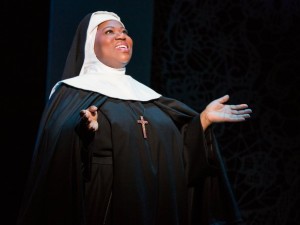 It is often joked one should never share a stage with kids or animals, but the Von Trapp children were as appealing as they are vocally talented. The “Do-Re-Mi” number in particular, fused with athletic choreography from Danny Mefford, reticent of Mary Poppins The Musicals’ “Supercalifragilisiticexpialidocious,” put it’s own visual stamp on a familiar ditty. When we initially met oldest daughter Lisel (Paige Silvester) she’s played off-putting, petulant and surely. An unconventional storytelling take on her character for certain, but all was quickly forgiven during the sumptuous “Sixteen Going on Seventeen” (my personal favorite from the show) duet performed with messenger beau, Rolf Gruber (Dan Tracy).  The number was as agreeable and awkward as any inexperienced, young sixteen year old girls first crush should be. Those two have potentially long and fruitful careers ahead of them. Their blossoming stage romance punctuated with graceful lifts during their dance interlude. 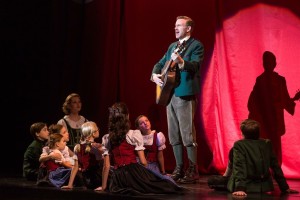 Act two’s “Edelweiss” was as idealistic and heart breaking as it needed be. All of the production numbers throughout were solid, especially little Gretl (adorable pixie Audry Bennett) who will warm your heart as she delivers her precious “ku-kus” from the “So Long, Farewell” family number. Everyone sitting around me was smiling, fully engaged by the von Trapp children performances, played in succession by Liesl (Paige Silvester), Friedrich (Jeremy Michael Lanuti), Brigitta (Iris Davis), Kurt (Austin Mevine), Louisa (Ashley Brooke), Marta (Kyla Carter) and the aforementioned Gretl (Audry Bennett). 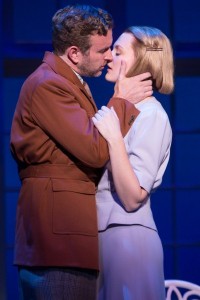 There is much to enjoy when experiencing an established musical performed well. This production of The Sound of Music breaks little new ground, but to borrow from the popular expression, “if it ain’t broke, don’t fix it.” The soundtrack is stuffed full of so many familiar anthems, each of which has become part of the great lexicon of the American patois. Trust me, it is both one of “My Favorite Things” and “Something Good.” Lavishly crafted, faithfully executed, visually outstanding, and exquisitely sung, this production of The Sound of Music is top notch and highly recommended.  See it quickly Chicagoland, this Music is only stopping by the Windy City for two short weeks before it also says “So Long, Farewell.”

The Sound Of Music is now playing at the Cadillac Palace Theatre through June 19, 2016