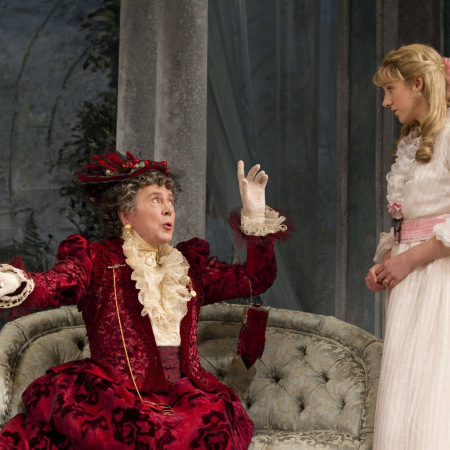 What a joy, I must say, with complete earnest. To have the honor of seeing theatre played out so well and with such an exacting eye for detail and the perfect turning of a phrase. I can remember, with great pleasure, – “what else should bring one anywhere?” – the excitement I first felt when I heard that Oscar Wilde’s 1895 comedy The Importance of Being Earnest would be revived at Roundabout’s American Airlines Theatre in 2011. To make matters even more exciting, I also learned that the staging was to be arriving from the 2009 Stratford Shakespeare Festival’s acclaimed production that also starred and was directed by the incomparable Brian Bedford (Broadway’s Tartuffe; London Assurance). This, most definitely, was one event this Canadian and avid Stratford Festival attendee just could not miss, and now, for our pandemic lockdown viewing pleasure, captured live back then in high-definition, L.A. Theatre Works is gifting us with this most ideal husband present, offering us the chance to revisit this masterpiece of a production and play. As David Hyde Piercestates most wisely in the taped introduction to this filmed event; the play is meticulously funny on paper, but actually very hard to pull off on stage, in all seriousness.

But lucky for us, as directed by its clever star, the revival is as perfect of a production as one could hope for. It is very clear from the first moment that Bedford knows his Wilde through and through, expertly finding the humor, which there is a tremendous amount, in all the smart seriousness that exists inside the text and the characters. The verbal acrobatics are played out exactly as they should be, finding witty authority in the beautifully and intricately written text in the most exacting of ways. This play can not be played for laughs, and that, my dear Cecily, is exactly why this production is uncompromisingly perfect. It hums along as magnificently and hilariously as one could ever hope for. “These are joyful tidings,” I must say.

Directed for the cinema by David Stern, “The Importance of Being Earnest: Live in HD” offered up for streaming until the end of May, is proof positive that Bedford, back in 2009 when he first steered this ship to harbor in Stratford, Ontario, has done his job to literal perfection, celebrating the Wilde text with a revival unparalleled in its wise glory. The three acts, played out with a joyful intoxication of language and art, come alive with each and every pout. Played out as perfect of a rendering as possible on British set and costume designer Desmond Heeley’s stunningly well-appointed visuals, the delivery matches the material with pointed ease and a giddy grace. The words sing out lyrically, never failing to connect as they should, especially due to the well orchestrated glorious cast, crew, and exacting direction.

The Importance of Being Earnest is a spectacularly wise comedy of mistaken identity, riding on the wings of ridicule, particularly around moral codes of propriety and social structure. Class structuring seems to matter more than honest engagement, especially with the two young leading men, John Worthing, played strongly by David Furr (RTC/Broadway’s Noises Off) and Algernon Moncrieff, beautifully portrayed by the effervescent Santino Fontana (Broadway’s Tootsie). They both are smitten and pursue two young ladies, Gwendolen Fairfax and Cecily Cardew, played meticulously by Sara Topham (RTC/Broadway’s Travesties) and Charlotte Parry (ATC’s Bluebird) respectfully, by inventing wildly imaginary characters to cover up their secretive antics, one, not surprisingly by the name of Earnest. There is a great deal of talk swirling amongst these young people around the ideals of love and marriage – “is marriage as demoralizing as that?” – with proposals sprouting out of thin air, much to the disapproval of Gwendolen’s mother, the formidable and proud Lady Bracknell. She, most magnificently, is portrayed to the highest order by Bedford himself. The Lady finds little to be in love with though as all matters of the heart need to be thoroughly and ceremoniously questioned, especially in regards to John Worthing’s affection for Gwendolen. Here is the beginning of a two fold problem. First, Gwendolen thinks John’s name isn’t John, but Earnest, and luckily for John, she absolutely adores the idea of marrying a man named Earnest. And secondly, John, although considered wealthy and solidly raised by a rich man, doesn’t appear to have the proper pedigree to impress the stern, snobby, and uber-proper Lady Bracknell. And I haven’t really even gotten into the most Earnest of mistaken identity parts., but I can say, that there is some pretty seriously fun “Bunburying” going on, played out hilariously by these two finely drawn men. Trust me, this is one event you won’t want to find your way out of, even if you have a slight chill.

The “bunburying” that does go on, courtesy of these ridiculous men, particularly of Algernon, is the cause of all sorts of cross complications. Wilde expertly has crafted his way around a garden and a drawing room with a witty wise diabolical ease, toppling pillars of social society at a drop of a well constructed barb. For a play written in 1895, Earnest works its magic at ever turn, ever pulling apart the icons of education and religion with glee, especially within these other two finely built creations: Cecily’s tutor, Miss Prism, played gloriously by the always wonderful Dana Ivey (1984 Broadway’s Sunday in the Park…), and the local reverend Chasuble, portrayed adoringly by Paxton Whitehead (Broadway’s Absurd Person Singular), each wonderfully serving up Wilde like a delicious cucumber sandwich ready for consumption. As delectable as they can be, they are equaled with the de-gorgeous eye rolls and quips from Algernon’s man, Lane, played marvelously by Paul O’Brien (Broadway’s Six Degrees of Separation), and Cecily’s attendant, Merriman, delightfully embodied by Tim McDonald (Broadway’s The Government Inspector). A tastier crew of four could hardly be found.

The cross-dressing parade of Lady Bracknell is an unmatched triumph within, giving Bedford the purest of opportunities to deliver the Lady’s most haughty lines with superb seriousness. It’s a game-changing moment, this cunning calculation, elevating the piece and everyone around him with an utterly clever and fun finesse. Gwendolen telegraphs it all to us when she serves up this utterance with all seriousness, “In matters of grave importance, style, not sincerity, is the vital thing.” Wiser words could not be said, as Bedford intuitively and expertly guides us in and around Wilde, displaying the seriousness of the man’s style, his wit, and, more importantly, all that could be known about his Earnest.

This high-definition event brings the best of Broadway to movie audiences, and includes the added bonus of host David Hyde Pierce taking viewers backstage for a special behind-the-scenes peek. “This delightful production of Earnest shouldn’t be missed, and for the people who couldn’t see it on Broadway, Broadway is coming to them,” he said.

“The Importance of Being Earnest: Live in HD” was captured live in high-definition from Roundabout’s American Airlines Theatre (227 West 42nd St.) and features the original cast of the 2011 Broadway production. The Production is being made available to home viewers for the first time with a new, limited stream offer from May 1 through May 31, 2021. Don’t you dare miss this opportunity, or you’ll have to answer to the Lady herself.

Tickets to view the stream are $15 USD / $18 CAD / £10 GBP per household and are on sale now at latw.org/hd-screenings as well as at theatermania.stream/products/the-importance-of-being-earnest.

Suzanna BowlingMay 2, 2021
Read More
Scroll for more
Tap
What to Watch in The New Year: May 5
Conversations We Need To Have With Bruce Ostler and Kate Bussert on The 2021 Idea Awards and More Part 1