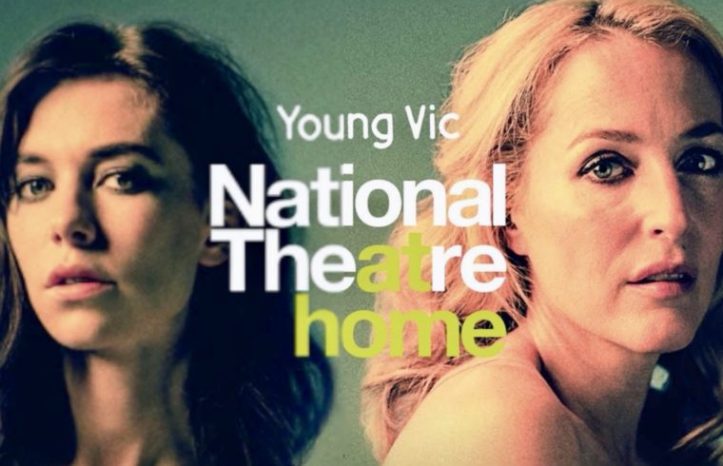 Opening at the Young Vic, London, this revival of Tennessee Williams’ A Streetcar Named Desire landed in the spring of 2016 at St. Ann’s Warehouse. Directed by Benedict Andrews, this stellar production revolves itself around with a sweaty power that is tangible. Starring the phenominal Gillian Anderson, Ben Foster, and Vanessa Kirby, the production garnered incredible acclaim and was recorded by the National Theatre Live to be broadcasted in cinemas around the world. And now, during the COVID-19 lockdown, the dynamic production has been released for free on the National Theatre‘s YouTube channel for one week starting Thursday, May 21st. Click here to watch.

A Streetcar Named Desire is one of those classic American plays that is catnip to actresses all over the globe.  I have seen Cate Blanchett play Blanche at BAM, opposite Joel Edgerton and Robin McLeavy, as well as Jessica Lange in 1992, opposite Alec Baldwin and Amy Madigan; Natasha Richardson in 2005, opposite John C. Reilly and Amy Ryan; and I truly wish I could have seen the original 1947 Broadway production with Jessica Tandy as Blanche DuBois, Marlon Brando as Stanley Kowalski, Kim Hunter as Stella, and Karl Malden as Mitch. That would have been something to see, alas, although I’m old, I’m not that old…Ben Foster and Gillian Anderson.

Something about this current production from the get-go, directed with perfection by Andrews (the 2017 feature film Una), just swings out and knocks us over, much like a Kowalski poker night fight.  The monolithic metal set makes quite a strong statement, unveiling itself and the couple that live in such tight quarters.  It’s an impressive modernistic approach to the play, and in that revolving action, there is truly more tension and structural steam then one could ever have imagined. It gives us so many different angles, sight lines, visual frameworks, like the streamed movie it now is, giving us so many alternate views into that cramped apartment. It makes us feel something like a peeping tom, able to catch such striking and uncomfortable images inside a class play, invading someone’s privacy and intimacy for our curiosity and insight. This is a great piece of work by the set designer Magda Willi, along with the rest of the stellar design team with magnificently modern costumes by Victoria Behr, strong intense lighting changes by Jon Clark, stellar sound by Paul Arditti, and creative alternative music by Alex Baranowski. The loud contemporary music and lighting brings drama and excitement to each moment and scene change. It’s hard like a fist, and cutting like a broken bottle edge. This Pulitzer Prize winning drama (1948) barely gives a moment to breath.

First on stage are the Kowalskis.  Stella, played with a natural yet concentrated attitude by Vanessa Kirby (Princess Margaret in Netflix’s “The Crown“) is moving around the small apartment she shares with her brutish and manly husband, Stanley, portrayed most imposingly by the magnificent Ben Foster (the 2016 film ‘Hell or High Water’). They embody the passion and sexual energy of two charged adolescents, that shiver and shake with animal lust at the sight, sound, and even smell of each other. Like the animal hunter he is, Stanley is first seen coming home from work, bringing his wife a bag of ‘meat’ before running off to the bowling alley with his buddies.  Stella hurriedly runs after him like a giddy school girl in love with a red hot beast. When I first saw the production, I didn’t think Kirby was going to work for me as Stella.  I had that instantaneous feeling that she was too sexy and young-pretty for her role, but I was wrong.  Dead wrong. She brings dynamic new tones to the part that I never have experienced, a young foolish sexuality that almost looks too itchy to inhabit. It’s red hued and dark in the deep lust and desire that makes her blind to his bullying anger and control.

Then in walks Gillian Anderson, struggling in the heat, pulling a large rollie bag on wobbly high heels. Peering over her large sunglasses, Blanche desperately tries to find the right address. She is perplexed, anxious, and confused, all wrapped up in one intense entrance by one amazing actress.  It’s no wonder this part is coveted by so many performers.  It’s an emotional and deeply complex role that gives an actress such a deviating journey to move through from entrance to heart-breaking exit.  I was a bit worried initially that Anderson was moving too quickly into Blanche’s instability, especially after that first walk across the stage and interaction with the neighbor, but once again, I was dead wrong.  She takes a desperate first swig of alcohol and then the stage starts to revolve. Anderson finds her way into the room, taking us through an emotional journey that is epic, devistating, and deeply effecting. It’s an extremely unique and modern take on the role, weaving in layers of sexual addictive energy and anxiety that feel so deeply integral to Blanche, especially during the incredibly uncomfortable interaction with the young newspaper collection boy.  But this energy isn’t just for Blanche, it also resonates within her sister in such a way that it makes their energy even more disturbing.  These two sisters are more alike then we first imagined, and frankly, then I’ve ever seen before, struggling with and losing themselves to their sexual desires and obsessions. It makes one wonder, what happened to these sisters in their family home of Belle Reve to ignite this fire that just won’t go away?Gillian Anderson.

Clocking in at over three and a half hours, the time flies by from our living room as we watch Anderson’s wounded and flailing bird struggle to save herself, but Foster’s Stanley is too brutal of a animal force to be caught in Blanche’s desperation. He’s also too magnetic to ignore. It’s hard to even find the side you want to take in this war.  At times we are drawn into Blanche’s pain, especially the dramatic sad story of the love that seemed to break her apart. That famous monologue destroys, but she’s also too difficult to love and to take. During many of the tense moments, we feel for her sister, Stella, who has no idea how to take care of her or even deal with Blanche’s grandiose facade. The only other one who can save Blanche is Mitch, beautifully played by Corey Johnson (2013 film ‘Captain Phillips‘) balancing the sweet gentle suitor and a sweaty defeated man who is also carrying the weight of brutality and anger inside him, just like Stanley.

The tension and the rise to violence floats in the air over and within that revolving stage, that changes direction and speed as if the anxiety and the alcohol levels fuels the fire around and around.  That is, until the final inevitable collapse of Anderson’s Blanche.  It’s a majestic and heart wrenching performance, and one not to be missed.  We watch her walk out on the arm of the stranger; a gentleman doctor who is to commit her to a mental asylum.  Her disintegration into shattered collapse is complete, but the mystery and deluded fantasy of her grand self still holds tight.The cast of A Streetcar Named Desire streaming on the National TheatreYouTube channel by National Theatre Live.