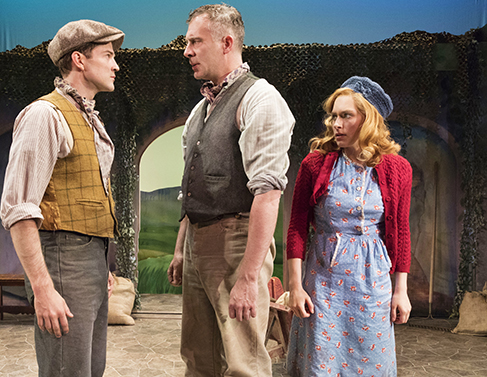 The Suitcase Under the Bed Shows Love in Many Formats

The Suitcase Under the Bed Shows Love in Many Formats

Kicking off The Mint’s season are the lost plays of Irish writer Teresa Deevy. The title refers to where these plays were found. Deevy, who became deaf at the age of 20, had six plays produced by the Abbey Theatre in the ‘30s. After Deevy stopped writing for The Abbey, she concentrated on radio. I can see how the four short plays could have been present in that format.

Well directed by Jonathan Bank with a stellar cast that consists of Ellen Adair, Gina Costigan, Sarah Nicole Deaver, Cynthia Mace, Aidan Redmond, Colin Ryan and A.J. Shively, this was a night of nostalgia and days gone by. 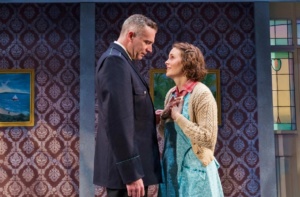 Aidan Redmond, Ellen Adair Photo by – Richard TermineThe first of the four, Strange Birth, was also the best. We are introduced to Sara Meade (Ellen Adair) who works at a small rooming house. Each of the residents has a form of heartache. Mrs. Taylor (Cynthia Mace) waits for her son, who has gone off to war. Mr. Bassett’s (A.J. Shively) love has spurned him and Mrs. Stims’ (Gina Costigan) left. Sara is determined to not fall in love until the mailman (Aidan Redmond) brings a letter and a determination that changes her mind. 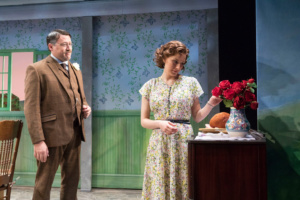 The second play, In the Cellar of My Friend, Belle Dobbyn (Sarah Nicole Deaver) arrives to see who she thinks is her intended and childhood love, Barney (Shively). When she arrives, she and Patricia Keane (Mace) learn that Barney is leaving. His father, the barrister Thomas Keane (Colin Ryan), is in love with Belle and has proposed to her, which she has said no to and that she loves his son. That is when she is told the news. The gardener, Martin (Redmond), tries to shed some light, but Barney who has never lived up to his father’s expectations has ideas of his own, that break Belle and send her into his father’s arms. 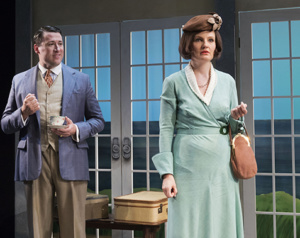 The third play, Holiday House, shows how hasty decisions have long lasting effects. Hetty’s (Deaver) mother (Mace) has opened her summer house and invited two brothers to stay. Derek Mackey (Ryan) with his wife Jil (Costigan) and Neil Mackey (Redmond) with his wife Doris (Adair). However, Derek and Doris were once lovers. Do old relationships ever die? 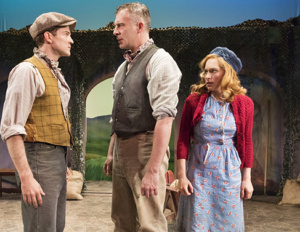 The final play, The King of Spain’s Daughter, previously staged at the Abbey in 1935, tells the story of Annie (Deaver), a working-class girl who longs for more. She flirts, tells tall tales, and does anything to forget who she is. Her father is abusive (Redmond) and hates the dreamer Annie is. His co-worker, Jim Harris (Shively), longs to wed her. Mrs. Marks (Mace) does not want to see Jim involved with Annie, thinking her to not be good enough. Her father, being sick of her, gives her the choice of marrying Jim or going to work in a factory, neither of which appeal to this girl who longs to fly free.

I have long been a fan of A.J. Shively’s work and this just enforced it. It was nice to discover Ellen Adair, Gina Costigan, Sarah Nicole Deaver, Cynthia Mace, Aidan Redmond and Colin Ryan’s work.

Ms. Deevy’s work is prolific if not past its time. It was a nice visit, and for her time Ms. Deevy is to be admired, especially as she wrote without being able to hear. I am so appreciative of The Mint for their well-done productions with sets by Vicki R. Davis that always impress. I love to go back and see what has shaped our world in a time when life was much simpler.

The Suitcase Under the Bed: The Mint Theatre, The Beckett Theatre, 410 West 42nd St. Until Sept. 30th.

RossNovember 16, 2022
Read More
Scroll for more
Tap
Could David Scala Be the Next Great American Playwright with Among the Furies?
Broadway in Chicago’s Summer Concert – A Perfect 10