In a season where plays are mediocre and musicals hop off movie or TV screens, it was a refreshing and an exuberant night at the  theatre, as I went to review Frances Ruffelle LIVEs in New York. This is seriously the best show I have seen all season, bar none! More than a cabaret, Ms. Ruffelle turns each song into a playlet and then the playlet becomes a bigger piece thanks to Ms. Ruffelle and her co-creator Gwyneth Herbert. They say it takes a village, well kudos also goes to musical director Jude Obermuller and David Barber for additional arrangements. Using almost a beat box version of prose to narrate we have been dropped off into a almost Ron McKuen trance. 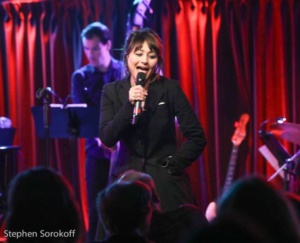 Not much has changed from this gamine girl, now women of Les Miserables fame of 31 years ago. “L’un vers l’autre”, was the first song Ms. Ruffelle heard from the team of Les Miserables, but the song never made it into the show. Outwardly elfin, with a smoky texture to her voice, there is a joyous 60’s vibe with “Un Home Et One Femm” the theme song from the film A Man and a Woman. Complete with flower petals and da da da dadada, we are entranced. 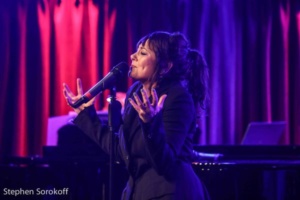 A Judy Garland mash-up of “Paris is a Lonely Town”and “Lonely Night in Paris”, is when the concert starts to really be a play about her life or a women’s journey through life. 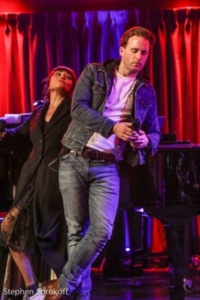 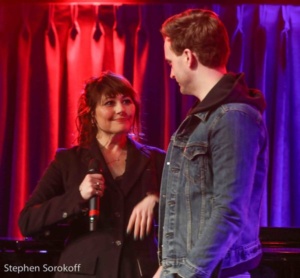 “La Foule” becomes a tango, as Ms. Ruffelle seduces and sheds her clothing. No worries, there are several outfits hidden underneath her fashionable trench coat.

“This Is What It Is” and “Hymne L’Amour” are her tributes to Michael LaChiusa’s The Wild Party and Piaf! Both shows she performed to rave reviews in the West End and it is easy to see why.

“Like Yesterday” Blair Mackichan song, reminded me of Patti Smith in her hey day. This has just been recorded for a new E.P. and I highly recommended it. 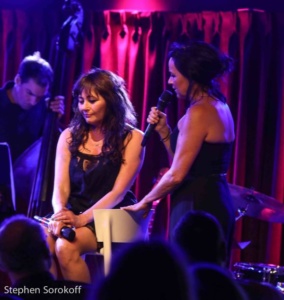 With a second guest star Sally Ann Triplett, “Little Girl Blue” and “Best Friend” from Michael LaChiusa’s The Wild Party, showed a camaraderie that was infectious. 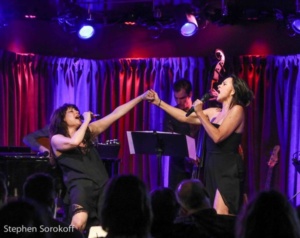 “A Quoi Ca Sert (Take the Mercedes Benz)” had Ms. Raffelle touring the whole room. There was not one seat that did not get an up close and personal view of this lithe and highly personable performer. 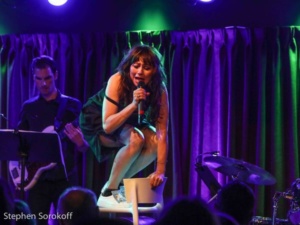 “Gotta Move” had Ms. Ruffelle doing almost a cowboy sex kitten act, which was highly entertaining. For that matter the whole show is.

“Lilac Wine” was an intimate portrayal of laying ones soul bare.

“It’s Alright With Me” was done slow with secrets to tell, was a fabulous arrangement interpreted by a master. 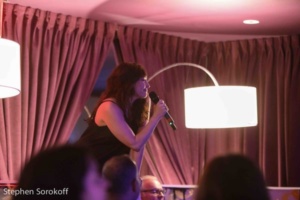 “Can I Go All The Way With You” and “I Say Yeh-Yeh” had the singer joined by Craig Bierko. It is clear the two are lovers, as their chemistry sparks off the stage and is combustuous.

“Je Ne Regreet Rein” ended the show, but what happened next, actually made me tear up. Going through the audience Ms. Ruffelle again sang “On My Own,” making individuals sing on mike. Their reactions of overwhelming joy to meet up close and personal someone they have admired, showed all over their faces. Adorably Ms. Ruffelle selfie the experiences.

This show was so remarkable and superbly well done. Talented was in abundance, but more than that this show made you love life. Kudos to Tim Basom on guitar, Dustin Kaufman on drums, Sam Zerna on bass and Steven Wenslawski on accordion. These musicians added to the flare of the show.

I have never been a fan of songs in other languages, not that they aren’t beautiful. What was so amazing here, is I never felt like I didn’t understand the intent of the lyric. The context was so strong, I felt like I had taken a journey almost akin to a travel log, but of somebody’s life and one I wanted to know.

By the way if you haven’t been to The Green Room 42, go. The set, spacious seating, the no food or drink minimum, cover charges that won’t break the bank and the superb sound and lighting are unsurpassed. By the way the lighting for this show, which was superb was done by Daniel the manager of The Green Room 42.

As for food, I highly recommend the Mezza, hummus, tahini, sauteed tomatoes, charred eggplant, labaneh, pickles and za’atar pita ($16). Definitely share, because it is generous.

“Frances Ruffelle LIVEs in New York” will be performed at The Green Room 42 (570 Tenth Avenue at 42nd Street, on the 4th Floor of Yotel) on Thursday, March 24 at 7:30 PM. The cover charge is $30 with $75 premium tickets (which include a signed poster and CD, meet & greet and preferred seating). There is no food or drink minimum. For tickets, please visit www.TheGreenRoom42.com.

Make sure you get tickets, because this is a show not to be missed.