The Talented John Lithgow Can’t Save Stories By Heart

The Talented John Lithgow Can’t Save Stories By Heart

“Arthur Lithgow’s children always had a much higher opinion of their father than he did of himself.” 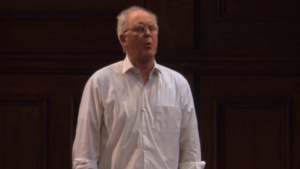 There is no doubt that John Lithgow is a talented, charismatic actor who can dominate a stage, even a Broadway one by himself.  This multi-award-winning actor has won accolades for his TV work in 3rd Rock From The Sun, Dexter and most recently The Crown. He has won Tony and Drama Desk awards for his work in Sweet Smell of Success, Requiem of a Heavyweight and The Changing Room. He was nominated for his work in The Columnist, Dirty Rotten Schoudrals, Mrs. Farnsworth and M. Butterfly. 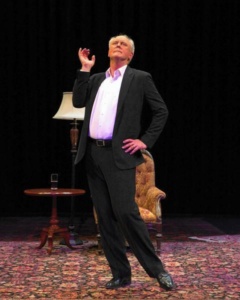 In his one man show Stories By Heart, Lithgow is not only acting, but has written this semi autobiographical piece. From the moment he steps out on stage, he has a has a warm and commanding presence that engulfs you. The set is simple, a large wooden room with an arm chair, stool, small table and chair. It is from here Lithgow draws us into his childhood asking “Why do all of us want to hear stories? Why do some of us want to tell them? Why, for that matter, are all of you even here tonight, staring at me for two hours, listening to me talk, talk, talk?”

The show is a remembrance of his father Arthur Lithgow, who passed away in 2004. Arthur taught and produced Shakespeare plays like Titus Andronicus. “That’s the one where the queen is tricked into eating meat pies made out of her own two dead sons.” Lithgow saw this play when he was eight. His family was eccentric and his childhood, filled with his father reading from a book called Tellers of Tales. This 80 years old, 1,500 pages book contained 100 classic short stories, selected by W. Somerset Maugham. This book appears on stage, as the one and only prop. Inside its beloved pages are stories by Edgar Allan Poe, Arthur Conan Doyle, Jack London, Ernest Hemingway, F. Scott Fitzgerald, and “Colette, for God’s sake.” It is in hearing the memory sense part of the play, that this show excels. 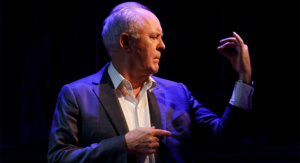 We are treated to two of the stores in the book. The first is Ring Lardner’s “Haircut”. This story of small town American life, is a gruesome tale of adultery, misogyny, and murder. As you are hearing this story, you are struck with the why’s of it. Nobody in this story is likable, therefore who wants to hear it?  I watched as much of the audience took a nap.

Another problem with this piece, is during the story Lithgow as the barber is shaving and cutting a customer, yet the district lines of the customer are never drawn. I had not a clue of who was in that chair and for that I blame director Daniel Sullivan.

Act 2 finds us in the throws of “Uncle Fred Flits By,” by P.G. Wodehouse.  Much funnier, but again few people in this story have a moral clause. In both of these stories, the humans are into using others for their own mirth. I don’t find this funny, nor is it something I want to watch. Lithgow makes all of these characters come alive, but the problem for me and it seems a lot of the people I was sitting near, is we didn’t want to see them.

I understand that Lithgow wanted to pay tribute to his dad, but why are we here? The stories are masterfully told, but going back to Lithgow’s first question “Why do all of us want to hear stories?”, the reason is to learn, to become emotionally connected and to be entertained, and I was none of these. I am a huge Lithgow fan, but I would rather see him take on a character and dig deep into their recesses like Winston Churchill in The Crown, than tell stories that hurt my heart.