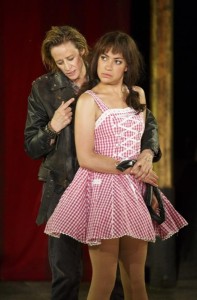 I do not like politics, especially in this race because there are NO winners. The country will lose, no matter who wins. I also hate when overly ambitious directors think it is ok to screw with an authors text, especially when the author is dead, because this does not happen when they are alive. Look at what happened to The Mountaintop when they tried to do it a Kent State. In Phyllida Lloyd’s all-female production of The Taming of the Shrew, at the Delacorte Theatre is an all out Trump hate feast and not the play. 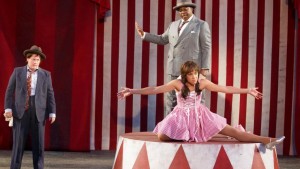 The only reasons to see this production is for the fabulous Janet McTeer who makes Petruchio a swaggering, crotch grabbing, peeing, barfing, farting, strutting man, watchable and the wonderful Donna Lynne Champlin, playing multiple roles. The usually layered Cush Jumbo makes, Katherina s screaming one note annoyance and I blame this on the direction.

In this production women mock men and especially Trump, as the show begins and ends with a Miss Padua beauty Pageant, emceed by an unseen Donald Trump. We become entrapped for two hours with no intermission, onto a three ring, ok 2 trailers and a ring carnival, where Pat Benatar, Rod Stewart and Elvis Presley’s music blur the time frame. The costumes consist of hideous red prom gowns, overtly tight baby-doll dresses, business suits and or muscle shirts. We have Mark Thompson to thank for the tacky visuals, as he did the sets and the costumes.

Part of the plot remains intact youngest daughter Bianca (Gayle Rankin), can not get married until her sister Katarina (Ms Jumbo), ties the knot, declares their father Baptista (LaTanya Richardson Jackson). However Kate does not want to marry and her temper scares off all potential suitors until Petruchio arrives from Verona. His only requirement is a hefty dowry. Petruchio has all confidence in the world he can tame this hell cat. He does so by starvation, sleep deprivation and humiliation. In the end Kate is tamed and teaches other women how to be subservient. However in this production once she does Bianca wins the pageant, lines are cut to keep this play politically correct.

When a stage prop gets stuck Judy Gold, as Premio comments as “Trump” again about the indignity of serving a female director and God forbid a female president.

In the end the song “Bad Reputation,” from the 1999 cult flick “10 Things I Hate About You,” a modernized version of Shrew invades the stage as the actors awkwardly dance in ecstasy.

Just because you have an agenda and New York is as liberal as it comes, does not mean you have the right to make a dead playwrights intentions your own. Fine if you say a show is based on someone else’s work and then re-do it, but to change the intent of the play is just wrong and does not honor the writer. I guess it is only ok if the playwright is alive and can pitch a fit.

The Taming of the Shrew: The Delacorte Theatre, Central Park and June 26th

Suzanna BowlingMay 24, 2022
Read More
Scroll for more
Tap
The Art of Falling – A Fantastic Fusion of Comedy and Dance
Skeleton Crew Speaks From The Heart