The Tank presents BrandoCapote Intriguing my Mind, but not Satisfying my Soul 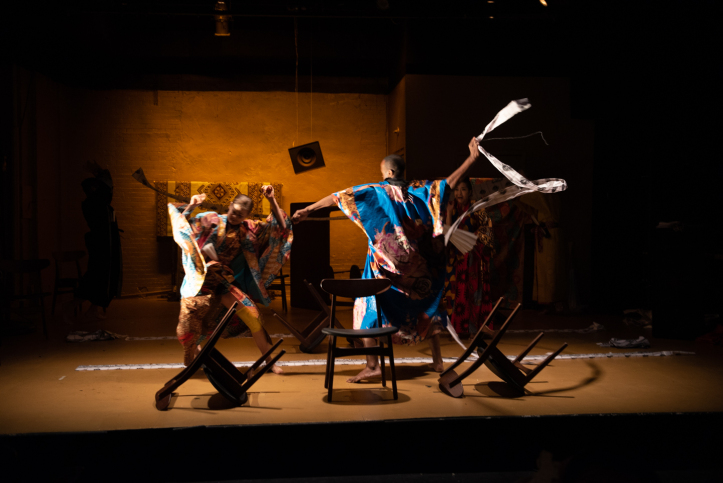 The Tank presents BrandoCapote Intriguing my Mind, but not Satisfying my Soul

I saw their CasablancaBox a few years back, and I thought it oozed “with classic movie magic charm” making me curious about their new cinematic/theatrical conglomeration/production, BrandoCapote at The Tank, in association with Foxy Films. As with all of those old and famous classic films, CasablancaBox, as created by the same team of writer Sara Farrington and director Reid Farrington, had the vision and the style to incite those warm nostalgic feelings that typically flood our senses when we watch those black and white romantic dramas from the 1940’s and even though I stated within my review back then that we needed a better ‘Why?’ to match the incredible ‘Wow’ of the production, I was optimistically hoping some of that same charm and inventiveness would filter into their study of Marlon Brando, and the infamous interview with Truman Capote and make something truly inspirational. I wasn’t wrong, particularly about the inventiveness, but the production itself is still not all that right either. Be warned though, I’m going to be repeatedly using the word ‘repetitious‘, purposefully, so you can experience the repetition literally, as we did that night at the theatre.

I will readily admit that when I walked into the theatre that night, I knew very little about the cinematic celebratory history, particularly Brando’s twisted childhood and his tragic role as dysfunctional father to his two children, robustly portrayed with a twitchy force by Laura K. Nicoll (Kraine Theater’s This Time) as Cheyenne, or The Daughter (as the program likes to notate), and Cooper Howell (NYMF’s Emojiland – The Musical) as Christian, or The Son. The true life murderous tale that entwined these two siblings was told to me by my theater companion just minutes before the lights dimmed, and I’m thankful for that bit of cinematic crime history. And I knew nothing about the convoluted relationship Brando had with the railing wannabe actress, Dodie, or the Mother, portrayed with a testy jealousy by Lynn R. Guerra (CST’s Her Aching Heart). It was all news to me that night, and although the piece gives us its demented all trying to flesh out the crazy dynamics with repetitious bravado, filling and repeating the unveiling with determined grit, it only left me wanting to learn more on my own, rather than feeling I had been given a unique insight unrolled before me. Time and time again, with those rolls of printed fabric, that reminded me of either film stock or toilet paper, or both, fabricated to use continuously throughout BrandoCapote. Why? I’m not sure.

But it all starts out, after a barrage of film clips against a colorful rainbow-esque flag, in 1957 at the height of Brando’s movie star fame. Truman Capote is interviewing the star in his room at The Miyako Hotel, Kyoto, Japan while he’s on location shooting the film ‘Sayonara‘. True Story. The twisted exploration lasts an insane seven hours, although luckily the play is a quick 70 minutes, but it gave the famous actor plenty of opportunity to ramble on about his messed up life, mimicry vs. acting, and being a movie star. “I suppose you think I’m a genius” he says, repeatedly to make the Farrington point, but for the most part, all I wanted to ask was “what the hell is going on here?” I don’t know much about the success of his performance in that film, or the film in general, but it feels, from the repetitive vocal impressions performed on tape by Sara Farrington and Akiyo Komatsu, each giving us very different qualities to the strange and unique delivery of Capote, that the revealing profile was something quite out of this world, and infamously spectacular. Published on November 9th, 1957 in The New Yorker, the piece exploded, and the Farringtons found within the dynamics and central ingredient to the bizarre BrandoCapote.

With the edgy energy of an over-enthusiastic editor, snippets of film stock are projected with a wild reactive force onto Japanese props fanned out with precision by the focused actors. They have taken the prerecorded interaction along with similarly themed film clips and inserted them within their magically twisted ideology, compiling and layering through repetition into something quite fantastically, but hard to wrap one’s head around or make sense of in the long run. Chronicling Brando’s performances from a long list of iconic films, such as ‘On the Waterfront‘, ‘Julius Caesar‘, ‘The Godfather‘, “Last Tango in Paris‘, ‘Superman‘ and of course, the legendary, ‘A Streetcar Named Desire‘, BrandoCapote plays them into the familial themes of the moment and the phrase. They leave me wanting to know more, see more, and understand more, although it’s also apparent that the clarity will have to come later. Not from within this piece of avant-garde theatre, but through our own research and reading.

The hotel room where the interview takes place morphs in this alternative universe. It is  Purgatory, in a sense, organized as a space to dissect and roll out the cinematic years of 1957 through 2004. Centered around Brando, dynamically portrayed by the game and determined Rafael Jordan (‘Alligator Alley‘), he flails and nervously vibrates to the static energy of the sound design created by Marcelo Añez, against a stark backdrop of kimonos, courtesy of costume designer Andre Joyner. Capote is formulated to be something akin to the Devil, archly portrayed by Jennifer McClinton (Will Dundon’s ‘Missing‘), who plays the multi-layered variations with clear cigarette-holding ambition. It’s a clever and well sculptured characterization, but doesn’t yield the intended results. The game plan of the Farringtons, along with the haphazard choreography by Laura K. Nicoll, fails to unearth a cohesive deconstruction, and against the flat lighting by Laura Mroczkowski, the vibrations and restarts fail to crack into the emotional intensity of the compelling story.

BrandoCapote, in the best possible light, is an explosive configuration of a tormented persona and his extreme masculine representations that corrupted any possibility of normality for this sad man and his extended family. At its worse, is a muddled mess of non-coherent constructs that add up to little more than mental and theatrical gymnastics trying to pass itself off as high conceptual art. All presented from an unraveling vantage point of the twistedly flamboyant Capote, and heightened to absurdity by the Farrington team of creationists. It unravels much like the better CasablancaBox, where a better ‘Why?’ is needed to give us reason to stay tuned in.