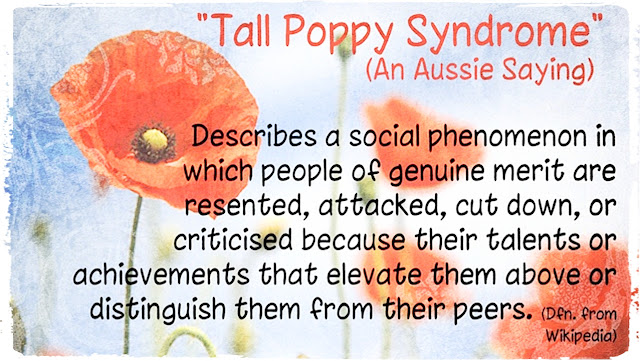 Yesterday, I talked about how American cities are being torn down by the inside. If I thought this yesterday, I am sure about it today.

In Australia and New Zealand, there is what is known as “The Tall Poppy Syndrome.” In this cultural phenomena poppies are all known to grow at the same height. When a rouge poppy grows taller than the other poppies in the field, the other poppies strangle the rouge poppy with their roots. In this syndrome with people, if somebody is perceived to be more accomplished the mob mentality criticizes, sabotages and brings these accomplished individual to want to retreat to other countries, where they are allowed to flourish.

In America this syndrome is in the reverse. Those who refuse too conform to mediocrity and follow the dictated norm, no matter how illegal or wrong, the people in power go after them with a flourish. They are maligned, politically and financially destroyed. The people that they care about are threatened and they are broken and left trapped into a situation they have no idea how to get out. They came into the situation with hope wanting to help and by the end they quit and are left disillusioned.

This is neither a Republican or Democratic problem, but a universal dilemma.

How the opposition works is they take a partial truth and then use it against them. The constituents who are trusting those in power believe the half truths, don’t usually follow up. I did but the results left me depressed and feeling the hopelessness of this country.

This is happening to every city across America.

There, are always two sides to a story.

Suzanna BowlingOctober 9, 2021
Read More
Scroll for more
Tap
The Tearing Down Of America, How It Is Done.
The Manipulation of America: The Haitian Crises