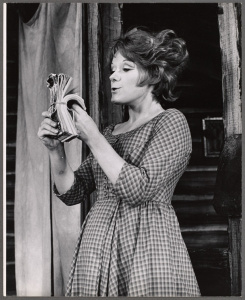 In The Unsinkable Molly Brown

Tammy Grimes was known for singing “I Ain’t Down Yet,” but on Sunday in Englewood, N.J. she was silenced. At the age of 82 we are left with the memories upheld on Youtube. 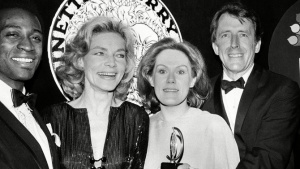 Born in Lynn, Mass., on Jan. 30, 1934, Tammy Lee Grimes graduated from Stephens College because of its drama program. Her first job acting was at the Westport Country Playhouse as she studied acting at the Neighborhood Playhouse. Playwright Anita Loos saw her in a student presentation and chose her for the title role in The Amazing Adele. Though the show closed out-of-town tryouts Ms. Grimes was signed to The Littlest Revue Off Broadway along with Joel Grey. Noel Coward saw her performing at the Manhattan nightclub Downstairs at the Upstairs and cast her as the lead in Look After Lulu. Ms. Grimes also worked at the Stratford Festival in Ontario, where she and her first husband, Christopher Plummer, starred together in Henry IV, Part I. ” Tammy, was a shinning star on Broadway at 26, winning a Tony Award for her performance in The Unsinkable Molly Brown. Unknown when cast as Molly, her name was not above the title, which meant because of the Tony regulations at the time she could be nominated only in the featured-actress category. Ms. Grimes went on to star in Marc Blitzstein’s The Cradle Will Rock and in 1964 she appeared in High Spirits,” a musical version of Coward’s Blithe Spirit directed by Coward. Ms. Grimes won a second Tony, for a 1969 revival of Noël Coward’s Private Lives, this time she won a Tony in the best actress category. 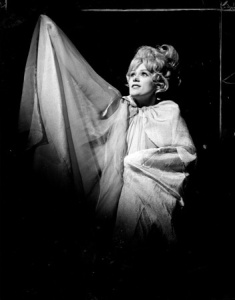 Moving to Hollywood, Ms. Grimes appeared on several TV shows including the short lived “Tammy Grimes Show.” She went on to make several films, including  “The Last Unicorn” and “Slaves of New York,” but was passed over for the film version of “Molly Brown” for Debbie Reynolds, who had a more traditional Hollywood look and sound. Her last role on film was as Ally Sheedy’s Old World mother in “High Art.”

she returned to the stage in Neil Simon’s California Suite and Tartuffe ( earning a Tony nom.) and Turgenev’s “A Month in the Country” with also starred her daughter, Amanda Plummer. She even was in the original production of 42nd Street. Her final Broadway appearance was in a revival of Tennessee Williams’s Orpheus Descending starring Vanessa Redgrave and Off Broadway as part of the rotating cast of 24 Evenings of Wit and Wisdom. 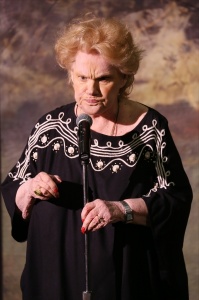 She had a terrible-tempered, but her talent was always bluntly worth the reputation. 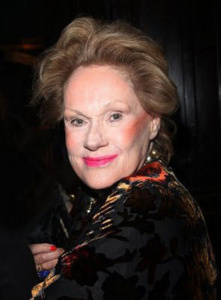 Ms. Grimes married Jeremy Slate, a television actor divorcing a year later. She was with her third husband, the musician and composer Richard Bell, until his death. Ms. Grimes is survived by her brother, Nick, and her daughter.

Suzanna BowlingDecember 10, 2021
Read More
Scroll for more
Tap
Not That Jewish Is The Perfect Hanukkah Gift of Laughter
What’s Better Than One Heidi Klum…Five!