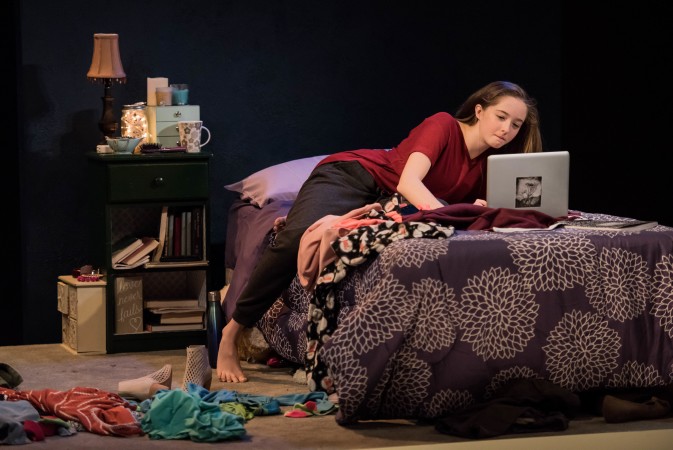 The Thing With Feathers or Obsession

The Thing With Feathers or Obsession 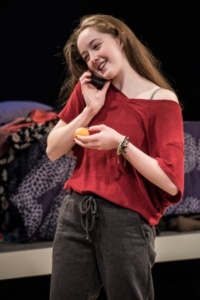 Obsession, relationships with a 12-year age gap, overstepping societal boundaries, revenge and more all are the subject of Scott Organ ‘s topical new play The Thing With Feathers, at the Barrow Group. This is one of the more interesting plays to hit this season and it is sure to stir emotions. 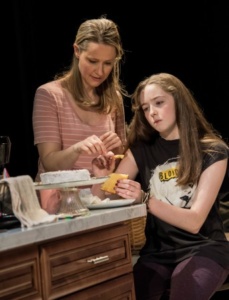 We follow Anna (Alexa Shae Niziak) who is 16 about to be 17. Anna lives with her single mom, Beth (DeAnna Lenhart). Her dad walked a long time ago. Anna has been spending time on the internet with Eric (Zachary Booth), a 21-year-old college student…or so she thinks. They discuss poetry and life and have developed a friendship. 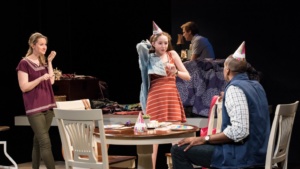 Beth’s boyfriend Tim (a dependable-feeling Robert Manning Jr.) a cop, has proposed marriage and Beth has said yes, with her daughter’s blessing. On Anna’s 17th birthday, Eric shows up at her house unannounced. Turns out he’s not 21, but 28 and what seems like a older person stalking a younger more venerable person is much more complicated. The past has come back to haunt and emotionally torture. 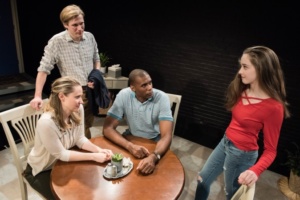 Alexa Shae Niziak is a wonderful young actress, who has a long career in front of her. This “old shoe” (“old soul”) is much more wise and beyond her years. It is not surprising that this innocent is the one that falls the hardest. DeAnna Lenhar, as Beth, plays mom, but really treats her daughter as she puts it as her “best friend”. It is easy to see how this situation gets so out of hand as secrets keep getting revealed. Robert Manning Jr. is perfect as the man out of the loop, but wanting to make everything all right. It is Zachary Booth’s performance that is the most unnerving. He is more like a romantic lead, than a creepy deeply disturbed person who can not let go of the past despite it being 12 years ago. 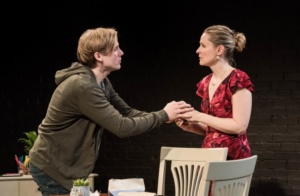 Seth Barrish’s direction seems a little slow. At times it is hard to believe this story due to the casting and other facts that turn out to be true, but only after some research. Turns out the statute of limitations is only for this state, so it would make more sense to have Eric younger by a few years, so you don’t feel like the playwright got his facts wrong. 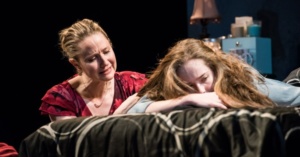 Edward T. Morris’s two tiered set allows us to view this at a distance with Solomon Weisbard’s lighting keeping things just that little bit off kilter. The sound designer by Matt Otto helps with the transitions

The Thing With Feathers will draw you in and will make you think. The turn of events will keep you guessing as to what is really is going on, keeping your interest. Though I would like to hear more on the why’s, I recommend this as a show to see.

Robert MassimiSeptember 13, 2021
Read More
Scroll for more
Tap
Miles For Mary Is Stuck In The Past
Bringing The Music of The 90’s Back Cruel Intentions: The Musical