The Total Bent: Seduced by The Music

The Total Bent: Seduced by The Music 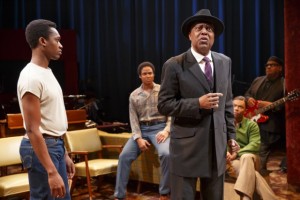 The Total Bent has amazing performances that astound, music that entices you and make you want to groove. The beat is infectious, however racially bigoted with lyrics like “That’s Why’s He’s Jesus and You’re Not, Whitey.” It is also religiously blasphemous. The text and lyrics penned by the musician Stew who wrote and stared in 2008’s Tony Award winning Passing Strange, will leave you scratching your head. Yet the music by Stew and Heidi Rodewald, would have you wanting to buy the CD and seeing this show again. I guess this is how the devil allures you over to his side.

In the Deep South we meet Papa Joe Roy (Vondie Curtis Hall), a charismatic TV preacher with mystic powers in a recording studio. His brilliant composer and flamboyantly gay son Marty (Ato Blankson-Wood) is just as talented. His father sees his son’s bigotry and complains of the mention of the word “Whitey” eleven times. “Twelve, one for every apostle,” Marty corrects him, yet he still steals his sons writing credits. Papa has issues with his son’s orientation and when he refuses to sing about protest the relationship breaks down. 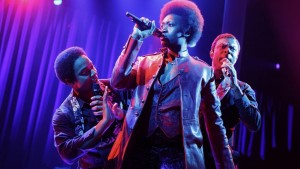 Marty turns two thieves (Jahi Kearse and Curtis Wiley) sneaking into the recording studio into his backup singers and dancers and begins to recording. When Byron Blackwell (David Cale), a white, British music producer who is enamored of black music recognizes Marty’s star potential, he turns him into a James Brown type of Gospel singer preaching and gyrating all over the stage. In the end the story falls completely apart, the show turns into a rock concert and Marty ends up in jail. Why we don’t know as the show ends and we know we have witnessed something that has transcended but again why we don’t know.

Hall, who was in the original Broadway production of Dreamgirls, is still as charismatic with a luminescent presence and arousing purr to his performance. Kearse and Wiley make back-up singing high voltage. Cale adds a needed comedic relief. I would love to see him play the engineer in Miss Saigon. Blankson-Wood, is a star on the rise and this is the witnessing of his orbit.

Stew and Rodewald are brilliantly talented composers whose score tells the story of rock, funk, blues, jazz, gospel, hip-hop and all styles in between.

Joanna Settle, direction keeps the show moving, brings out phenomenal performances but does not flesh out the shows story or meaning. It takes a village to build a show and Stew and Settle fail at telling a story that doesn’t leave the audience confused.

The intoxicating score played by a superb seven-piece onstage band includes Stew and Rodewald and is the reason you will walk out of this show wanting to see it again and again. It is intoxicating and will draw you back despite the flaws in its structure.