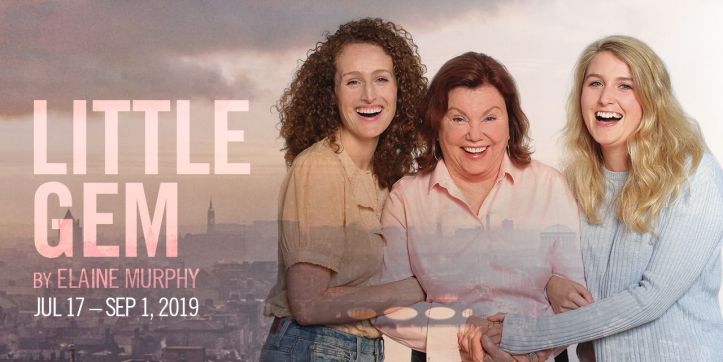 It is really about four time Academy Award nominee and two time Golden Glove Award winner, Marsha Mason (“The Goodbye Girl“, Broadway’s Steel Magnolias) that drew me to the Irish Repertory Theatre on a lovely summer’s eve in July. I had never heard of Elaine Murphy’s debut play, Little Gem which premiered at the Dublin Fringe Festival in 2008, but was eager to see what that Irish woman’s voice had in store for me. She has created with clarity a series of three overlapping monologues that slowly wind themselves together into a whole. It’s perfect in its Irish-ness, filled to the brim with funny whip smart asides and sexual frankness that when delivered with that accent rings true and charming, even in its drunken bold honesty.

Lorraine, portrayed strongly by Brenda Meaney (RTC’s Indian Ink), delivers the middle ground with heart breaking clarity, weaving her tale that entangles us in her need. Amber, cheekily played by Lauren O’Leary (Other Room’s The Awkward Years), the young generational beacon is a bit too physically clumsy in her precociousness but delivers the edgy youthful story with force and rebellious and garish glee. Her movements seem abrupt and distracting at odd moments, ratcheting the energy around from sweet to stormy, but I’ll lay that one on the vision and instructions of director Marc Atkinson Borrull (Gate Theatre’s Beginning) who leads these three forward in a somewhat awkward nonsensical universe. If he had just had more belief in the story and the three actors, the piece might have delivered the story of love, grief, confusion, and deliverance with a stronger deeper connection, but he shifts and moves the three around an antiseptic waiting room set that never fully explains itself. Designed with an exacting attention to detail by Meredith Ries (Rattlestick’s No One Is Forgotten), the space never illuminates, only clumsily gets in the actors way, barring them from expanding our imagination by being too clearly positioned in a specificity that has no purpose beyond the most oblique. With spotty lighting by Michael O’Connor (59E59’s Hal and Bee), straight forward but overly layered costuming by Christopher Metzger (Wheelhouse’s Enemy of  the People), and a solid clear sound design by Ryan Rumery (RTC’s Apologia), the story unfolds despite the unneeded obstacles. It’s a simple story, told from the heart, and all that structuring is merely distracting from Mason’s beautiful nuanced storytelling at the center. She has this innate ability to give layers of perspective and humor to this grandmotherly tale with an added edge of honest youthful vision and emotionality. The two others sharing the stage and their story do a good job remaining relatively connected to her core. All three do a grand job, working overtime and not complaining, but it’s Mason who pulls us to the end, cradling us in her outstretched arms.. If only we didn’t have to try try so hard to ignore that mess surrounding her and her two costars.