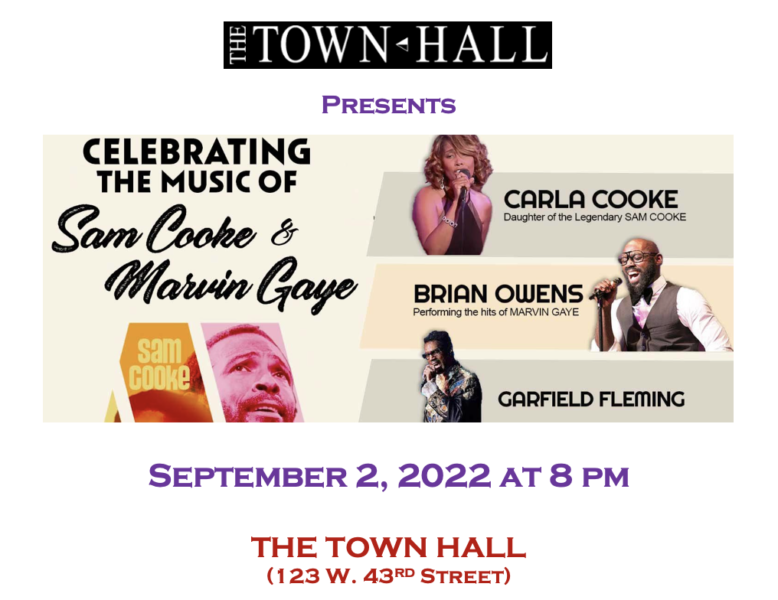 The Town Hall (www.thetownhall.org) presents Celebrating the Music of Sam Cooke and Marvin Gaye on September 2 at 8pm. This evening of song features Carla Cooke, Sam’s daughter; Garfield Fleming, who toured with the Delfonics and William Hart for more than 25 years; and Brian Owens, who’s rendition of Sam Cooke’s A Change is Gonna Come has 81 million views on Youtube.

Carla Cooke is the youngest daughter of the legendary Sam Cooke, and her future mirrors the image of her father, having crafted her sound in church. Carla has become her own person but still connects with her roots through her father’s music. Her father, her Godfather, Sir Mac Rice (writer of “Cheaper to Keep Her” and “Mustang Sally”) and her Uncle, recording artist LC Cooke are her inspirations, and they motivate the journey that she is on as an Artist. Carla Cooke’s style is diverse in Gospel, Christian, R&B, Soul, Pop, and the contemporary sound that emanates though the culture of today.
Recently, Carla recorded two duets on legendary Blues artist Joe Louis Walker’s new compilation.
Garfield Fleming was present at the birth of Philadelphia soul, a genre that includes soul legends Patti LaBelle, the O’Jays, Harold Melvin & the Blue Notes, and the Delfonics—a band he would later tour with. Developing his own sound as a solo artist, Garfield released his signature song, “Please Don’t Send Me Away,” a nightclub staple in the early ‘80s that also established him as an artist in the U.K. and France. A Youtube video of “Please Don’t Send Me Away,” taken at a 2018 street performance at a Paris flea market went viral, garnering Garfield over 20 million views.
Garfield spent the remainder of the ‘80s putting together a successful solo career, releasing another hit single, “Let’s Turn in Early” in 1984. As a solo artist, he has opened for some of the biggest stars in Soul, including Harold Melvin & the Blue Notes, The Isley Brothers, and the great Jerry Butler. In the early 1990s, the Grammy Award-winning Delfonics asked Garfield to join them to be their baritone and background singer. He would end up touring with them for the next 25 years.
After the Delfonics stopped touring, Garfield resumed his solo career, releasing a new album in 2017, issued in the U.S. under the title “Time to Know Me” and in the U.K. under the title “Garfield Fleming.”
Brian Owens has headlined his own tours across the country and has performed at the World Series and for First Lady Michelle Obama. Owens opened for Ramsey Lewis and Michael McDonald and has made numerous appearances on television, including  Entertainment Tonight, The Ellen DeGeneres Show, Fox & Friends, The Wayne Brady Show and more. Brian’s rendition of Sam Cooke’s A Change is Gonna Come has 81 million views on Youtube.
Tickets for Celebrating the Music of Sam Cooke and Marvin Gaye, ranging from $47 – $67, are available at thetownhall.org or on ticketmaster.com.
Related ItemsCarla CookeDelfonicsGarfield FlemingMarvin GayeNewSam CookeThe Town Hall
Entertainment