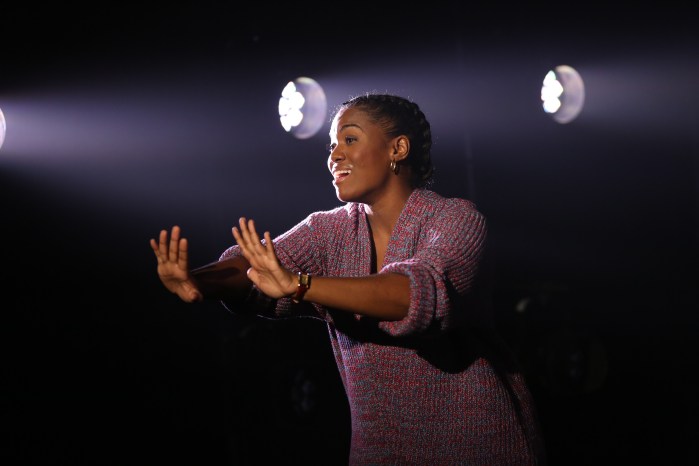 With two ornery old white women invisible in the background showing off their black belts in berating, Transport Group, in association with The Public Theater, streams expertly into view the engagingly emotional two-handed musical, Broadbend, Arkansas that I feel so fortunate to have had the opportunity to see last fall. It’s a delicately entwined historical journey that spans generations of pain, love, turmoil, and defiance, all through the cracked lens of American racial inequality, the Civic Rights movement, racially motivated violence, police brutality, and the epic rally cry of the Freedom Riders of 1961. It was powerful and emotionally relevant back in the fall of 2019 when I saw this production at The Duke on 42nd Street, but now, with all that is happening in the United States of America, the gripping pain that hits hard about an hour in is tripled and delivered with what seems an even more sure-footed stance.

With beautifully crafted music and some additional lyrics by Ted Shen (A Second Chance), the dynamic libretto, split into two parts between Ellen Fitzhugh (“Just One Q“) and Harrison David Rivers (“Ruby“), flows forward effortlessly with such grace and radiance, it’s impossible not to get swept up in the movement and the lovingly personal engagements. The piece feels so intimate and personal, done with some of the most exquisite voices heard on stage. Accompanied by their solid acting choices, the two drive their way through this crucial crossroads of history into a sadly heartbreaking foregone conclusion that is as exacting as can be. It couldn’t be more emotionally taxing and timely, steeped in generational love and care, stitched in humanity and determination, and furthering the much needed conversation that is being protested against on the streets of America as I write this. And the same racist violent pushback is happening right now as it did back then, ratcheting up the confrontation with teargas and brutality, but this time it’s from that Orange Monster’s secret KBG-styled militant police force in a modern day racist move that is shocking the world.

As directed with elegant grace and confidence by Jack Cummings III, just as he did in the glorious CSC’s Summer and Smoke, the two-part musical piece cruises its way down the road strong and proud like the Freedom Riders of 1961 on the simply designed stage of The Duke, courtesy of scenic consultant Dane Laffrey (Broadway’s Fool for Love), with superb music direction by Deborah Abramson (James Joyce’s The Dead) and orchestrations by Michael Starobin (First Daughter Suite). Each story unwinds, lazily almost, giving us details of interactions that at first seem superfluous, but they are wisely laying roots for later consumption. They give subtle flavors of time and compassion that creep in from the sides quietly, thanks to the fine work by lighting designer, Jen Schriever (NYTW/Broadway’s What the Constitution…), costuming by Peiyi Wong (Sinking Ship/The Tank’s A Hunger Artist), and sound design by Walter Trarbach (Broadway’s SpongeBob…), gently grabbing hold onto some piece of my heart with its honesty and unknown courage. At times in the first half hour, the piece feels unfocused yet quaint, but the seeds have been carefully placed, and the Ruby roses that rise up from those very simple plantings flower with poignant power. Even on second viewing, the knowledge of what comes from their focused placement only leads us to be pulled in deeper, giving off a fragrance that is subtle but overall, completely intoxicating.

Truer words could not be spoken, particularly during that first segment taking place at the Broadbend Nursing home, circa 1961. The kind and determined Benny, perfectly embodied by Justin Cunningham (Broadway’s King Lear) gives comfort and care to the confrontational pain of two small-town women, ensnared in their own battle to paint Green black. At first, it feels simplistic and pointless, albeit gorgeous, in its musical attunement. We wonder where this journey is going to take us and what is the actual point of it all as Cunningham skillfully bounces between characters and postures, giving us a fully unearthed characterization of each of the three souls on stage. His voice is as rich and layered as one can imagine. But once he gets in the driver’s seat, the next stop is the place where an epic hope grows within, and pride and fearlessness blossoms quickly in the inspired heart of the dynamic and detailed Benny.

It’s slow going at first, but the ride is worth the wait, particularly when we are driven into the Broadbend cemetery, 1988, and introduced to the robust but frightened Ruby. As played by the vocally powerful Danyel Fulton (Muny’s The Wiz), the second act finds its maternal heart and core in this woman’s frame, and grabs hold of something earthy that is more than simple storytelling. She pulsates with pain and fear, traumatized by a past that we soon shall understand, and disturbed by the current violence that has once again entered her life and her family. On first viewing, we aren’t made aware of the tangled strings that connect this piece to the first act, but it doesn’t matter either way. There is a resolution that is required and heartfelt, as Ruby begs to understand the better world and the better life promised, in a country where nothing seems to change. It’s not “A Wonderful Life“, this thing that stands before Ruby, but something she must stand up to, and be seen in a way she isn’t first able to tolerate or confront.

Getting back on that bus has never seemed more like the right thing to do then it does today; to ride forward as bravely as those Freedom Riders did. Sitting proudly upright and defiant on a number of interstate buses transversing the segregated southern United States in the early 1960s, challenging the non-enforcement of the United States Supreme Court decisions of 1946 and 1960 (Morgan vs. Virginia and Boynton vs Virginia) that ruled that segregated public buses were unconstitutional. Broadbent, Arkansas is that journey forward, majestically sung by two powerful performers, looking into and questioning the past, and staring forcefully into the present and the future. This timely musical pushes hard on the status quo, just like those brave mixed racial groups did to challenge local laws and customs that continued to enforce segregation in seating, even after the ruling. And just like today’s protesters and the Wall of Mothers standing up to Federal tyranny right now in Portland. Broadbent, Arkansas is a trip worth taking. So be brave and determined. Grab a seat or a Black Lives Matter protest sign, and buckle in for an emotionally charged journey through the complicated past right through and up to our challenging present.