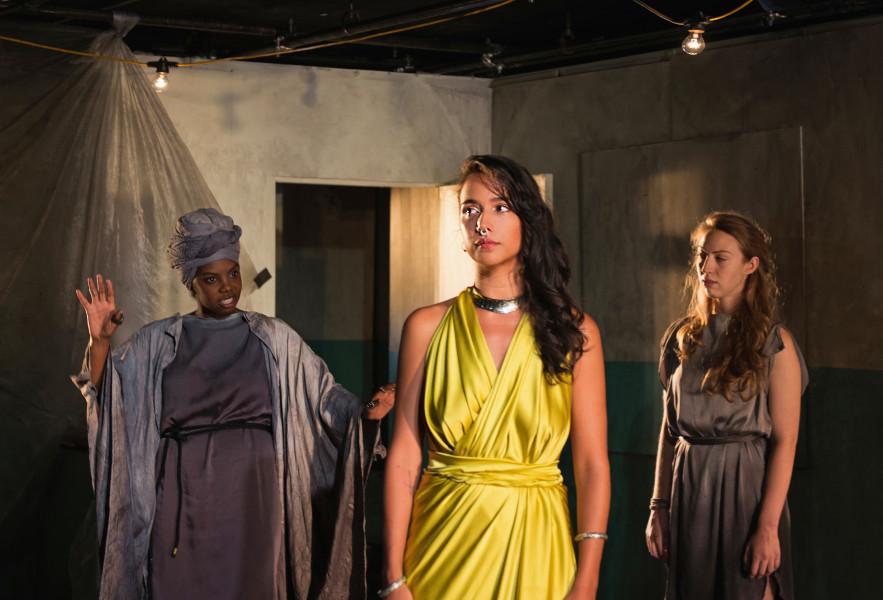 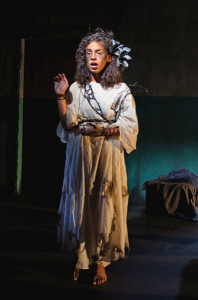 There is a sense of tribal rituals in Ellen McLaughlin’s adaptation of The Trojan Women now playing at The Flea Theatre and furiously acted by The Bats. It seems the Trojan war is much in the minds of theatre companies these days. This production though only an hour is solid but heavy in it’s message and disconnect. Much has been cut and if you do not know this tale of woe you may not understand some of what has happened. My guest would be one of those people, who was a little confused. The Queen of Troy Hecuba (DeAnna Supplee), comes off not as strong as she normally is, after all it was her son Paris that started this problem. Instead Hecuba and the women blames Helen (Rebeca Rad) for this misery. The truth is if the Trojan’s had given back Helen to her husband the King of Greece this would have never happened. 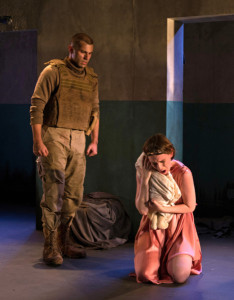 In this production the war is over and the women are asleep. Poseidon (Thomas Muccioli) enters bidding them to sleep as he knows when they awake the nightmares will truly begin. As they wake all the men have been slaughtered, children have been ripped and thrown to their deaths and the women await their fate of being slaves and whores to the men, who have destroyed their loves and their beloved homeland. Cassandra (Lindsley Howard), Hecuba’s prophetic daughter enters. Thought mad and now driven there she foresaw the entire event and nobody listened to her.  Ms Howard is a fascinating actress to watch and she steals the show with her portrayal as she drifts in and out of madness and prophecy. Her costume is that of a bride wrapped in barbed wire on her wedding day and burnt. Marie Johanne Ekhougen’s costumes are pieces of the ravaged world that were once fashionable.

When Helen enters the women savagely beat her and spew their hatred towards her as Hecuba watches with disdain. There savagery is just like what the Greeks did to their land. It is in Rads performance and the bitterness of the other women that we start to understand nobody here is kind or forgiving, humanity is lost.

As Andromache (Casey Wortmann), enters with her young son trying to keep her hope alive, Hecuba mocks her optimism. W hen the Greeks condemn her young son to be thrown from the walls of Troy and Talthybius (a subtle well done performance by Phil Feldman), comes to remorsefully deliver the news, she desperately tries to fight them off. As she fails she becomes more desolate than any of the other women who stand before her. Who Talthybius comes back with her dead son the women bury them in their cloths. This is the last thing they will be reminded off as their city falls and they are lead to their fates.

The lights by Scot Gianelli, the sound design by Ben Vigus are dark and ominous, as is the direction by Anne Cecelia Haney. There is lots of choreography by Joya Powell, which is not necessarily for the best.

This version was originally written in 1995 in response to the Bosnia War and performed by refugees living in New York many if whom where displaced from the war.

War is becoming an everyday occurrence somewhere in the world and this play shows the numbness we have succumbed to. For those who stay positive they are destroyed and for those who see what is coming they are disbelieved. In this version it is a never-ending nightmare.