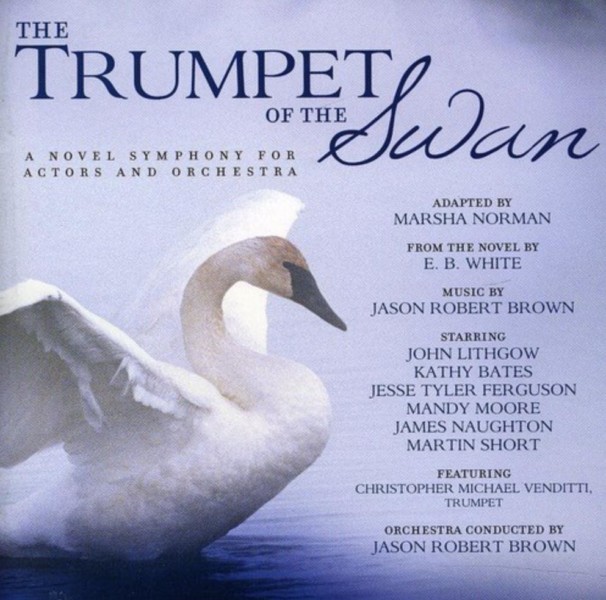 PS CLASSICS, the label dedicated to the heritage of Broadway and American Popular Song, has announced a 10th Anniversary re-release of The Trumpet of the Swan, the extraordinary collaboration between Marsha Norman, Pulitzer Prize and Tony Award-winning playwright (The Color Purple, ’night Mother), and Tony Award-winning composer/lyricist Jason Robert Brown (Parade, The Bridges of Madison County). The Trumpet of the Swan, previously available only as a full-album download, is now available at streaming sites as well, and for purchase and streaming of individual tracks.

PS Classics co-founder Tommy Krasker announced, “It was truly a thrill when Jason came to us in 2010 and asked if we would release his Trumpet of the Swan. It was such a brilliant piece that broke boundaries: just the kind of work Philip and I had tried to champion here at PS Classics. At the time, because it’s such an original fusion of spoken word and symphonic composition, we released it only as hard goods and as an album-only download at iTunes. We wanted people to experience it in its entirety. But heaven knows, the industry has changed a lot since then, and most people now get their music via streaming, and we hated that we were denying new audiences the opportunity to enjoy it. So upon discussions with Jason this year, we decided to make it available at all digital and streaming platforms, so that new audiences would have an opportunity to hear it. I’m hopeful that folks will still choose to listen from beginning to end, as it’s meant to be heard, but I am buoyed by the fact that even if they start by sampling a track here or there, they no doubt will be so bewitched that they’ll want to experience it all.”

For a decade now, children and adults alike have delighted in this story of Louis, the young swan born without a voice, who – with the help of his courageous father and a loyal boy named Sam – overcomes his adversities, learns to write and play the trumpet, and finds fame, fortune and true love in the big world. Based on E. B. White’s timeless children’s novel, The Trumpet of the Swan was hailed by The Washington Post as a “lushly scored work” that will “send you home with a helpless, contented smile on your face.” The Philadelphia Daily News cheered, “the richly orchestrated underscoring and interludes range from big symphonic themes to waltzy pop and swinging nightclub jazz, while the acting/narration draws vivid pictures in your mind.” TheaterManiapronounced it “a sweeping work” with “beautiful and haunting music.” The album was conducted by Jason Robert Brown, and orchestrated by Sam Davis.

PS CLASSICS, founded in 2000 by Tommy Krasker and Philip Chaffin, is a nine-time Grammy Award nominee for its cast albums of Assassins, Nine: The Musical, Grey Gardens, Company, A Little Night Music, Sondheim on Sondheim, Follies, Porgy and Bess, and Fun Home. The label’s catalog includes award-winning cast recordings; solo albums by such artists as Cheyenne Jackson, Victoria Clark, Steven Pasquale, Liz Callaway, Tony Yazbeck, Stephanie J. Block, Judy Kuhn, and Rebecca Luker; and restorations of long-lost musicals, including Vernon Duke’s Sweet Bye and Bye, George Gershwin’s Sweet Little Devil, and Cole Porter’s Something for the Boys. Recent releases include Philip Chaffin’s Will He Like Me?, Christine Andreas’ Piaf: No Regrets, and just this past month, a double-disc set of Maury Sings Yeston, in celebration of the Tony-winning composer-lyricist’s 75th birthday. Visit www.psclassics.com.

Suzanna BowlingSeptember 28, 2022
Read More
Scroll for more
Tap
The Glorious Corner
What To Watch November 22nd To Take Away The Blues