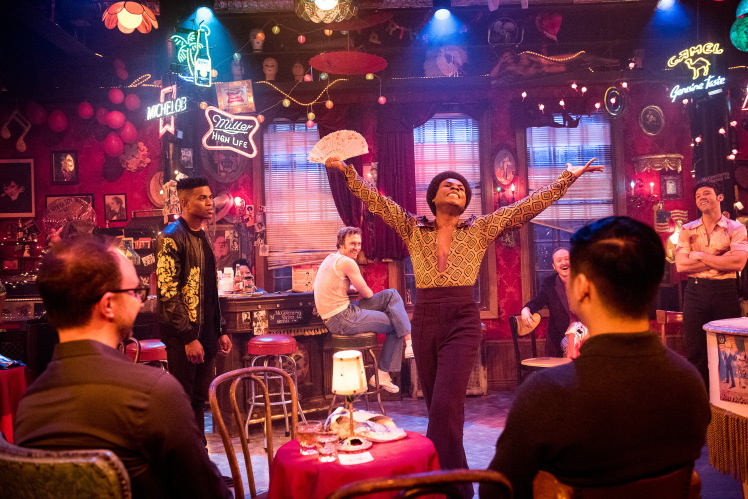 The View UpStairs: A Cast Change Stumbles Down Those Very Stairs

The View UpStairs: A Cast Change Stumbles Down Those Very Stairs

There’s a lovely sweet and sour story enmeshed in Max Vernon’s The View UpStairs. About our creation of family and love to battle the forces of hate and intolerance. Sadly it is lost somewhere behind the heavy handed book by Vernon and the over the top direction by Scott Ebersold. What happened that night in New Orleans is a tragedy, but it was one that I had never heard before this year. The tale was entered into my consciousness, surprisingly, by a different play currently being performed at the Public Theatre a few blocks north from the Lynn Redgrave Theater at Culture Project where The View UpStairs is currently. Gently Down the Stream, the new play by Martin Sherman starring a warm Harvey Fierstein telling us about some moments in gay history as seen through the eyes of his character, a mid-60’s gay man from Louisiana. And one of the stories being told is that night at the UpStairs gay bar in the French Quarter of New Orleans. His telling is heart-breaking and completely captivating, so I had high hopes for this show. 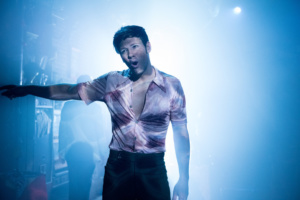 This new musical attempts to give us a peek into that bar, and the gay community that frequent gathered there. It’s a very different time being presented.  A time engagingly represented by the energetic number, ‘The World Outside These Walls‘ that tells of about the dangers being gay in 1973 New Orleans. It’s not a pretty picture, as anyone on the older side of twenty can tell you. Gay rights were just a dream, with most of these people trying desperately to survive the homophobic streets of the quarter. But the UpStairs Bar is a safe place, mostly, where one can gather and relax and express themselves freely. It’s a wild assortment that have gathered on that fateful night, but I never would have guessed the twist that this musical has coming up next. 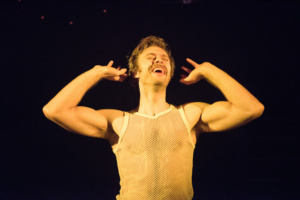 The morning of the day that I was to visit The View UpStairs, I was told by Times Square Chronicles about the amazing cast and the fun I would have. But I’m not quite sure that those who told me saw the same show that I saw that evening. I am told there have been a few cast changes since they saw The View. The actor, Michael Longoria (Jersey Boys) who played the lead, the oh-so-modern Wes at the performance I attended, had previously played the drag queen, Freddy, now played by Anthony Alfaro. I have a sinking feeling that I missed out by not seeing Jeremy Pope in the role of Wes.  And I think the same regarding Frenchie Davis, who used to play Henry, the bar owner, currently being portrayed by April Ortiz. I would have loved to see the two of them in those pivotal roles. From what I saw the other night, none of these cast changes has helped the good natured show. Wes, as the dash of modernization, had moments of strength and emotional rawness, but his vocals were wobbly and unsure.  His characterization flickered from sentimental to arrogant to annoying so quickly, making it difficult to get behind him in his quest to understand. In general, the new group of actors haven’t found their groove yet as a unit. The larger full cast numbers were not harmonious or united, but cumbersome and everyone was too far over the top. Including the one that I heard so many great things about, Nathan Lee Graham as the drag queen, Willie was the most solid vocally but never let down the mask of the fierce queen for a minute, making it hard to connect. Director, Ebersold, needs to tone down the exaggerations even if it is just for a moment so we can see the human behind the protective mask. Ben Mayne as outcast Dale does a fine job with his number, “Better Than  Silence“, as does Randy Redd as Buddy on piano. I just wish that across the board the jesters and theatrics could be toned down just a bit, here and there, so we can fully engage with them all. 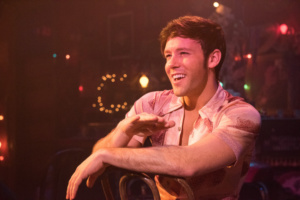 One bright spot of the show is found in the tight pants of the  gay hustler with the heart of gold, or at least his heart is filled with a desperate need for love and connection. Vocal good, Taylor Frey as Patrick found some humanity and vulnerability in the posturing, and he also looked great in those tight pants while singing the fun, “What I Did Today” and the love duet, “Crazy Notion“.  It is a crazy notion, that a show about unity can feel so disjointed. My hope is that I saw this cast as they just began the task of getting to know each other in these parts.  And that over time, they will improve and come together. But right now, the show needs to work harder to bring unity to this tale of that tragic night in New Orleans. The View UpStairs is a bit messy and vocally struggling, but maybe somewhere underneath the brace fierce face put forward, a good show . I hope over time they come together and raise this show up again to where I had heard it hung out before. That’s a View I would like to have seen. 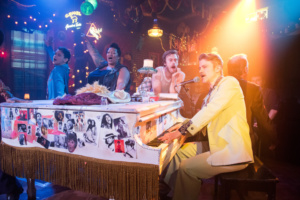