The Warning Lights On The Radio Tower Flash Weakly Albeit With a Vocal Power That is Impressive. 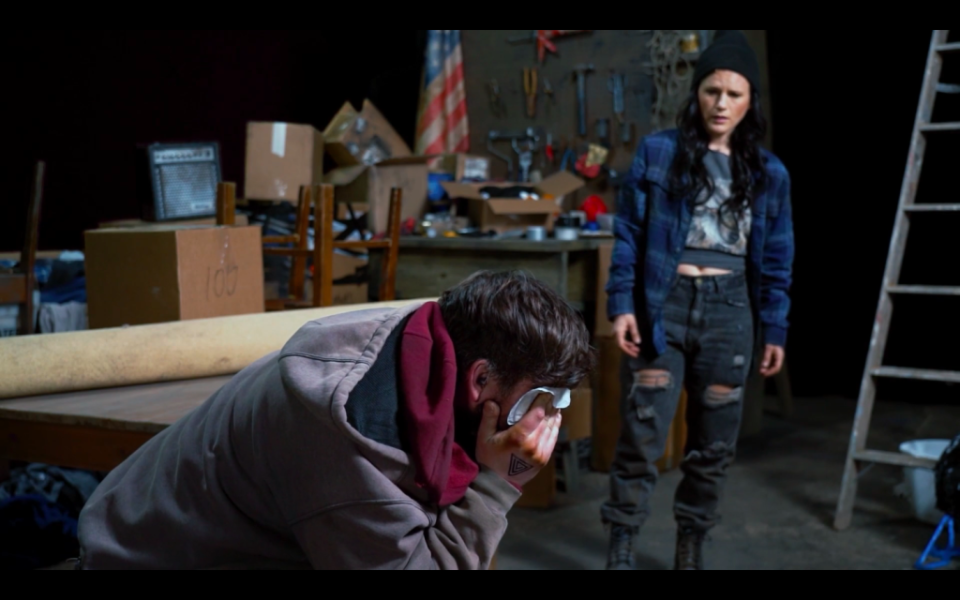 The Warning Lights On The Radio Tower Flash Weakly Albeit With a Vocal Power That is Impressive.

Ashes to ashes, dust to dust, so that saying goes, and somewhere inside the rock musical, Lights On the Radio Tower, death and dying floats in the air, and scatters itself onto the ground with an undramatic dull thud. The beginning lulls us inward, attempting to set us up for the dynamic reunion and reconciliation of two damaged siblings who lost each other one fateful night, but like most of the show, it falters finding passageway into the complicated anger that exists within. Circling back again to one another after eighteen years apart, the two-person musical that was originally developed at the Adirondack Theatre Festival and Bloomington Playwrights Project, unpacks a decent foundation against a shadowy backdrop of drunken parents fighting without finding the earth underneath their feet. The actors, both very accomplished singers, try to find their vocal footing in the decrepit garage of their familial home, only to get lost in the clutter that surrounds them. Somewhere in this pounding anthem-filled musical, the coming together could have been intense, but the duo only get to be fired up with a bipolar edge, swinging back and forth from anger to engagement with such force, you might need a neck brace by the end of this ninety-five minute rollercoaster ride.

Flying with a full force back into each other’s life, the two performers dig in to the material with musical determination, playing out the dynamic of a story centered on regret, reconciliation, and a tense but unbreakable sibling bond. But the writing swings wide and big like a huge pendulum thrown with a force into the air, hurdling back with such momentum that it could literally hurt someone who wasn’t paying attention. Luckily, the two leads, Carrie Manolakos (Broadway’s Mamma Mia!) and Max Sangerman(Studio 42’s Smokey Joe’s Café) have the thrilling solid vocal range to power through from one rock song to another. Their voices are the true stars here, showcasing an angsty edge that matches the musical genre that has been assembled here. I almost would have prefered if we just let the two play guitar and sing for us on stage, like the well defined song “With You“, backed by a similarly well constructed band without all those complications of this awkwardly written family reunion, but alas, come to think of it, I don’t know if these simplistic, sometimes nonsensical, songs would have held my attention as much as these two actors’ voices deserve.

Lights On The Radio Tower tries very hard to give some credibility to the story of Molly and Jesse, finding only adolescent contrived fizz in the Dr. Pepper juice of his tense return. Jesse has made his way back to their decaying childhood home following the death of their difficult father after eighteen years away. I’m not going to pretend that it makes a lot of sense overall, that he knew to return, and how, but that’s not the point. The main edge is that Molly doesn’t greet him with open arms or tears of joy. You see, she stayed put, taking care of the damaged goods that represents their shitty family history, resenting him for the whole situation she trapped herself within, while he got to live out his truth and his freedom (although it doesn’t appear he had an easy time at it in his life). With book and lyrics by Emily Goodson(Sticks & Stones: A New Musical Featuring the Work of Neko Case) and music and additional lyrics by Kevin James Thornton (How to Get From Here to There), the siblings have a ton to unpack in that disgusting garage, literally and figuratively, but the energy and authenticity falters, dodging with insistence back and forth from anger to engagement with such an alarming force that it is us who in the end feel played and betrayed. Jerked around from one moment to another, we don’t believe in them, and we definitely don’t know how to feel for them, because, in all honesty, none of it rings true.

Directed with a heavy hand by Gabriel Barre (Amazing Grace), the stance that exists between the two runs wild, flailing between tender engagement and false rage with unnerving ease, far outpacing their simplistic and unrealistic mood swings. There is obvious familial trauma here, naturally, that revolve around the shadowy figures of abuse and neglect that is their communal history, but it all feels too neat and easy to be that emotionally complicated. With the inflammatory recollections from their “messy messed up together” childhood played-out without much realistic heart and soul, the story plunges onward heavily, projected out for us by Scott James, who served as the straightforward director of photography. The drama is stereotypically violent, with the comic relief bordering on ridiculous – Tom Selleck, you deserve much better. The piece attempts to pull us in by shining a harsh light on the damage that is inflicted upon these two, especially that last complicated night together almost twenty years ago. It’s all centered around a sneak-away teenage gig at the neighborhood bowling alley that ends with Jesse being harshly forced away from the family, afraid to return for almost twenty years. Unfortunately for us all, the pain and heartbreak never truly sneaks its way under our skin, even as the creative team works overtime to try to bring some magical authenticity to the event, with music direction, orchestrations and arrangements by Geraldine Anello (We Are the Tigers), production design by Jefferson Ridenour (Party Face), sound design by Jim Petty (The 8th) and Ryan Hall (Oh! War) giving it their all. Sadly, the Lights on the Radio Tower never really finds the electricity to shine bright enough to tune us in, like the intended moths to the flame. There’s too much static.

Like that moment when we find that perfect station on the radio during a long highway drive through the night, this tale of unprocessed adolescent anger and betrayal should have grabbed hold of our hearts with ease, as the musical memories and energy unpacked before us could have produced some pretty difficult truths to engage with, but with resolutions that are too convenient and simplistic, the wires never spark true. With a less obvious and clumsy book and some wiser entanglements between the randomly collected rock songs, Lights on the Radio Tower, could have flashed red with a force to be reckoned with. But as this filmed show stands now, haphazard and bipolar, these Lights on the Radio Tower, produced by Five OHM Productions and Indie Theatrical, blink weak in the darkness of the road, failing to be “my silver metal” in a sea of angst and betrayal.

Lights on the Radio Tower will be released for streaming on May 18, 2021 and will be available through Tuesday, June 1, 2021. The Lights On The Radio Tower band includes Geraldine Anello (piano), Paul Adamy (bass), Robert Morris (electric guitar), Micah Burgess (acoustic guitar) andGary Seligson (drums/percussion). Tickets are available at http://lightsontheradiotower.com. Purchasing a ticket offers the viewer access to the musical for 24 hours.