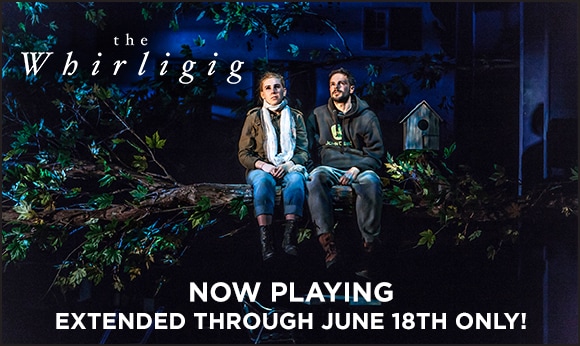 The Whirligig A Cycle of Pain

The Whirligig A Cycle of Pain 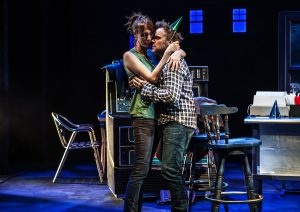 Hamish Linklater’s new play The Whirligig, is wrapped in grief, yet you laugh at the insights on life. They say you laugh most when you are in pain. The Whirligig now playing at the Pershing Square Signature Center, the New Group’s production is filled with some amazing performances, especially Jon DeVries, but don’t count out Norbert Leo Butz and “Girls” Zosia Mamet. 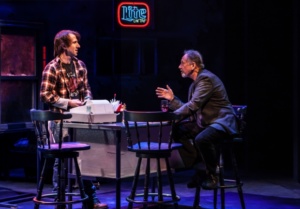 The show finds Michael (Mr. Butz) and his former wife, a psychologically depressed Kristina (Dolly Wells), at the hospital bed of their 23-year-old daughter, Julie (Grace Van Patten), a heroin addict. Julie has come home to die. Her doctor Patrick (Noah Bean), comes home to his ex-convict brother Derrick (Johnny Orsini) and tells him about his young patient. Derrick steals the file of Julie and camps out in her tree, where he meets Julie’s ex-best friend, Trish (Ms. Mamet). it seems everyone has been estranged and Julie’s death will unravel the mystery. 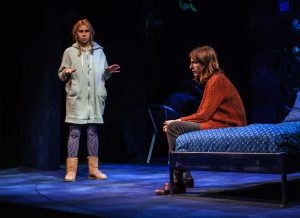 Michael it seems an alcoholic drama teacher, who quotes from the classics. He ends up in the bar where Greg (Mr. Hurt), the bartender who had gotten Michael sober years ago with a 12-step-program and is married to Trish. Greg and Trish are ex-junkies. At the bar is the prolific Mr. Cormeny (Mr. DeVries), Julie’s former english teacher who waxes poetic. It seems at one time Patrick was a bartender there, earning money to be a doctor. 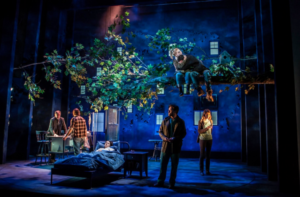 The Cast Photos by Monique Carboni

As the play progresses all of these characters are deeply flawed and have been in and out of each others lives for 15 years, though how is the mystery.

I have to admit, I figured out the who, what, where and why in the first scene of the second act. If you pay attention in the first act the clues are all there.

Each actor is given monologues and dialogue that actors dreams of. Too many this play will seem overwhelming, as if too much has been stuffed onto this canvass. The actors are all sublime and the direction by Scott Ellis is a dance of destruction nicely played. I found this show so emotional I was laughing through the first act and in tears by the end.

Mr. Linklater’s play The Vandal was smart, funny and touching, his new work The Whirligig has those same qualities. He creates flawed individuals, who state mammoth truths, which sadly are relatable. The most touching moment is when Julie who is dying asks those who have come to say good-bye not to look at her. Even in death, her insecurities rage and win.

Scott Elliott’s direction is clean and moving. Derek McLane, set of tress in full bloom was revealing and hiding those things in life that are right in front of us, but we miss do to the simplicity of something so normal. This was enhanced by Jeff Croiter’s lighting.

This play is a whirlwind of emotions, life, death, how we all effect one another and how easily things can get fractured. I challenge you to take a look at this fresh voice.

Suzanna BowlingJuly 28, 2022
Read More
Scroll for more
Tap
Is Building The Wall A Psychic Prediction Of What’s To Come?
Judith Light is Honored With The Monte Cristo Award