The Wild Energy of School Girls Explodes Inside Mac Beth 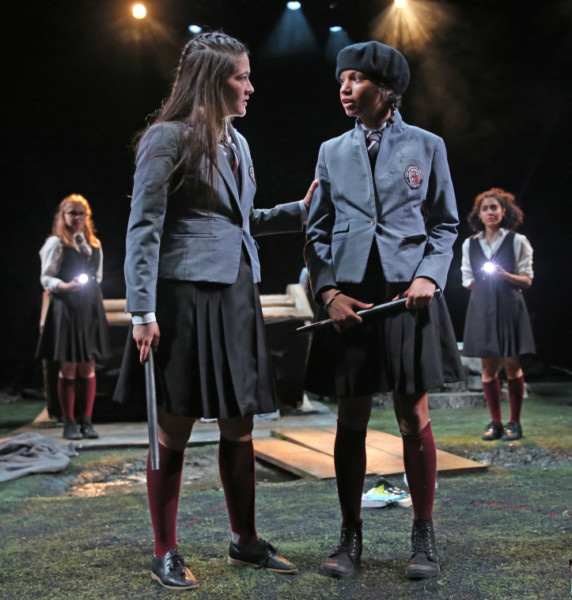 The Wild Energy of School Girls Explodes Inside Mac Beth

Played out in some empty lot under a cloudy dark sky, a group of school girls dive into a restructured and enlightened Mac Beth, courtesy of Red Bull Theater and the director/adaptor Erica Schmidt (Old Globe’s Richard II), in order to find their collective internal demon and lash out at the system that holds them cloistered and restrained. It’s a breathtakingly brilliant recreation, one where the three weird school girl sisters, giddy and purposefully played with energy and glee by Annasophia Robb (Hulu’s “The Act“), Sophie Kelly-Hendrick (PH’s Theatre School), and Sharlene Cruz (Harlem Rep’s Den of Thieves), cast a spell over the square lot (and us), finding the mischief and the cleverness in each line and movement. They carry the modern and the iconic with ease, all the the young female actors, bringing in references to classes and texts when needed. Their heat and force is found in the conjuring of the great quell, dressed appropriately and smartly in uniform by costume designer Jessica Pabst (Vineyard’s The Amateurs), as school bags are stowed and Shakespeare’s iconic text is manipulated: heightened, enlargened, and tightened into a condensed but powerful one act piece of storytelling. “Bow down to these bitches” as what Schmidt has accomplished in her restructuring shows her to be the “dearest partner of greatness” to the text and strength of purpose. The young deviously adolescent women sell us this story with an energy and intensity too wild and wonderful to miss. It’s poetry, passion, and pleasure, played out to feed our voracious souls and to give a ferociousness of feeling to these girls, riding high on that perfectly played couch, immersing themselves in the dark savage Scottish text.

Isabelle Fuhrman (TNG’s All The Fine Boys) as Macbeth is as seriously voiced as you could hope for and want in the lead role. Frantic and spell-bound in that back lot in front of that turned over couch, we find ourselves thoroughly in Macbeth‘s Scottish heath, courtesy of the wondrous scenic design by Catherine Cornell (Heritage Theatre’s Harvey) and stormy lighting Jeff Croiter (Broadway’s Bandstand). The moment when Lady Macbeth, perfectly inhabited by the glorious Ismenia Mendes (CSC’s The Liar) states the steadfast purpose in their shared desire is spellbinding; as still and powerful as the witchcraft could celebrate or the disturbing obsessiveness of her hand washing. Banquo, as portrayed with slyness and silliness by Ayana Workman (Public’s Romeo and Juliet) rises to the occasion to every conceivable moment, even when she has spilt wine to deal with, finding hilarious power in her zombie ghost haunting, and driving forward the delicate balance of girlie pleasure and adolescent obsessive violence served up with Twizzlers, loud mosh pit music, and phone videos.

The deep emotional sounds of dogs barking in the night and thunder, beautifully integrated by sound designer Erin Bednarz (Rattlestick’s The Convent), ricochet, float, and respond to the boisterous young girls wild abandonment in the rain. Their energy fills the air and space with tension in their discarding of polite norms and engagement with the witches’ mischief. Arriving late to the party, Macduff, portrayed with solidness by Lily Santiago (George Street’s A Doll’s House, Part 2), feels it like a man even when punished or scolded by the others, only to dispute it like a man. The gendered references by these young women to one another, particularly about being manly and purposeful shakes up our senses in what these words all mean, especially in a play where women play a deciding factor in pushing Macbeth forward. It plays with our head in just the right manner, poking and prodding us to reevaluate gender norms and assumptions, much like the cheeky drunken porter fulfilling his theatrical duty and teaching us about the follies of letting go. Much can be learned by this incantation, like the simplicity of this cast of seven bringing a forest and an epic battle to the forefront with deliberate action infused with a successfully dynamic and emotional weight.

Schmidt’s Mac Beth caldron is diabolically tended to with a silly power of teenage angst and anger just under the lid, but it gets a bit sloppy and hard to comprehend for a brief spell with the savage rain dance and the parade of baby kings. The electricity overrides the word play and drama in that high energy and somewhat chilling moment, but the movement coordinator, Lorenzo Pisoni (Broadway’s Gary) pulls it in while firing up the violent energy that is slowly taking over these girls. This Mac Bethpulls them into the darkest of deeds, almost as if the earlier Lady Macbeth was leading them with her mad drive. Wine will be spilled, and the three weird school girl sisters will fly off into the night, leaving us shaken by what we just witnessed and the brutality that lies just under the pressed uniforms of these young ladies. It’s dynamic and gloriously barbarous, this Mac Beth, and even more shockingly vicious and merciless coming from the tender hands of these young school girls. Be ready, and “remember the porter“.