The Windy and Spooky Weir Streams in from the Irish Rep 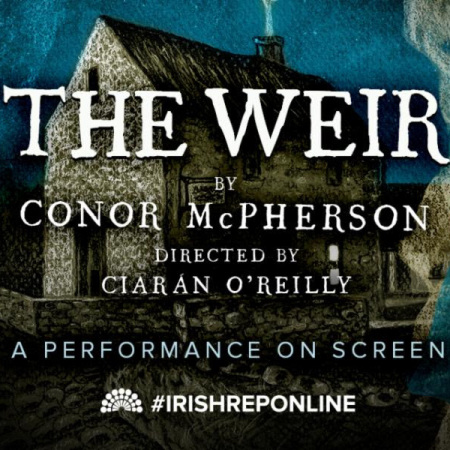 The Windy and Spooky Weir Streams in from the Irish Rep

They are getting better and better these windy wild days and nights of isolation, and this theatre junkie can’t be more thankful to the artistic team behind the Irish Rep Theatre‘s virtual performances of The Weir. The superbly written play by Conor McPherson (The Seafarer) breathes a ghostly life into the theatrical venue of the internet finding intertwined humanity in the digital form. I was worried going in that the screen of my television would be parceled out into zoom meeting-style boxes with the cast calling in their performances from across the far stretches of the land. But under the wise and witty care of director Ciarán O’Reilly (IRT’s Shining City), the technical team found a way to give us something we haven’t seen before, and interaction that, although sometimes seemed forced, felt real and personal. The well-crafted presentation created, through the use of blue-screen and a mapped-in, detailed backdrop (thanks to Video Editor: Sarah Nichols; Scenic Designer: Charlie Corcoran; Sound Designer: M. Florian Staab), a way to give us about the closest thing I’ve seen to the idea of theatre and in-the-moment staging, without bringing the actors onto the stage face to face, and less than six feet apart.

Starring the formidable team of Dan Butler (RTC’s Travesties) as Jack, Sean Gormley (Theatre Row’s Shadowlands) as Finbar, John Keating (TFANA/Arin Arbus‘ The Winter’s Tale) as Jimmy, Amanda Quaid (Duke’s Cock) as Valerie and Tim Ruddy (MTC’s Pumpgirl) as Brendan, a remote country pub in Ireland turns into an evening of ghost stories told with impeccable timing with an intricate edge. One by one they arrive, these gentlemen of the town, with the wind blowing ferociously outside, and the air tense with intriguing energy inside. It is all because Finbar, the only married one of the lot, is bringing in to introduce to the natives a pretty young female newcomer, Valerie. The drinks flow like water (so much so that I would be under the table seeing ghosts by the time this one hour and fifty-minute play comes to its tight swift end), and the eerie cold blackness drifts in like fog under the rattling door. Strange tales are told, dark like a winter’s night in the country, with each storyteller relishing in the details of the yarn.  The creaks and the gusts of the howling wind elevate the tension of the men’s clear-minded ghost stories. They send a few shivers down the spine, maybe from all the drink or from the high fever, but it’s Valerie who puts the final chill in the air. She hypnotized the space, forcing all eyes wide open, not just with Quaid’s perfect tender telling, but with the authentic air of mournful sadness and loss. The men stand down, not knowing what else to say. The minutes tick by until they right themselves, finding the heartfelt care required, and the humanity to get them home safe and sound.

Her story is the reason she finds herself escaping to the remote town far from her Dublin home, as it is etched with melancholy and utter sadness. The ghostly haunted twist shifts the focus from the men trying hard to impress or engage the young woman with their stories, to a more authentic understanding and focus. The cold dark air outside feels like it is obliged to stop creeping in under the door, and a whiff of salvation and something akin to hope, can be found mixed in with the aroma of short ones and beer. After Finbar and Jim make their way out, it is Jack who unpacks an authentic story of loss for Valerie and Brenden that is just as haunting, but only becomes it comes from his heart, not from his ego or the realm of the supernatural.

As presented here in digital form by the Irish Repertory Theatre, the one-act play makes us feel the loss of love, of attachment, and even the loss of live theatre, but only because this presentation comes so close to the real thing that we can’t help but remember all that we are missing in our own windy dark isolated nights far from The Weir. So find your way into that pub, grab a pint, and settle in for the simple pleasures of a well-told tale on a haunting windy night at the theatre.

The Weir is part of Irish Repertory Theatre’s 2020 Digital Summer Season series A Performance on Screen. RESERVATIONS ARE FREE
Irish Rep suggests a $25 donation per viewer for those who can afford to give.

Advance reservations are required. Your event link will be emailed 2 hours before your selected performance begins.