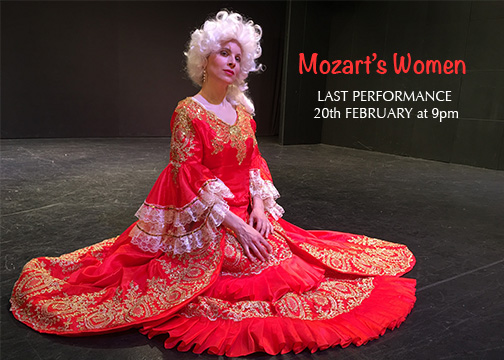 Where do you go if you are a young playwright and want to have your play produced? The answer is the NYWinter and NYSummerfest’s. This year at the Winterfest Robert Williams gave 56 plays, 7 musicals and 27 shorts a chance to perform, be seen and reviewed. The festival ran from January 2nd to March 12th with 70 productions making it to the stage. Each brought their own unique story, perspective, designs that inspired and captivated their audiences. Each was required to enlist the bravery and inventiveness of live theatre that didn’t rely on special effects, Hollywood stars or huge budgets.

Thanks to Robert Williams, young talent was recognized and celebrated tonight, after 3 long months of innovative theatre being given life. Last night performances from each of the nominees gave the rest of the audience a chance to see what they had been missing and it was an impressive round-up. 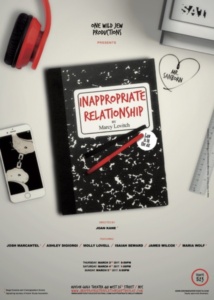 In keeping with fairness every category was tied except for: Best Stage Manager:  Melanie Aponte from Inappropriate Relationship, Best Set Designer: William Spinnato, Suzanne Anoushian, and CJ Yeh from Nell Dash and Most Creative Play to Mozart’s Women by Gudrun Buhler. Ms. Buhler actually won three times tonight making her the biggest winner of the night. Each of these categories took home $200.00

5 performers out of 171 were nominated for Best Actress, with the winner receiving $500. Tiffany May McRae – from The Weekend Will End and Tracy Weller from Family Picnic showed such a variety of different styles. Ms. McRae was intense and dramatic and Ms Weller quirky and avant guarde. I am sorry I missed Ms. McRae’s performance and the show The Weekend Will End.

5 out of 190 were been nominated for Best Actor, with Patrick Hamilton from These Little Ones Perish and Scott McCord from Peace and Quiet splitting the $500.00 prize. Mark my words you will be hearing more about Mr. McCord. Again I am sorry I did not see his entire performance.

5 out of 70 were nominated for Best Director, with Lola Lopez Guardone from These Little Ones Perish and Dennis Corsi from Nell Dash taking the honors and splitting the cash. 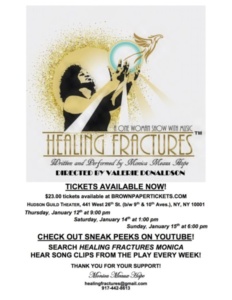 7 singers out of 54 were nominated in the Best Singer category with Gudrun Buhler for Mozart’s Women and Monica Meaux Hope for Healing Fractures splitting the $250.00 prize. This was a terrific reason why the prize should be split. With Ms. Buhler’s angelic operatic purity and Ms. Hope’s miraculous vocal range and heavenly gospel sound, there was no comparison.

Best Music Score for $300.00 was shared by Conor James from When Love Goes Sour and Paul Rigano for You Heard it Here. When Love Goes Sour was another missed show I would have liked to have seen. With it’s contemporary pop sound, I am sure I will be hearing more from Mr. James.

The biggest prize of the night of $1250.00 went again to Ms Buhler’s Mozart’s Women who shared the prize with Larry Philips’s The Weekend Will End as Best Play or musical. Making this a special night for the talented Ms. Buhler.

The best part of last night was Ms. Buhler’s last speech. She stated how glad she had won, but remembered all the times she hadn’t and encouraged the other nominees and participants in the festival to keep on creating. As Ms Buhler stated “nobody can take your creativity from you.”

The NYWinterFest offered so much to the playwrights, actors and the audience. I have attended many festivals and the caliber of talent and the support that they receive is impressive. With the NEA in jeopardy, it is nice to know there is a place that offers a sounding ground to construct the future of theatre.