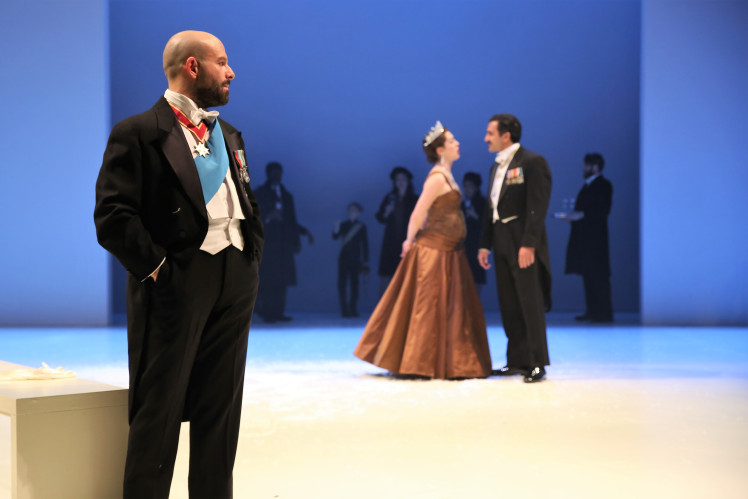 The Winter’s Tale: To Bare or Not to Bear

The Winter’s Tale: To Bare or Not to Bear

There’s a lot to be said about the beginning of Theatre for a New Audience‘s production of The Winter’s Tale, a wonderfully rendered production of one of Shakespeare’s ‘problem plays’. This is mainly because the first three acts are filled with intense psychological drama, while the last two acts are remarkably different in tone, comedic, pastoral, and with an ending that is surprisingly a happy one. The first three acts could be considered a classic tragedy in and of itself, but the second part is a different kind of play, leaving many bewildered and not just because of the non-sensical location and production instructions.  The most famous being the stage direction: “Exit, pursued by a bear“. And within those simple words, a structure of the opening and a general mood for the play in its entirety is adopted by the talented director, Arin Arbus (TFANA’s Measure for Measure).  The bear in question doesn’t wait around to be summoned midway through this tall tale, but arrives first thing, frolicking in the snow, parading around joyfully with claws exposed but a dance in his step. It is not known what Shakespeare intended when writing those infamous directions.

Is this creature actually fully required to move this play forward, or was he a playful addition or amusement? Did Shakespeare himself use a real bear from the London bear-pits (I’m hoping not) or did he dress up an actor, much like costume designer Emily Rebholz (Broadway’s Dear Evan Hansen) has done, in a bear costume?  Regardless of his creative thinking, Arbus has decided to utilize the bear as a tell-tale sign that, like Shakespeare and the what the title of this play suggests, The Winter’s Tale is a story that is basically chimeric, untethered to realism with a grand tragic structure laid on top of the first half to give resonance to the overall. Traditionally speaking, it is thought that a true winter’s tale is something told to children around a roaring fire, an old wives’ tale told for pleasure and distraction, or some type of legend based in a fantastical land that has nothing to do with reality, all of which offer the audience a promise of a happy ending and should not be taken seriously. And what better way to elicit that reaction then to see an actor obviously dressed in a bear costume playing on stage, seemingly dangerous but theatrically fake and ultimately harmless, hiding away for his entrance later. It’s slightly ridiculous and distracting, a concept we will have to bare, but Arbus’ point is solid in the making even as it doesn’t fit entirely well with the mood of the first half.